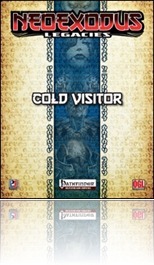 All right, still here? The PCs in this module have been employed by one Sheik Arjouf ben Ibrahim to travel to an island off the coast of Gavea, contested between Dominion and Caneus Empire. The problem is – the Nexus Gateway they are to use for transportation instead dumps them right at some damaged archway, the magic of the archways runes fading fast. A searing cold wind blows right into the PC’s faces and a person clad in thick winter’s robes greets them as newcomers to this strange arctic place called Praegelidus. Following the lieutenant Orgun through the blizzard from continual flame post to continual flame post, should show the PCs how deadly this climate is and also set the mood for the rest of the module – a struggle for survival. Now the PCs are soon led to the camp and here, they will meet Captain Penser, commander of the green griffon mercenary unit and Silas Fedders, head of the researchers secluded in this place.

The first day in the camp is thus spent with establishing no-go areas for the PCs (we know how players love these) and questioning the PCs on the outside world – their reactions to these probing will determine how all the NPCs will treat them later on. Wise PCs are nice, since in the camp military-style hierarchy, they are right at the bottom and should not complain too much about the menial labor that is expected of them. On the second day, at breakfast, things seem to start to get…weird. Perceptive PC will notice researcher Morkin mentioning that “it” is gone and soon afterwards the first body is found and it will not remain the last – the second one has been dragged outside from the watchpost and thus, a search-team will be sent out – containing the PCs. In the dread cold of Praegelidus, it will take 2 miles before they find private Suven – confused, frostbitten – and, unbeknownst to the PCs a shell of an elder evil bound by First One magic to this demi-plane. An elder evil that has been awakened by Silas’ meddling and the proximity of all those delicious souls…

If you haven’t realized what the inspiration for this was: Think John Carpenter’s “The Thing” with the added complication of no technology, being at the bottom of the food chain and completely unequipped for the clime. *diabolic laugh*

Worse, while the PCs are outside, captain Penser gets a visit from Pah’tharsus’ shard, a fragment of the beast and the culprit of the soul shells – two further privates are turned into soul shells and captain Penser is gone – and with him, the central authority figure of the mercenary company. Upon their return, Lieutenants Orgun and Jandis thus quarrel for leadership of the company, further adding to the atmosphere of paranoia that will be further be enhanced by separating PCs with the menial duties they are still supposed to perform. Over the next couple of days, the shard will continue its slow and inexorable war of attrition – soul shells are, after all practically indistinguishable from regular folks and attacks every 4 hours should soon result in at least 4 of these soul-gathering sleepers. Add to that paranoia between regular privates, an attack on the dogs supplemented by two soul shells demasking as a distraction and further attacks (possibly also on Elise, one of the scholars) and we have ourselves a neat climate of distrust, paranoia and fear. Worse, the Pcs will soon be accused to being soul shells or the instigators of the deaths, the still will blow up and its fire, if not quenched, start to burn down building upon building. Hopefully the PCs can manage to survive to day 4, where an all-out snow-storm will give them some respite from the shard’s attacks – only to have it attack en masse with all its soul shells on the following day. Hopefully the PCs have by now pieced together the clues – in order to strengthen again the prison of Pah’tharsus, they must translate the First One glyphs on the archway, find out that Silas has gone batshit crazy and deduce from his journal the true nature of the killer and origin of the shards. With this information, they may have a chance at finding the correct tome that contains the necessary ritual to be performed at the archway – a final dash through the howling winds while beset by Pah’tharsus shard(s) (soul shells have a nasty habit of turning into these…) will be in order.

Now this being essentially a horror sandbox with a timeline, the camp is provided in excessive detail – including the necessary gear for survival in these hostile climates. The compound is heated by magical heat stones and if you’re a sadistic DM like yours truly, you may, slowly, but surely, start taking them away via shards and shells, one by one… It should be noted that the camp is provided in a nice, player-friendly b/w-map and that we get a total of 8 hand-outs as well as features of the demi-plane. Think survival horror with magic is too simple? Well, divine magic in the demi-plane works unreliably at best and summoning, blink and similar effects automatically fail and channeling has its effects halved. To aid the DM with his cheerful task in this module, we also get full environmental details for the snow-falls, wind etc. as well as full stats and a neat artwork for the shard, the shell-template and full stats for all the relevant NPCs – commendable!

Editing and formatting are very good and while not perfect, show that the guys from LPJr Design can do it if they set their mind to it – all in all I encountered less than 5 glitches, all of which minor. Layout, as with any LPJr Design-publication, is drop-dead-gorgeous: 2-column, full colour and even the alternate printer-friendly full-colour version is a joy to the eye. Speaking of joy to the eye: While I’ve seen some of the many b/w-artworks in the module before, they all serve to enhance the excellent atmosphere of the module. Furthermore, you’ll get neat (stock) b/w-artworks for all the dramatis personae (which btw. have been compiled in a list for your convenience) to show to your players, which is also a huge plus. What is NOT a huge plus is the lack of bookmarks – a module of this length should definitely have bookmarks, especially since timeline and location are two separate beasts. I heartily recommend any DM wishing to run this to print this out. Also, the cartography is not particularly helpful or nice to look at.

Modular, sandboxy, urgent, dishing out paranoia and atmosphere by the spoon and mixing unique NeoExodus-style with a healthy dose of horror that could be either focused on gore, psychological warfare…or both, all depending on how you run it. This module is a glorious offer and mops the floor with its two predecessors in the NeoExodus Legacy-line – not only is it longer, better edited and tighter written, it is also much more detailed, concise, offers more room for PC-choices and should be considered a stellar horror-module for any setting, not just NeoExodus. I wholeheartedly recommend this module for all DMs seeking to put a certain sense of dread back into their players, who want a change of pace…and of course for all aficionados of horror. Though admittedly, a DM should have a bit of experience to properly convey the rising paranoia and atmosphere, several troubleshooting tips should make sure that the module works. Still, a bit of experience when playing multiple characters can help. Lee Hammock, Chris McCoy and JP Chapleau have created a module with this I can wholeheartedly recommend, and were it not for the lack of bookmarks, would rate 5 stars + seal. Especially due to the lack of them and the relatively scarce, undetailed map, I’ll have to scale down to 4.5, rounded down to 4 for the purpose of this platform! Still, this module represents infinitely more the quality I want to see for the product-line and reading modules like this is what makes reviewing fun.