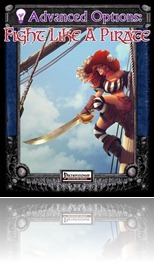 This pdf from Super Genius Games is 10 pages long 2/3 of a page front cover, 1 page SRD, leaving us with 8 1/3 pages for pirate-themed archetypes, so let’s take a look!

Barbarians may opt to become Ex-conscripts, who may replace uncanny dodge, trap sense and fast movement with enhanced swimming and a scaling minor bonus to AC vs. ranged attacks when charging, +1 to melee damage and +1 to acrobatics when jumping.

Cavaliers may now opt to become Ship’s Officers, who replace mounts with inspire courage and banner with the ship’s pennant, which essentially acts the same way. However, the pennant also improves at later levels, as a class capstone granting +3 to attack and saves vs. mind-affecting effects and immunity to fear to allies within 60 feet – which is ridiculously weak for a capstone ability.

The new Fighter-archetype is the Mariner, who exchanges his proficiency in the heavier armours with proficiency in mariner’s armour (lighter versions of common armour that are less restricting/cumbersome and provide less AC, unless you’re in cover or for the purpose of crits, in which case they work at the original armour’s full AC), may select “Pirate Weapon Training” and ignore squares of difficult terrain. Okay, but not too exciting.

Gunslingers get the Sea-Dog archetype, who may use ropes etc. to temporarily get the equivalent of a fly-rate (YEAH!) equal to movement, replacing the pistol-whip deed and also make attacks that ricochet and e.g. use ship-components as ways to incite manoeuvres via your ricochet.

Inquisitors can turn ship hunters now, gaining bonuses against whole ship and their crew and they also gain a cool capstone, that adds the broken quality to a ship or sinks it. Cool. BUT: The ability does not specify what kind of action the ability takes, which range it had or HOW he does it – it is a (Sp)-ability, but can it be dispelled/counterspelled? If so, as what level does it count? Unusable as written.

The Magus archetype is the Picaroon, who loses proficiency with armour and shields and also 1 spell per level. To offset the lack of armour, they may add Int- in a limited way to dex and later also gets limited access to rogue talent. Ok archetype, but somewhat bland.

Monks may opt to be seaswains, who are not restricted by alignment and also get their Monk AC when flatfooted or touch attacks, but is diminished. They may also flurry with blades and get a minimum damage-dice for weapons that scales with levels as well as the option to move along ropes etc., gain nourishment from alcohol and finally become even an elemental. This archetype is rather complex and my favourite one so far.

The Paladin archetype is called Crown Privateer – his aura of courage working only on a ship, but on ALL on the ship and the same holds true for his other auras. Interesting archetype.

Rangers may opt to become Navigators, who increase naval travel time, enhance allies with morale boosts and the final one, the Rogue, now can turn lookout, gaining superb perception skills as well as a bonus vs. illusions.

The pdf also includes stats for two weapons, the mariner’s armour template and for basket hilts.

Editing and formatting are very good, I didn’t notice any significant glitches. Layout adheres to SGG#s 3-column landscape standard and the pdf has no bookmarks, which is a pity.

I like the basic idea of this pdf – providing archetypes to give classes not associated with a certain theme to work is a good idea and questions like e.g. “What is a barbarian-pirate?” are neatly answered and should help make “non-naval” classes more fitting for campaigns à la Freeport or Skull & Shackles. I’d like to see similar pdfs for other themes/climates etc. That being said, I’m not a big fan of many of the archetypes herein: Take the Inquisitor-archetype: Only two abilities, which, while cool, still make this modification not distinct enough for my tastes. The Cavalier is also neat, as is the one for paladins and gunslingers, but my favourite would definitely be the monk archetype, the only archetype in the pdf I’d consider truly well-made, all the other felt like either too short, not distinct enough or like they’ve fallen flat of their own potential. Unfortunately, there also are minor rules-ambiguities to be found here and there and not all classes are covered by author John D. Halpin- which is also a pity.

While by no means a bad collection of archetypes, I’m spoiled with regards to them and when compared to e.g. Abandoned Arts Paladin Peacebringer or juggling Galivant-bard, these mostly fall flat. Introducing mechanics that interact with naval combat/other ships was a great idea the pdf unfortunately only tangentially develops, instead relying on several ok, minor options that mostly work, but left me unimpressed.

In the end, my final verdict can clock in no higher than 2.5 stars, rounded down to 2 for the purpose of this platform.

Advanced Options: Fight Like A Pirate is available from: