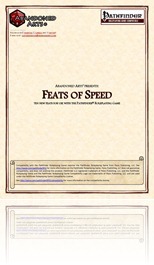 All right, you know the drill – 3 pages of content, 1 page front cover, 1 page SRD, 1 page of content, this time Abandoned Arts are providing us with 10 feats of speed, so let’s take a look!

Editing and formatting are good, though not perfect – I noticed a couple of minor glitches like misplaced blank spaces that should not be present in such a short pdf. Layout adheres to Abandoned Art’s 2-column standard and the pdf has neither artworks, nor bookmarks, but needs none at this length. The Feats of Speed herein left me mostly unimpressed – either by being not as tightly worded as I would have liked them to be, by being not that exciting or prone to abuse and in need of clarification. Overall, this is one of the weakest offerings of feats released by Abandoned Arts so far and while there are some good ideas in here, I can’t really recommend this collection of feats. While not all of the feats in here are problematic, the ones that do work are not enough to cancel out the problems. Thus, I will settle for a final verdict of 2 stars.

Feats of Speed is available from: