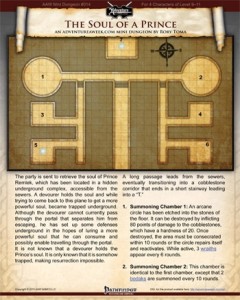 This pdf clocks in at 2 pages and is a mini-dungeon. This means we get 2 pages content, including a solid map (alas, sans player-friendly version) and all item/monster-stats hyperlinked to d20pfsrd.com’s shop and thus, absent from the pdf.

So, prince Remlek’s soul has been hijacked – the PCs are sent to retrieve it. It is in the claws of a devourer trapped in a complex under the city’s sewers and it can’t escape the complex. No one knows the soul is in the hands of a devourer, but the undead creature has established defenses to lure more powerful souls to activate the escape portal. Okay, if this sounds confused, then because the introduction is just that – how do the authorities know where the soul is, but not that it’s in the claws of a devourer? Secondly, how can the portal, which is NOT detailed, be only activated by essence? Awfully specific.

Things, alas, get worse – there is a chamber that sports a circle that continues to summon wraiths. Without consecrate, the circle can’t be destroyed. Spell not memorized? No divine caster with the spell? Tough luck – your module has just gone from hard to insane in difficulty – and that is provided your players guess that they are supposed to cast consecrate. Worse, this extends to BODAK summoning. While these guys are no longer as bad as in D&D 3.X, that’s insane. Also: No DC given to KNOW to consecrate the circle – PCs and players have to guess it. Alas, things get worse – there is, for example, an insanity aura (that can thankfully be deactivated) that requires a “DC 28 Will-save each round or lose 1 Wisdom.” Is that damage or drain? No idea. There also is a “puzzle” that boils down to “roll a skill-check,” with the ticking timer of the aforementioned constant summonings rendering the whole thing potentially super-lethal.

Editing and formatting are very good, I noticed no significant glitches. Layout adheres to a beautiful 2-column full-color standard and the pdf comes sans bookmarks, but needs none at this length. Cartography is full color and surprisingly good for such an inexpensive pdf, but there is no key-less version of the map to print out and hand to your players. The pdf sports a nice piece of full-color art.

I apologize to author Rory Toma, but I can’t sugar-coat it – this module is bad. The premise is jumbled and makes no sense, its prose looks confused at best, a state also reflected in the jumbled portal mess – how can the devourer establish those elaborate defenses when it’s trapped? The module feels utterly confused. The challenges are per se cool in their ideas and I *like* the timed summons – however, I do NOT like the fact that the players have to essentially GUESS how to handle these central challenges and are required to have one very specific resource – without that, they’re stuck in a lethal meat-grinder of unremitting assaults. Worse, with the means to handle said issues properly guessed, the aspect of time being crucial falls kind of flat, ruining the tension of the module.

The rules-language is flawed and this module lacks both internal consistency in its narrative AND its mechanics. Were it not for a glimmer of inspiration here and there, I would go further down – so far, this is by far the weakest mini-dungeon. My final verdict will clock in at 1.5 stars, barely rounded up to 2.