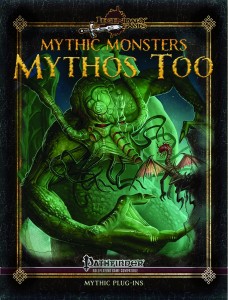 As always, we kick off this installment of the Mythic Monsters-series with a supplemental piece of content – this time with what can be considered a definition of creatures of the farthest realms beyond – if you’re smelling 3.X’s excellent Kaorti, wystes and similar creatures – well, the rules for alien cysts and the odd resin they use for weaponry confirms just that: We get rules for creatures distinctly from the material plane, but more alien than most outsiders can ever hope to become. The xenoid creature template (CR+0, +1 if the creature has 5+ HD) with its swift action true strike can definitely be considered a nice adaptation of the pseudonatural template. And yes, there is a mythic variant of the template provided, one that sports not only decay-inducing tentacles, but also a disturbing ability that may render helpless creatures into things from the realm beyond – a nod towards the concepts of degeneration and body horror.

But you’re not here for the supplemental material, so let’s take a look at those mythos creatures herein, all right? The CR 21/MR 9 Bhiole may not only cause earthquakes, they can coat just about everything in a devastating, entrapping slime with vast reach and significant area of effect. Being not particularly subtle, the quick awesome blow feat and sheer destructive power of them covers well the lethality one can and should expect from them. One of my favorite mythic creatures ever, the Color out of Space (check of Pelgrane Press’ “The Dying of St. Margaret” for a great purist module featuring them!) clocks in at CR 12/MR 5 – with its aura of listless ennui, the option to destroy by contact and flow through foes and concisely-presented feeding mechanics true to the lore, the build is a beauty that is only enhanced in its subtlety etc. by the inclusion of the color-blighted mythic simple template. At the same CR/MR, the star-spawn of Yog-Sothoth receives some rather cool time-based abilities, which, when executed properly, could even annihilate groups well above the CR/MR of the creature.

The CR 6/MR 2 elder things have an odd formatting glitch – none of the signature abilities are bolded, but that does not detract from e.g. force resistance or the ability to hurl bioenergetic concussive cysts. The synergy with mutation rules (featured in e.g. the Gothic Campaign Compendium) helps as well. At one CR and MR higher, the eye of the deep receives the option to execute swim-by-attacks and yes, conjure forth illusory images of strange civilizations long passed into well-deserved obscurity, images that may haunt your dreams… At the same CR/MR, Mi-Go become item creation tricks and particularly deadly claws – still, this one fell a bit on the weak side – but perhaps that’s just the fanboy in me being disappointed that their eerie “benevolence” has no additional mechanic representation or instant brain-in-a-jar-ification trick. While we’re at the mythos races – Yithians clock in at CR 11/MR 4 and gain not only defensive precognition, they also receive the signature amnesia and mind swapping capacities known from the lore. Snapping off limbs with pincers, suction and projection into the future render the yithians herein just as awesome as they ought to be.

If you’ve recently been spooked by some of the images circulating around the internet, you may wish to introduce flying polyps, which, at CR 17/MR 7 receive not only reflexive blasts of same that may send foes prone, their attacks may even daze or stagger and vast areas covering windstorms that may slow you, tornadoes and breath weapon like, devastating wind blasts make for a creature predisposed towards a horror/catastrophe combo – and a creature that can, in theory, hound adventurers for a whole module.

One creature I did not expect to find herein, but which fits definitely, would be the morlock – at CR 3/MR 1, they are a great example of good low-CR monster-design – with swarming, knockout blows and quick ways to drag targets off, they represent a superb rendition of the concepts – one of my favorites in this book, actually! Adding a charming effect to the Skum at the same CR/MR also makes for a very unique take on them that resonates well with mythos lore.

The CR 5/MR 2 nightgaunt gets a nausea-inducing tickle and can shred armors – but is apart from those not as interesting as most creatures in this book.

But what about the star-spawn of cthulhu, you ask? At CR 25/MR 10, these guys can become essentially immortal, with an ability quoting the famous lines “even death may die.” Know all those abilities that prevent getting an AoO? Well, these guys ignore them. Mind-blasts, massive attribute drain, tsunamis or terrible mind contact – these guys are deadly; more so than the bestiary 4 rendition, which disappointed me. That being said, I’m still not sold on this one either – the star spawn is lethal, yes, but I still feel like it could have used some more cataclysmic AoE potential -and their natural attack damage output is pretty pitiful for such a high CR creature. Mind you, that is me being a hard-to-please fanboy – 2d6+18 per claw, 1d8+9 per one of the 6 tentacles may be enough for you…

Now the new creature herein finally brings the flavor of Shub-Niggurath to PFRPG, in the guise of the Blackgate Behemoth – dark young of shubby that may create the labyrinthine black gates, disgorge gibbering mouthers, hibernate and disrupt the very connection to the realms divine – with the complex tricks available via the tightly depicted gate and the other, unique options at the command of this CR 16/MR 6 beast, we have, yes again, we also have some subdued charming effects, as befitting of ole’ shubby. As has become the tradition for the new creature, not only is the artwork great, it is also one of the best beasts in the whole book.

Editing and formatting are good, I noticed no significant glitches apart from some minor formatting hiccups here and there. Layout adheres to Legendary Games’ nice two-column full color standard and the artworks by Michael Jaecks are beautiful. The pdf comes sans bookmarks, which constitutes a comfort detriment in my book.

Jason Nelson, Tom Phillips and Alistair Rigg deliver in this installment of the series – this one is definitely superior to the first smattering of mythos creature, providing the less than subtle, cataclysmic threats. Now I am a fanboy of the mythos. Heck, one of my MA topics back in the day dealt with the ideology, philosophy and myth-crafting with regards to the mythos and its influence on media and popular culture. I own the glorious silent movies and independent movies à la the color. When I’m fed up with PFRPG-reviewing, I read CoC or ToC o come down for a change of perspective. I *love* the subject matter – and hence, I’m a difficult audience.

I am not a big fan of the “kill em”-mentality of PFRPG with regards to the mythos and I really appreciate and use SAN-systems. That being said, as far as combat and, infinitely more important, narrative potential is concerned, this one provides ample fuel – quite a few creatures herein have abilities that essentially beg to be used as fodder for adventures. In this capacity, the mythos creatures work as well in the system as one can conceivably hope them to. However, at the same time, some of the beings do not manage to reach this inspired level and when compared to one another, some clearly sport more inspired renditions – compare yithians and mi-go, the star-spawn of cthulhu and the blackgate behemeoth and you’ll know what I mean.

Still, in spite of my complaints – the fact remains: I’m a sucker for these creatures. I love their execution. And I will, in spite of the nitpicks and minor flaws, rate this 4.5 stars – and because I love e.g. the flying polyp to death, I’ll rate up and slap my seal of approval on it. Iä!

You can get these madness-inducing monstrosities here on OBS and here on d20pfsrd.com’s shop!