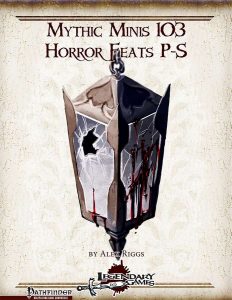 -Protector of the People: Add the mythic simple template to the golem protector and ties it closely to the mission of protecting the people. Upon completion, the cost reduction benefit applies to any construct crafted and you gain a tier-based bonus. Nice boost!

-Purging Emesis: Purge of poisons as a standard actions and affect all types of poisons. Also reduces the negative condition incurred by saving down to sickened. Also nets the feat a cooldown, including the requirement for food, via mythic power. Finally, the full-round action use can let you create a cone of slippery area. While the base feat does not note the effects of standard slippery terrain, it would have been nice to see them, but that is just me being ultra-picky and will not influence the verdict.

-Putrid Summons: Increases stench-DC of the called creatures and the power of the effect. For mythic power, you ay use the spell’s normal list of creatures.

-Sacrificial Adept: Also add +1 DC, +2 Cl or a metamagic feat with a level-increase of 1 or less to the spell. Via mythic power expenditure, you can add all 3 options at once. Also increases daily uses to the highest of mental attribute modifiers. Really cool! Two thumbs up!

-Sacrificial Ritual: Bonus increases by ½ tier and for every 3 tiers, chose a trained skill of the creature, granting yourself and all secondary casters an additional +3 to complete it. When sacrificing a lot of creatures and using mythic power, you and all ritual casters can ignore backlash, explaining why evil cults go overboard. Two thumbs up!

-Shatter Control: Eliminates range caveat for shattering control over undead and increases save DC…and the control loss is permanent. Use mythic power to make the ability work with any attack, not just full-round attacks. Also manages to get the complex behavior repercussions for undead right. Kudos!

-Skin Suit: Only slashing, piercing, fire or acid damage potentially wreck the suit and destruction of the suit makes you only take ½ damage. Also: Skin Suit doesn’t dissolve on sundown. Using mythic power nets a new skin suit and, as a swift action when expending mythic power, you can deliver energy drain or ability damage with undead special attacks without destroying the skin. Neat!

Editing and formatting are top-notch, I noticed no glitches. Layout adheres to Legendary Games’ two column full-color standard and it features the artwork on the cover; that’s it – the one page content is solely devoted to crunch. The pdf has no bookmarks, but needs none at this length.

Alex Riggs is back up to his game here – I noticed no hiccups, have no balance-concerns and the execution is precise, often rather creative. My final verdict will be 5 stars!