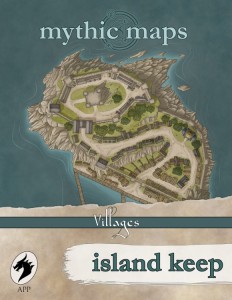 This Map-pack comes in a zip-file that sports two folders: One containing high-res jpegs, one that sports pdfs.

Let’s start with the jpegs – these come with full-color and b/w-versions as well as a rendition of the cover – both come in two versions: One sports labels that denote which buildings are which, whereas the others come without them for maximum immersion. (Nice if you’re like me and HATE handing out maps with numbers detailing the hotspots…

First of all, this keep/village provides multiple levels of fortification – all but the southern shore of the island sports massive, rugged cliffs that jut from the ocean. The southern shore also sports a significant array of wharves, with a slum/shanty-town-like section below the lowest wall. After the harbor’s wall, one can find a basilica and a steep stairway that leads towards a beacon, which uncannily lies at the south-eastern rise of the cliffs. At the northwestern part of the island, one can see a second, higher and elevated rise, behind a second wall, one can perceive a massive keep that looms over an island that conspicuously looks like an inverse eagle’s or dragon’s head…

The pdfs clock in at 23 pages each – 1 page front cover, 1 page editorial, 1 page advertisement, leaving a total of 20 pages for the maps. The pdf first provides aforementioned maps that also are included as high-res jpegs – so if you require an overview of the keep, these would be what you want. Thereafter, we get 4 blown-up versions of the map – each iteration is provided in a version, wherein the map spreads across a total of 4 pages, thus allowing you to print out a big map. If you’re like me a European, you will be very much in luck, for one pdf provides the maps in letterpack format, whereas the second delivers the maps optimized for the A4-format.

Tad Davis delivers a glorious, fortified locale here, one that, by virtue of its very make-up, inspires the imagination. Infiltrating this place should be challenging, as should be escaping from this place. As an adventuring locale, this is one neat place that showcases a talent for great cartography and for locales that inspire – that being said, there is quite a bit of water here and, when compared to the rest of the map, the lack of waves and relatively bland uni-color water looks less alive, less evocative than the rest of the map, so this is definitely a component wherein the pdf can be improved. I also would have loved a version of the map even further blown up and studded with a grid for miniature uses, but I guess we can’t have everything. Still, this is one fine map and well worth a final verdict of 5 stars.

You can get this beautiful map here on OBS!