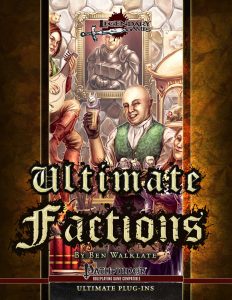 This supplement clocks in at 28 pages, 1 page front cover, 1 page inside of front cover, 1 page editorial, 1 page SRD, 2 pages of introduction/how to use, 1 page ToC, 1 page advertisement, 1 page back cover, leaving us with 19 pages of content. It should be noted, though, that much like in every LG-book, these pages are chock-full with text and information – we get a ton of content in these pages.

So, what did I complain about regarding kingdom building? What did people really want to see there? What’s a big weakness of the base kingdom building system, even after LG’s massive and glorious expansions like Ultimate Rulership? Well, it represents kingdoms as cohesive entities, when both in fiction and reality, they never behaved as such. The vizier wants to be caliph instead of the caliph, religious cults and mage guild vie for control, and the noble families are plotting.

Now, I am perfectly capable of plotting complex machinations of a ton of factions in the background of the campaign, seeing the information in tiny nuggets. My players like piecing together complex happenings – but what happens when a large group of NPCs in a kingdom-building game exerts its influence, either under the control of PCs or in opposition to them? In the more abstract kingdom-building, seeding hooks and the like becomes tougher. Enter this supplement.

As an aside, this also acts as a bridge of sorts between regular and kingdom-building gameplay: The PCs could e.g. begin using the rules for large organizations in kingdom building as well as Ultimate Intrigue’s organization influence rules to influence organizations, via them kingdoms…and perhaps actually become caliphs instead of the caliph. (Kudos if you got that reference, btw.) This allows for a more organic playstyle – from rags to leaders, to kings, this book allows for a linear progression and acts as a synthesis between Ultimate Intrigue and Campaign.

Okay, so how do factions behave? First thing you’ll notice is that factions actually get tangible benefits from their alignment: Lawful factions get +2 resources, chaotic ones +2 power, good ones get +2 reputation and evil factions +2 to power. Neutral factions get +1 to reputation and power, while true neutral factions get this bonus, obviously, twice. If the combined size of a kingdom’s factions exceeds 10 times the kingdom’s size, it’ll get +1 unrest during upkeep’s Step 4. Goals designate the faction’s endgame; operation denotes the means by which the organization seeks to achieve its goal.

Power, Reputation and Resources are pretty self-explanatory and constitute the attributes of the organization. A point of size roughly represents 25 members, and in a cool twist, we get Ultimate Rulership-synergy here. If the members are dissatisfied with the faction’s leadership, then this leads to tension, which translates to a scaling penalty to faction checks. Factions may have types and measure their wealth in Wealth Points (WP), each of which is worth approximately 400 gp, or 1 BP in kingdom building. WP may be purchased during the income phase.

In order to create a faction, you first calculate its size. They begin with a size of 0, and buildings in the kingdom increase the maximum initial size. A MASSIVE table of a detailed building-list provides an easy 1-page-stop-reference for the sizes, and, once more also covers Ultimate Rulership’s buildings. Factions may start as a smaller size than maximum, should they choose to do so. This table also the 9 types of factions – for example, an academic faction obviously benefits from an academy, while a military or religious one does not. These 9 types, just fyi, each convey a total of +2 to the faction’s attributes, though obviously, some of them split the +2 bonus between two attributes.

As an aside: The engine allows, as presented here, for pretty easy changes of faction type: Wanted to subvert those religious fanatics via wit? Change the type of the faction. Looking for a representation of growing fanaticism and radical thinkers, or an increasing enlightenment? Type-changes can provide an easy means to write a new chapter of your faction’s history. After the type, you determine the secrecy of the faction –a faction may be open, covert or disguised. After codifying different basic types of possible goals, we take a look at the scale of the goal, which obviously may range from local to encompassing the whole kingdom. Note that public and covert goals may be different from another! Goals have a basic DC 15 to achieve, with aims, scale and privacy determining the DC-modifier to achieve a goal.

So that’s the base engine for the faction. From here, we proceed to take a look at the faction turn. A faction turn takes place during the kingdom turn sequence, after the Edict phase. Results of the faction turn should take place before the start of the Income phase. All factions perform each faction phase before moving on to the next phase. Power acts as an initiative of sorts for factions, and on a tie, the smaller faction goes first.

First, we have the upkeep phase – here, we check tension. If tensions become particularly bad, we may well see a splintering of factions here! After that, we pay upkeep costs.

After that, we move on to the operations phase: Here, factions may act, with their sizes governing how many operations can be initiated. Operations happen in a contiguous sequence, not parallel: First OP #1, then OP #2, etc. The sequence may be freely chosen. Here, gp can be converted to WP and income is determined. Operations are classified in two categories – active and maintenance. These include advancing a goal, abandoning one, aiding factions, earning wealth, pursuing alliances, engaging in faction conflict, recruitment…you get the idea. These interact in meaningful ways with the kingdom building rules.

Now, I mentioned splintering factions before, and this indeed is a part where the intrigue component comes into play – you see, the pdf provides the tool to treat factions as organizations and vice versa, allowing you to switch between them with relative ease. This makes it very much possible for individual characters to matter and provides an uninterrupted line of player agenda from the personal to the kingdom level, which, to me, represents a HUGE selling point. This is also relevant, obviously, for the easy to grasp splintering rules. If you already have a kingdom in play, fret not – the book contains rules for creating actions for existing kingdoms.

Now, if we assume factions and PCs as a constant line of sorts, it should become obvious that PCs will sooner or later want to use skills in the context of factions, right? Well, the pdf provides concise rules there as well.

Does that all sound too complex for you? Fret not! Simple faction rules included. Now, the pdf is not content in just providing an unbroken line from intrigue to Campaign – it actually ALSO provides the means to use the downtime rules in context with factions! Yes, this is purely optional, but oh boy did I smile here. Of course, kingdoms may attempt to support or suppress a faction and, as noted, the faction/intrigue rules, are presented in a concise manner: The process covers approximately a page and is tight and was understandable on my first read-through. Considering the systems in question, that is quite an achievement.

Now, the book is content with just providing you with tools – it proceeds to elaborate on why factions matter and how you can use them in play – and, if you’re a lazy fellow like yours truly, you’ll certainly appreciate the 6 generic sample factions that allow you to throw factions into play without much hassle. The pdf concludes with a handy table-index.

Editing and formatting re top-notch, I noticed no glitches on a forma or rules-language level. Layout adheres to legendary Games’ nice two-column full-color standard. The artworks are in full-color and nice, though fans of Legendary Games will be familiar with all but one of them. The pdf comes fully bookmarked for your convenience.

WTF has just happened here? This is, to my knowledge, Ben Walklate’s FIRST RPG-supplement. As in: Freshman offering. At least I couldn’t find any previous rulebook. This pdf has no business being so darn impressive! I expected that this book would be good; after all, Legendary Games would not jeopardize the reputation of their phenomenal kingdom-building supplements.

Still, I did not expect this little book to actually succeed in such an impressive manner in a task that can well be deemed a squaring of the circle of sorts: We have a seamless progression from character to faction/organization to kingdom-building level, providing not only perfect synergy between Ultimate Intrigue and Campaign, but also with the must-own Ultimate Rulership. This is baffling. I mean it. The systems presented are organic, precise and, best of all, remain easy and painless to sue and integrate. Indeed, the rules presented herein sport an almost effortless elegance that, from a design-perspective, is a true achievement.

This book is a missing link of sorts; whether you take the analogue of Conan (Solitary PC -> faction -> king) or just kingdom-spanning intrigues that oscillate between the different levels, this book delivers; with transparency and much-needed interactions between the different levels, this represents an absolute masterpiece that allows you to tell a whole cosmos of new stories. There are very few book that attain this level of game-enhancing characteristics, much less in such a tight manner. Ultimate factions is a masterstroke and the single most impressive freshman offering I have read in a long, long while. My final verdict will clock in at 5 stars + seal of approval, and this qualifies as a candidate for my Top Ten of 2017. This is a must-have offering and should be considered to be an EZG-Essential for any games that want to blend intrigue and kingdom-building. This is a true masterpiece. Get it.

You can get this elegant masterpiece here on OBS!