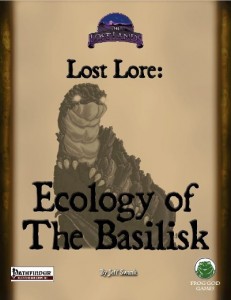 This installment of the Lost Lore-series clocks in on 9 pages, 1 page front cover, 1 page editorial, 1 page SRD, 3/4 of a page blank, leaving us with 5 1/4 pages of content, so let’s take a look!

Okay, so the first thing I actually noticed (and enjoyed) about this pdf is that it’s actually written in character – so yes, the reader is basically diving into the field notes of Lady Daxitroniusilluminarious Jaedall – and know what? I really like the style in which this is presented: Beginning with a brief anecdote, we go on to properly classify the creature within the context of its history and physiological contexts – and yes, the tales do include e.g. the effects of reflective substances and basically applies the scientific method to the study of fantastic creatures – several spells and their roles and interactions during the study of this creature are properly covered, conveying a sense of authenticity to the subject matter I found myself enjoying – this *does* feel like a scientist properly studying the basilisk.

Similarly, the pdf goes on to explain psychology and societal norms of the basilisk and the respective life cycle, while also providing tips for facing these creatures and a brief list of useful spells. The pdf also contains two spells – one that provides limited protection versus gaze attacks (appropriate at 3rd spell level) and another that lets you telepathically communicate with petrified creatures. The pdf also covers a brief list of useful items to wear when facing off versus these lethal creatures as well as two new magic items.

The first of these items would be a mask that provides immunity versus gaze attacks, while the second is a robe that has a 50% chance of reflecting rays back…and unfortunately, the item is rather opaque: “The wearer is not protected from gaze attacks, but can instead reflect any gaze back upon the original attacker.” Okay, HOW? I have no idea. Is this supposed to be automatic? I.e. wearer takes effect, attacker takes effect as well? Only on a failed save or also when making the save? What if the wearer can’t see the attacker, but the attacker can see the wearer? Similarly, the reflecting back of rays is odd – it requires a ranged touch attack by the wearer, but I’m not clear whether this requires an action or not – spell turning, for example, does not require an attack, but is more limited. This item…does not work as written.

The pdf also offers a CR 7/MR 3 version of the mythic basilisk that gets a nasty petrification aura – nice. The pdf also provides an 8-level “Bestiary Class” for the basilisk – basically a means to play a basilisk. The class nets d10, 2+Int skills, proficiency with natural weapons, base movement rate 20 ft. and begins play as a small creature, growing to medium-size at 3rd level. To progress in this racial class, a basilisk needs to consume a limited amount of GP per level. The class provides multiple attribute gains and unlocks the petrifying gaze (with a daily limit, increasing uses and range) at 4th level. BAB-progression is full and the class gets good Fort- and Ref-save progression as well as significant bonuses versus trip and bull rush attempts. This is an okay monster class and using basilisk blood to revert petrification represents a nice balancing mechanism once the gaze gets into player-hands.

Editing and formatting generally are very good on a formal level, though I do not understand why the petrification aura of the mythic basilisk, as one example, is bolded. Apart from the one item, the rules-language is precise. Layout adheres to Frog God Games’ two-column full-color standard and the pdf has a nice piece of b/w-artwork. While a pdf of this length doesn’t require them, the absence of bookmarks could potentially annoy you, though I won’t penalize a brief pdf like this for their absence.

Jeff Swank’s ecology of the basilisk has me torn – on the one hand, I really enjoyed the prose of this supplement – the presentation of the basilisk as contained herein is more than rock-solid and evocative. The advice and inclusion of a mythic version was also nice. Still, at the same time, I couldn’t help but feel that the pdf is a bit too short for its own good – what’s here is pretty nice, but the pdf feels very constrained in what it offers – the basilisk-class, for example, while pretty well-balanced, feels a bit more tedious than it could be: I *get* the linear gaze progression, but why doesn’t the player get any say when to get the attribute bonuses? As presented, it’s 8 levels sans any player agenda, sans any choice. Boring. Secondly, the class requires you to look up basilisk natural attacks, since it does not provide the information for it…which kinda sucks. It’s no deal-breaker, but neither is it comfortable. Thirdly, I was really missing an age, height and weight-table, particularly considering the size-increase: If you do play a basilisk…can he cross that rickety bridge sans it collapsing? Tables would have really helped there.

That being said, this is not a bad supplement and certainly, the well-written prose helps elevate this pdf to being a solid read. My final verdict will hence clock in at 3.5 stars, rounded up to 4 since this is the first such ecology-style book in the Lost Lore-series.

You can get this ecology here on OBS and here on d20pfsrd.com’s shop!