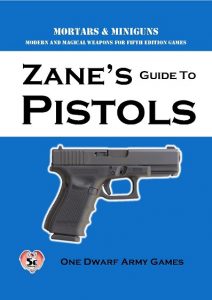 Additionally, every weapon has an ammo score, which denotes the number of pieces of ammo it can hold before requiring reloading, which consumes an action. Guns can prematurely be reloaded. The pricing for the ammo is pretty pricey, btw. – the least expensive bullets, for .38-guns, costs 30 gp per 50 bullets, which renders this ammunition significantly more expensive than e.g. crossbow bolts or arrows (1 gp net you 20 of those, in case you need a direct comparison). The revised edition now clearly states that gun ammo cannot be retrieved – good!

After this, the pdf goes on to depict “the exotic stuff” – i.e. a collection of diverse magic guns – interestingly, not just sporting a general scarcity, but also providing a more fine-grained value, which is a nice touch for control-freak bastard GMs like me. Now the respective items run quite a broad gamut: There would be an autoloader that allows you to mark a foe as a bonus action, gaining +2 to attack and damage rolls versus said foe, whereas a mini-shotty deals +1d4 damage on a damage die roll of 4 – and now, the previously ambiguous wording has been cleaned up. Better sniping can be achieved via the aptly-named Bullseye. The one-shot express cannibal-gun can be enhanced by sacrificing life to it, while another gun fires corrosive bullets that have a chance of ruining a target’s armor…which is pretty interesting, particularly considering that the pdf manages to take natural armor healing into account and now also includes a note on interaction with magic – once again, great work cleaning that one up and yes, this *does* include notes on interaction with resistance/immunity!

Increased ammo-expenditure for increased damage can be found as well. A very powerful weapon, Deadly Scanner, is pretty nasty – it’s threat range for critical hits increases by +1 for each subsequent shot fired at a target, whether it hits or misses…and the gun deals bonus damage on crits. Lightning-laced six-shooters that can stun the target – resistance and immunity do feature herein and the effect now is properly balanced!

One of the most visually stunning guns now also works perfectly – a magnum that deals bonus lightning damage and has a chance to spawn single-target arcs of electricity – the Electrifying Cueball. And no, I can’t misread that one any more- it’s proper and precise. Kudos!

The fire gun now allows for a save to avoid being ignited by the shot and the cold gun can paralyze you, all while taking defenses into account. Pretty cool: There is a MIB-style thunder-damage causing legendary autoloader that has enormous recoil, while the Lucky Punk is an obvious nod to Dirty Harry – any roll of 5+ does not consume any ammo…which is pretty powerful, considering the high costs of ammo. A nod to Judge Dredd can also gbe found within these pages alongside charge-based, life-leeching gun…there are quite some solid ideas here. The bolter than can inject microexplosives into targets now also features a properly cleaned up entry and can now stand as an epitome of the most awesome guns in this book.

The pdf also sports two new feats, Guns Akimbo and Pistol Expert. While nice, the former does not account for potential heavy firearms a GM may devise, which is a bit of a pity. Pistol Expert allows, among other things to reduce recoil and reroll 1s of damage dice AND increases the reload action economy penalty, which may be a bit much for one feat. The pdf also allows for a double tap fighting style and provides the gunslinger martial archetype for the fighter, which generally can be considered a cool take on the tropes – at 15th level, you can e.g. do the Lucky Luke and take reactions to ranged attacks before the triggering ranged attack is resolved. The interesting thing of this one, mainly, is that it allows for extra control regarding attacks via luck and a bit of ability control, providing some serious bonus attack combo potential – whether you like or dislike that ultimately is up to taste.

The editing and formatting of the revised edition are cleaned up and significantly smoother on a rules-language level. Layout adheres to a printer-friendly two-column full-color standard and the pdf has no artworks apart from the cover, but comes fully bookmarked for your convenience. As a minor nitpick, one page is almost empty – that does not feature in the final verdict, but in case you’re particular about that kind of stuff

Georgios Chatzipetros of One Dwarf Army’s freshman offering is much tighter than I honestly expected it to be: The basic firearm rules follow the time-honored tradition of power at a price, with ample subsets of rules to make them feel different from crossbows etc. I like the frame and the pricing is also pretty tight, with none of the clutter/issues that other systems have. The focus lies very much on MOAR damage – to the point where you can outclass all other weapon types easily. This may be an issue in mixed settings, so beware of that – a focus on more utility, less damage escalation via exploding dice-like mechanics may be prudent. And mind you, I *like* exploding dice. I’ll never forget a PC of mine blowing a BBEG’s head clean off with 5 consecutive maximum d10s on a musket in a previous edition, thus saving the whole group from a TPK…but in view of the small die-sizes employed, you’ll statistically get quite a bunch of rerolls/bonus damage. How and whether that still works in the context of later installments, where auto- and burst fire are more common…we’ll see.

More important than that, though, would be the simple fact that the author took the time to clean up and vastly improve the weaknesses in the previous iteration of this pdf, replacing minor glitches with pure awesomeness and, in many cases, juggling relatively complex concepts. The revised version has thus earned a rating-upgrade – this is now a 5 star-purchase, well worth the more than fair asking price!