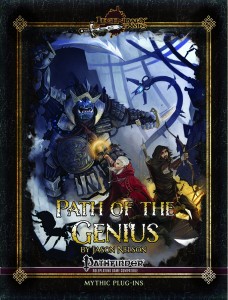 Much like the previous installment in the series detailing the path of the stranger, we have a mythic path here that is intended for PC-use, so let’s take a look at the genius. Framework-wise, we receive 3 Hp per tier and at 1st tier, we get a so-called genius idea, which is selected from 3 options: Brilliant Distraction allows you to expend mythic power to execute a melee or ranged attack as a swift action against a target within 30 ft, using Int in lieu of Str or Dex for purposes of atk and damage. If your attack hits, adjacent allies may execute a n AoO versus the target with your Int-mod as bonus. Also as a swift action, deadly throw allows you to use mythic power to draw and throw a weapon or bomb, rolling twice, taking the better result and adding tier to damage. Finally, immediate action rerolls allow allies (and only allies!) to reroll failed saves, using your Int as governing attribute for the save’s base instead of Con, Dex or Wis.

Each level nets a path ability, with 1st tier abilities, but there is one more peculiarity of this path – a number of abilities herein require tinker supplies, which cost 1d6 gp times the HD the ability is used on, doubling cost for 3rd tier abilities, multiplying cost by 5 for 6th tier abilities. These costs may be halved via the expenditure of mythic power and a lab or town is sufficient to refresh the supplies, with weight being akin to gold, which is, btw., defined as 50 gp = 1 lbs. in a rule most players are unaware of – so kudos for including the info!

The path abilities themselves are quite diverse – while using Int instead of Cha for purposes of Bluff or Intimidate may sound boring, adding the fascinated condition to demoralize’s array is interesting, especially since you can actually make the target subsequently reveal information via Bluff. of course, gaining the other genius ideas can also be accomplished via path abilities, akin to how the stranger handled that. Eliminating AoOs from imbibing (or drinking them faster via mythic power) and skill rerolls powered by mythic power work pretty well, though I’m not a big fan of analytical eye’s metagaming returning once again. Providing numerical escalation for investigators inspiration class features and talents and better crafting would fall into the range of the expected. The Bulletproof power that not only improves your AC versus bullets, arrows etc., it also potentially negates their devastating criticals.

I am also partial to a particularly cool idea – when you have access to a library, lab or the like, you can spend time there to gain a kind of virtual mythic surge specifically intended (and buffed) to solve Knowledge, Craft or Profession-checks – but beyond that, the ability also allows you to deduce whether the proposed solution to a puzzle or riddle would work, helping immensely. What about nonlethal electro shocks that may remove detrimental conditions from the targets? Adding numerical escalation and increased splash radius will find some adherents among alchemists, while mundane healing that duplicates cure light wounds and its follow-ups can be scavenged with its table for no/rare magic campaigns – just replace mythic power costs with another limited resource and there we go! Nice, especially since the follow-up ability at 3rd tier increases the usefulness further! Providing divination-like glimpses of the future or at-will hypnotism are also covered. Brads will certainly enjoy the fact that bardic performance-related feats and class abilities can be applied to bardic performances and rangers/rogues et al. will enjoy a similar upgrade for trapfinding traps and ranger traps. Particularly useful should be the option to dabble in other paths akin to the trickster.

Pretty nice – as a shout-out to NeoExodus’ popular machinesmith-class, mythic discoveries covers the tricks of this class alongside alchemist and wizard discoveries. Limited application of both Int and Wis to ability or skill checks or will-saves may not be my favorite application, but at least, the ability has a limit that prevents a constant numerical escalation. Using alchemy in lieu of Heal and making alchemical remedies should also be explicitly mentioned – including options to improve conjuration (healing) spells or extracts via mythic power, rendering them mythic, though here, the wording could have been a tiny bit smoother.

Upgrading implants that grant message, sending and later telepathic bond, with more mythic power allowing for even better links and an upgrading spy drone acts a similar duplicate of spells, with the obvious difference of being themed around concepts à la prying eyes, later even allowing you to cast spells through it. Negating misfires and support for the rules of the Technology Guide is also nice to see. Fans of the stranger may also recognize the exotic weapon-adaption ability I particularly liked there.

The 3rd tier abilities include making primitive firearms behave as advanced firearms, including additional options to enhance them via mythic power, making clockwork constructs and animating objects (again, with a scaling) and sabotage of equipment at a mere touch – all pretty cool. What about making dominate drones via implants? Yeah, cool! PCs annoyed by villains having cool escape plans (which are glorious) may enjoy receiving access to this ability as well, while fleshwarping potions cater to the mad scientist-fan-crowd.

I also enjoy “One Step Ahead”, which allows you to spend mythic power to execute abilities which can counter that of your adversaries as an immediate action, allowing you to smirk and counter all those nice combos your enemies have planned for you.

6th tier provides the ability to temporarily clone non-limited class abilities of your allies and expanding the durations of elixirs et al. to a day is pretty massive. Want to go Frankenstein? Well, there would be an option for that via specialization of making Mythic Constructs. What about infecting foes with a nanite virus that kills them and turns them into zombies under your command? Yes, that one is awesome, though I personally would have preferred a unique template for nanite zombies (who become constructs and are treated as either regular or fast zombies). Fans of the technology guide will definitely like the ability that lets you convert magic items into technological items. As a capstone 10th tier ability, the genius may roll twice on all Int and Wis-based checks, skill-checks and initiative, taking the better result. For one mythic power, you are treated as having rolled a 20 and any surge-dice used are automatically maximized and sufficient knowledge versus creatures allows you a free cunning bane ability to add to ALL attacks you execute, while also increasing any DCs.

Editing and formatting are almost perfect, I noticed no glitches apart from a box where a minus should be – cosmetic, really. Layout adheres to Legendary Games’ beautiful 2-column full-color standard and the pdf comes with copious amounts of full-color artwork, including some gorgeous 1-page pictures, though you may know some from previous LG-supplements. The pdf comes fully bookmarked for your convenience.

Jason Nelson’s Genius is a fun mythic path that provides an interesting array of options and cutting-edge awareness of other rules and subsystems, which is indeed nice to see. The path itself is well-crafted and versatile, though I wasn’t blown away by the resurgence of the metagamey analytical eye-based abilities. Still don’t like those. This path also has some overlap with the stranger and while that is only fitting, I caught myself being slightly less blown away here – the design here feels a bit more conventional, with slightly more escalation abilities – that, though, remains me being a nagging, spoiled reviewer. Ultimately, this is a cool path and fun, though one that remains slightly less (subjectively, and for me) awesome than its stranger-brethren. My final verdict will hence clock in at 5 stars, just short of my seal.

Now let the discussion begin – is Batman a Genius or a Stranger? 😉

You can get this fun mythic path here on OBS and here on d20pfsrd.com’s shop!