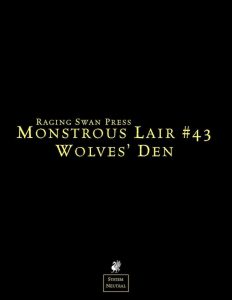 Okay, so this one should be interesting, in that we kinda know wolves from our real world – as such, the dressing table for outside the lair focuses very much on classics that remain plausible: Amonia and musk smell, dead prey, paw prints…but there also are some subdued and fantastic notions, such as a glade containing statues of sleeping wolves. As for what’s going on, we have solitary wolves digging burrows, a pack dragging a bear carcass around, older wolves flanked by pups beneath a monument, wolves fighting each other, etc. I liked the massive wolf atop a stone throne, but as a whole, I wasn’t too blown away here – I think some additional contrasting of the mundane, yet mystically-charged wolf with the very real magic of the fantasy game would have been nice to see here.

As for major lair features, we have entrances carved like massive maws by primitive tribes, a cacophony of sound inside that makes pinpointing targets hard, effigies of demonic statues, rough cave drawings, etc. – these do actually provide a blending of the mundane and fantastic in a meaningful manner. Minor lair features include tattered bone chime remnants, broken-off statue heads, etc.: Here, it becomes apparent that it’s hard to make the lair stand out from that of other creatures, and at this point, we’re at the fourth entry that features some sort of statue. It’s not a bad table, but it’s not as unique as the ones the author usually delivers.

As far as wolf appearances are provided, we have stripes on scarred worg skin, albinos, massive pack leaders, erstwhile pets, etc. If you expect fighting harnesses or similar equipment, mutations or the like, I’ll have to disappoint you, though. Treasures include wolf fang-studded chains, remnants of previous explorers and a plethora of wolf-themed items, which is a smart way to go about this. The table covering trash includes a variety of items of things ruined by wolves, including a red hooded cloak (nice!). An arrow protruding from a tree stump, though? Hmmm, not that interesting; at least have a tuft of fur and flesh there.

Steve Hood had a hard task with dressing for wolves, and while the supplement is better than it could have been, it is not as creative or diverse in the entries as his usual offerings. Particularly contrasted with some of his peak-awesomeness takes on Monstrous Lairs, or e.g. the similarly hard to write wyvern dressing, the wolves-file doesn’t successfully capitalize on the mythological aspect or the interaction of the fantastic and mundane. It doesn’t do a bad job, mind you, but in contrast, feels like “only” a good little dressing file. As such, my final verdict will clock in at 3.5 stars, rounded up due to the low price point.