Sometimes, being a reviewer is awesome: I got the epic, full-blown Gossamer World Nexopolis prior to its release and had time to digest it – so before the product even goes live, here’s the review! EDIT: Now with cover and links! 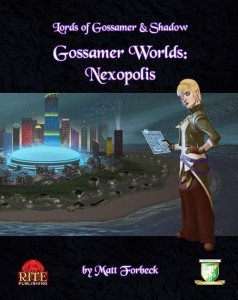 This installment of the Gossamer Worlds-series depicting infinite worlds along teh Grand Stair clocks in at 51 pages, 1 page front cover, 1 page editorial, 1 page back cover, leaving us with 48 pages of content, so let’s…

…wait. What? Yes, this is a break of form for the series: Where usually, Matt Banach provides, short, extremely affordable primers for worlds that can be essentially considered campaign seeds, this one is penned by Matt Forbeck and is more of a full-blown sourcebook.

Now the book kicks in with a 2-page full color map of the island and city of Nexopolis and while not bad, it is one weak spot of the pdf – compared to the awesome, original pieces of full color atwork, the map didn’t wow me – it is functional, but nothing special. That being said, LoGaS stands and falls with its setting – and here, the foreword sets a theme – much in line with e.g. Catherynne M. Valente’s “Palimpsest” and similar weird cities that act as a kind of nexus, Nexopolis has a welcoming committee – one exemplified by the character (and player!) potentially reading this as an introduction to the setting at hand.

The city of Nexopolis and its island is ultimately one island that is the last inhabitable place in a world ravaged by the war with the dwimmerlaik – here, survivors of once the more door-rich worlds on the Grand Stair still dwell and here, countless doors still exist. Though legendary Finnian has some control here, via specially created keys. So Finnian’s the leader and lord? Well, yes and no. Finnian is the none-too-subtle power behind the leaders, the constant power behind the throne, so to speak – Finnian’s not about politics, but rather governing: Managing and ensuring survival. And in a world ravaged by war, where poisonous storms may howl with the ghosts of the dwimmerlaik slain in the war, where people from countless worlds come for trade (or vacation – the weather’s nice!) and where both magic and high technology reign supreme, that’s something.

Indeed, Nexopolis can be considered the ultimate melting pot – in the tradition of planar metrolpolises like Sigil, next to everything you can imagine can be found here – hence, the local populace tends to exhibit a jaded, somewhat condescending stance toward less cosmopolitan dwellers of other Gossamer Worlds. Also in tradition of similar hub cities, law and its enforcement is less conventional; to prevent constant ideological issues and gripes, law is more about keeping the peace here and different zones (i.e. neighborhoods) with their own styles, rules and things to do are provided. And surprisingly, the respective neighborhoods actually transcend the standard depictions one would expect from e.g. the slum-like area.

Rather interesting would be, that often ignored issues like e.g. the transport of military and WMDs are covered as well, including the outside of the inhospitable world, ravaged by the wars long past. Glorious! The book also features quite an array of different NPCs – from the Lord Finnian to the in-character author of the pdf to Marhseeba, Finnian’s scientist-come-trade-advisor to the leader of the Vigilance Council, the leader of the Official Business Development, the justicar, the mysterious potentially reverse aging Mother Girl sorceress -all these characters come with full-blown stats – and fluff-only write-ups of even more intriguing characters provide quite an array of hooks. Beyond that, even the stance of well-known Gossamer Lords and Ladies regarding Nexopolis and its special position is discussed, adding further potential for story-weaving.

Now beyond this vast panorama of narrative options, we also are introduced to an array of no less than 8 cantrips, 6 spells and 4 artifacts. Not enough? What about rats that use coconuts like hermit crabs use shells? The fabled white squid?

Now beyond these, this supplement opens a whole new dimension of LoGaS-gaming – the primer for creating nonpowered characters! While the primer is short, the total usefulness of the short section rocks.

Finally, the pdf closes with a smattering of adventure hooks, just in case you’re not inspired enough yet – and if neither reading this book, nor the hooks helped, I really don’t know what will.

Editing and formatting are top-notch, I didn’t notice any significant glitches. Layout adheres to Rite Publishing’s 2-column full-color standard and the pdf comes with a neat plethora of awesome, original full color artworks. The pdf comes with extensive, nested bookmarks.

Matt Forebeck delivers what could essentially be summed up as a inter-planetary/planar Nexus meets tropical, post-apocalyptic casablanca meets high-intrigue capitalism and CEO-business-level intrigue. This supplement actually managed to carve out its own niche within the plethora of planar nexus-style cities I’ve read for various supplements and systems and that’s a feat in itself. The lively, cool characters add vast array of angles to pursue is staggering – even before adding other gossamer worlds. Add to that the more than required rules for non-powered characters and we have a supplement on our hands that should be considered a non-optional purchase for anyone invested in Lords of Gossamer and Shadows. My final verdict will clock in at 5 stars + seal of approval.

You can get this awesome supplement here on OBS!