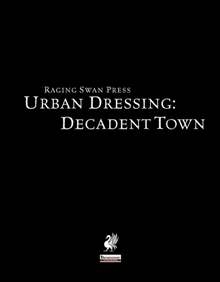 This pdf, like all of the new and improved Urban Dressings, begins with a massive table of 100 entries describing sights and sounds to be found within these towns – and here, I expected a problem. The very word decadence implies an oscillation between excessive pleasure-seeking and simply massive spending of a frivolous manner, while also carrying connotations of squalor and decreptitude lurking beneath a civilized veneer. Surprisingly, this table actually manages to convey this oscillation in its vastly diverse entries – from frivolous uses of money and power to examples of the utter vanity of the ruling classes, a certain sense of sinister dread manages to slowly seep from the entries of this UD’s columns – great job!

The 50 sample businesses provided in the second table further enhance this impression – from hairdressers to overpriced weapons to luxury coffin makers, this array of businesses aptly depicts the folly and eccentricities of people with frankly too much gold to spend – though I have to say that, personally, I would have enjoyed slightly more unsavory establishments beyond black market et al.

The third table herein, once again spanning 50 entries, covers, surprise, a lot of diverse aristocracy in short fluff-centric entries as well as the odd assassin with an underserved reputation and the people catering to the ruling classes’ tastes as well as the odd, mad beggar.

The final table provides a total of 20 hooks and complications – from being challenged to duels by foppish dandies, to witnessing the utter indifference to the plight of lower classes and the theft from those recently slain to being asked to pay the “tourist tax” by some not-so-friendly guards, each hook at least can be developed into an encounter or even full-blown adventure.

Well, as a goth, the one hymn that kept returning to my mind was “My kind of town” – Frank’s words seemed to resound with the very concept of this pdf and I enjoyed it. That being said, this may be just me, but this time around, it feels like Josh Vogt’s Decadent Town-dressing lacks a bit the sleazy aspect, the outrage corruption beneath the surface; the drug-dens and decadent past times. The lurking memento mori beneath the surface, the presence of death and a fin de siècle like sense of impending doom. The pdf partially manages to capture this very elusive mood, but in other instances, it felt more like a window into a foppish/snobbish town rather than a decadent one. Admittedly, the tone is exceedingly hard to hit, but I feel Josh Vogt manages to partially, but not wholly, accomplish it. Hence, for now, my final verdict will “only” clock in at 4.5 stars, rounded down to 4.

You can get this nice dressing-file here on OBS and here on d20pfsrd.com’s shop!