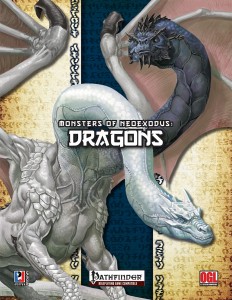 This monster book clocks in at 34 pages, 1 page front cover, 1 page editorial/SRD, 2 pages of advertisement, leaving us with a massive 30 pages of content, so let’s take a look!

Ah, dragons! Who doesn’t love them? They’re the apex-predators, the big, nasty super-killer creatures and there is no adversary as iconic out there. Suffice to say, I’ve read a lot of dragon-variants over the years and I very much loathed the “everything needs to be a half-dragon”-trend in the dying days of 3.X – the tendency cheapened dragons in my opinion and took away from their impact. I’ve also been pretty vocal about my preference for dragons to be smart adversaries that should be played and presented as such…but that’s just my take on the concept.

More important for the purpose of this review would be another component: Both in official bestiaries and in supplements pertaining dragons, I’ve noticed a tendency towards cop-outs or, if you like, less thorough presentation: Dragons, traditionally, sport a massive table that lets you customize them by age category; in the better installments, we also get sample builds for some different age categories. This, at least in my opinion, in important – it further emphasizes the iconic place these magnificent beasts have in our games and sets them apart – basically, a dragon is already a customizable threat, an entry already covers diverse variants for different CRs. Now this does take up space, sure -but know what? It’s a significant part of draconic identity as far as their status as monsters is concerned. This pdf begins by doing this honored tradition justice with the required tables and summary of dragon senses, no breath and similar fun abilities -yes, including starflight.

The respective entries for the dragons themselves sported in this book provide 3 different sample builds, for the young, adult and ancient age category, respectively and each dragon gets a thoroughly AWESOME, truly evocative mugshot – I’m not kidding when I’m saying that these are absolutely gorgeous. Obviously, the respective dragons also sport individual tables that denote ability-progressions over the respective age categories. The cool thing, at least in my book, is that this book does not simply add more chromatics or metallics to the fray – instead, we are introduced to two categories of the dragons with multiple subtypes. The first of these categories would by conflict dragons, and they are nasty. No, really.

Take the first kind and look at the name – In clear letters, one reads “Armageddon Dragon.” Yeah, these guys are not playing around – with a starvation aura that fatigues creatures, SPs that include cup of dust, waves of exhaustion and many more and a slashing/dehydration-based breath weapons, these creatures’ abilities make pretty clear that they are about the ruination of…everything. More unique still would be the fury dragon – while an acidic breath weapon may seem pretty conventional, these dread beings are plague carriers have an aura that increases the potency of diseases (and makes them more virulent) and they can incubate an insanity-causing berserker-disease. Oh, and they pretty much look like a horrid blending of insects and dragons, with a CR 6 parasite swarm being provided as well. Why? Because they can disgorge increasing amounts of these nasty, lamprey-like worms! Disgusting and glorious!

The holocaust dragon would be the necromancy-themed of these nasty dragons – with an aura that weakens the living and strengthens the undead, a negative energy-based breath weapon (that alas, does not heal undead) and a limited ability to throw disgorged souls at his foes (dealing negative levels AND reanimating present corpses…) as well as the soul devouring abilities of these beasts make clear that they are not to be trifled with. Now wrath dragons would be basically the big, nasty and rather unsubtle destroy-em-all type of grinders – beyond a berserker-rage-including aura and additional fire damage, they can breathe burning shrapnel (which doubles as caltrops), eat most metals easily (ignore 10 hardness) and combine bites with lower-strength breath weapons for truly apocalyptic damage. Oh, and what about a limited breath of molten metal or retributive damage versus weapons that strike these beasts? Yes, pretty awesome!

The second class of dragons introduced here are stellar dragons – where conflict dragons are predisposed to an unraveling, an end, stellar dragons strive to maintain balance and existence – though that does NOT mean they’re necessarily nice: Alignment-wise, they are LN or CG and take the VERY large picture into account – which means that yes, they may sacrifice a kingdom or even world to maintain balance and defeat a greater evil. Their abilities are no less unique, mind you: The first of these dragon types would be the gravity dragon: With a slowing presence, gravity-increasing breath and particularly brutal melee attacks, they are intriguing. As a minor complaint – their natural attacks increase as though they were one age category older, but no progression for dragons beyond great wyrm is given, which is a small oversight. One easily rectified, granted, but still. They can also create massive singularities a limited amount of times per day – with devastating effects.

The Nebula dragons can cause cold damage as well as radiation exposure with their breaths and they do receive a nice, defensive concealment-granting cloud of particles and may unleash a magic-suppression cloud a limited amount of times per day. Pulsar dragons can dazzle those nearby and suppress darkness-based magic completely. Oh, and they have laser breath that may not be effective versus all creatures…but it can pass through e.g. walls of force. Additionally, they may use their breath weapon in pulsing blasts, customizing the damage output of each blast according to his needs. The final stellar dragon herein would be the supernova dragon, whose very presence heats metal and hampers cold creatures. His breath incinerates all that fall before him and he may use is breath in a massive radius around him – said breath is btw. a combination of fire and electricity and yes, their SPs are deadly.

This is not, however, where this pdf ends – instead, we are introduced to the two dragon lords – masters of all conflict/stellar dragonkind. Conflict dragons revere the CR 25 monstrosity called Eschaton. If the name was not ample clue, yes, this basically takes the mythic beast from revelations and codifies it not as a metaphor, but as a full-blown engine of annihilation. Whenever one of the 7 heads of eschaton is destroyed, it regenerates a new head associated with whatever destroyed the head, growing stronger…or more versatile. An aberrant head grown can breathe a cone of devastating, mutating slime; a mechanical head has teeth of adamantine and breathes poisonous steam…and a spectral head increases the reach of this engine of destruction to the incorporeal. Oh, and if you’re like me and consider that not enough yet…well, there is a mythic version: CR 30/MR 10.

This beast…is so beautiful. An aura that staggers AND has a 50/50-chance of inflicinting murderous command or terrible remorse. Nigh indestructible. Mythic power to make the breath linger or rip open reality to gate in tentacley doom – awesome.

The adversary of this all-destroying master of annihilation would be the infinity dragon Ananta, CR 25. Encompassing both male and female, this dual-headed dragon (you can see the picture on the cover) has devastating sonic and cold breaths and is quicker when undertaking starflight journeys. The combined blast of the dragon’s breath weapons can destroy just about anything utterly…oh, and ananta can exist in two places at once, treating either as her location for attacks, reach, etc. Similarly to Eschaton, we do btw. receive a truly awe-inspiring mythic version of this steward of the multiverse – at CR 30/MR 10, this iteration of the mighty infinity dragon can create creatures to fight from the dust of the foes vanquished by Ananta. Similarly, the multi-existence ability and a benevolent, exceedingly powerful music of the spheres complement an awesome, unique take on the mighty dragon lord.

Editing and formatting are very good – beyond minor hiccups, I noticed no significant glitches. Layout adheres to LPJ design’s gorgeous two-column full-color standard and a smaller version is provided in case you want to use this on mobile devices. The artwork is absolutely staggering and excellent – both the mugshots of the dragons and the two full-body renditions of the dragon lords are gorgeous. The pdf comes fully bookmarked for your convenience.

Jeff Lee delivers here – the dragons presented in this book utilize unique, evocative mechanics, have cool, unique themes that set the apart and the superb artwork further emphasizes that – seriously, one glance and you’ll want to use these asap! The pure imaginative potential of these dragons is impressive indeed and the book, as such a steal for its price-point, particularly if you’re like me and enjoy truly devastating adversaries to challenge your players. My final verdict will clock in at 5 stars + seal of approval.

You can get these superb dragons here on OBS!

If you enjoy the high-concept awesomeness of this pdf, you may also want to check out LPJ Design’s kickstarter Crisis of the World-Eater – as per the writing of this review, the unique saga is fully funded and has but 16 hours to go – so it’s now or nothing! You can find the KS here!