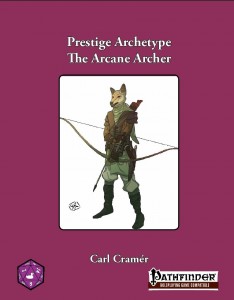 This installment of the Prestige Archetype-series clocks in at 10 pages, 1 page front cover, 1 page SRD, ~1/2 a page of editorial, leaving us with 7 1/2 pages of content, so let’s take a look!

Each of the classes has classes listed as “build classes”, i.e. ones that influenced the design of the prestige archetype. As written, they do not act as alternate classes and do not lock you out of multiclassing, something to bear in mind regarding balance.

Now let’s take a look at the arcane archer! The class receives 3/4 BAB-progression, d8, good fort- and ref-saves, 4+Int skills, proficiency with simple and martial weapons and light armor (and suffers no spell failure chance in light armor and still suffers spell failure in light armor when casting arcane spells from other classes – nice catch!) and they learn to cast spells from the sorc/wiz-list, of up to 6th level. Arcane Archers cast prepared spells, governed by Int and thus need to maintain a spellbook.

At first level, they also receive an archery pool of 1/2 class level +Int-mod. This pool can be utilized, analogue to the magus, to provide temporary enchantments to the archer’s bow as swift actions. The bonus (and conversely, the weapon qualities that can alternatively be applied to the ranged weapon) increases by +1 every 4 levels, up to a maximum of +5, with alignment imposing potential restrictions – no unholy enchantment for good archers, for example. What’s odd here – since the class has a restriction that the thing needs at least +1 enhancement, meaning that the +2 equivalent enhancements can only be applied to already enchanted bows – kind of clunky.

At 2nd level and every 4 levels thereafter, the archer may select a bonus feat from the archery style provided, with 6th and 10th level increasing the breadth of feats to choose from. Spell Archery is interesting – granted at first level, the arcane archer may, as a full round action, imposes a -2 penalty to all attacks and cast a spell with a casting duration of 1 standard action or less. Multiple attacks are covered here as well – either you attack first or cast the spell first – no attack/spell/attack-tricks. On the extremely nitpicky side, only failure of concentration regarding defensive casting is covered, though the ability should probably specify the potential for spells being wasted by any type of failed concentration-check. If one were to be nitpicky beyond even my standards, explicit note that the spells still provoke AoOs would have been nice, but that is a) inferred by conjecture of the defensive casting caveat and b) evident from the rules of spellcasting.

At 3rd level, the arcane archer receives ranged spellstrikes – and here, I expected an utter clusterf*** – and was positively surprised – the ability allows the arcane archer to deliver ranged touch attack spells alternatively via her bow as a ranged attack at her highest BAB – the interaction between spell and weapon damage are covered quite professionally. Now, again, on a nitpicky side, I would have liked the ability to specify that the -2 penalty when used in conjunction with spell archery still applies – or does it? If it doesn’t this allows the class to get rid of it for ranged touch-based spells.

At 4th level, the class receives spell recall via the archery pool and at 7th level, the class may expend points from the pool to prepare up to int-mod spells as if they were in the archer’s spellbook – here a scaling mechanism would have been appropriate – one point per spell level, for example. Otherwise, high level spells cost as much as low level spells.

Imbue Arrow allows the 8th level arcane archer to use bow-range for spells and thankfully cannot be combined with seeker or phase arrows. At 9th level and every 5 levels thereafter, an arcane archer may also reroll an atk or force a foe to reroll an attack that has hit the archer. At 11th level, seeker arrows ignore cover and concealment and cost a swift action and 1 point from the archery pool.

Improved spellr ecall is gained at 12th level and the armor-ignoring phase arrows make an appearance at 13th level, once again costing points from the archery pool in addition to being standard actions. The iconic hail of arrows is gained at 15th level and a countershot (with a limited range) makes for another nice high-level ability. Finally, at the highest level, the class receives slaying arrows and as a capstone, no longer needs to make concentration checks when threatened while using spell archery.

The class also receives favored class options for the core-races, with especially the gnome gaining more available enchantments for the pool being nice.

We also receive level 1, 5, 10 and 15 builds of a sample character including sample spellbooks (nice!) and also new feats: Counter-missile allows you to forgo an attack in the following round (and expend ammunition) to negate a ranged attack that would have hit you. While I like the caveat versus large missiles, the feat has a massive issue – it does not specify the attack lost – can one choose e.g. the third shot at -10? What if one uses Spell Archery with Ranged Spellstrikes? Manyshot? Regular Rapid Shot? I’m not 100% sure how precisely this one is supposed to work, though I love the imagery.

Deadly Calm negates the penalty associated with deadly aim when using composite bows for the first attack (ouch!) and extra archery pool increases the pool-size by +2.

Author Carl Cramér has a tough sell for me personally here and I honestly expected this one to SUCK. Good news first – it doesn’t! The author has managed to provide a take on the ranged caster/bowman based more on the magus and still providing the various iconic tricks of the arcane archer. The way enhance arrows has been changed is more in line with the magus’ tricks, but there we have the one issue with this class – it’s scaling of ability-gain is a bit off. Fifth-level alignment-based damage feels like a bit much when compared to the PrC. That being said, at least the enchantments cost a solid resource and the streamlining of abilities to use one resource can be considered a massive improvement over the base class. Now, the class does have some balance-issues: The arcane archer receives almost all of the magus’ exceedingly powerful tools for versatility – spell recall, knowledge pool, etc. -which may seem appropriate, considering the similarity between the classes. HOWEVER, the ability to imbue arrows, exceedingly powerful, still has an issue carried over from the original ability of the PrC- the option to shoot AoE-spells on squares instead of foes for a ridiculously easy shot exploit the original class did not cover.

Another issue, quite frankly, is that the very powerful ability to imbue arrows, combined with a magus’ flexibility, just makes for an exceedingly strong array of tricks, stronger even than the PrC. Is this a bad class? No, and it demonstrates the author’s capacity to make more than solid crunch, but it also adds more flexibility to the concept than is necessarily balanced. Why? Take a look at regular damage-output of good archers. Then take a look at what magi can dish out. Combine that. Result? PAIN. Especially since wiz/sorc ranged touch attacks can come off as rather nasty – while spell level of up to 6th don’t look that bad, the class can be made into a true monster. Is it broken? Not necessarily, but if your players are adept at optimizing, this class becomes too powerful and can blast its brethren out of the water.

It is mainly due to this fact that I can only rate this 3 stars, but consider me excited about the rest of the series!

You can get this interesting piece of crunch here on OBS and here on d20pfsrd.com’s shop!