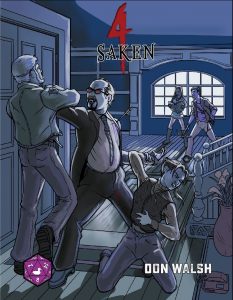 This game clocks in at 97 pages, 1 page front cover, 1 page editorial/ToC, 1 page back cover (though this also contains the crucial percentile chart called Master Table- nice use of space!), leaving us with 94 pages of content, so let’s take a look!

This was moved up in my review-queue as a prioritized review at the request of my patreons. The review is based on V. 8 of the pdf.

The open-source 4C-system is usually used for superhero roleplaying may be open source, but tying it to the horror genre? Can that work? Well, to begin, I have never played the 4C-system prior to getting this book – probably because superhero comics and roleplaying aren’t as popular here in Germany as they are in the US. Anyways, I’ll thus treat this book as a stand-alone system, so can this explain how the game is supposed to work?

Well, we begin with an explanation of the basics – much like Basic, we use D%s to determine success or failure – the higher you roll, the better…though 00 and 0 mean 0 here, not 100. PCs are known as Survivors and NPCs are designated as contacts. The master table mentioned is used to determine whether something attempted is a failure, close call, successes or exceptional successes (also called Aces) – at one glance, you can look at the table and determine the result, making the process of playing relatively simple and fast-paced. Rows can be seen on the master table and sometimes, there would be row steps that determine how the master table is consulted. Skills change that, just fyi – basic skills provide +1 Row shift (RS), expert skills +2 RS etc. Players begin with 4 skills and may gain more. This would btw. be as good a place as any to mention that each chapter is headed by a nice, flavorful piece of fiction – kudos for the mood-setting.

After a nice piece of introductory prose, we dive into the character generation: First, you determine a background, which modify the Measured Traits (basically the attributes), contacts known and the skills of the character. A random table is featured, if you prefer to randomly roll these and some of them do have sub-choices: Believers may opt to become parapyschologists or psychics, for example. These generally also allow you to exceed the usual cap of 19 for your trait.

Very nice in comparison to other horror rpgs: The inevitable loss of control that you will experience due to fear/insanity can be chosen in advance – this would be the so-called instinct. Instincts confer bonuses and penalties and determine how the survivor handles orange or red levels on the master table of stress: From bargaining and fainting to going berserk, martyr-complexes and concealing a monster beyond your charming façade, the array of choices is nice, but most assuredly can use further expansion – a good thing, in this case, at least as far as I’m concerned.

Next would be traits: AT character creation, you gain a total of 60 points to distribute among your seven Measured Traits: No such trait may be less than 01, none higher than 19 unless modified by an appropriate background. The measured trait would be Melee (M), Coordination (C), Brawn (B), Fortitude (F), Intellect (I), Awareness (A), Willpower (W). Beyond these, there would be Figured Traits: Life is equal to M + C + B + F. When life is reduced to 0…well, guess what happens. Luck is I + A + W and can be used to improve checks and stave off death. So far, so simple.

Skills are next: They are associated with measured traits and when you’re using a Measured Trait associated with a skill you have, you gain RS. If you choose a skill twice, you become an expert, increasing the RS. Specialization allows for further RS pertaining a subtype of uses of the skill. Melee covers close combat, shielding, unarmed combat, for example, while Intellect covers significantly more: Lore, Knowledge, Mechanic, Medicine, Politics, Craft, Interrogation, Investigation, Science, survival – the inequality between Measured Traits here obviously helps balance them amidst themselves.

Now that the skills are taken care of, we move on to gifts: These have three designators: Natural, paranormal and psychic. Some backgrounds provide gifts, while others don’t…but each Survivor receives one gift at character creation. These range from alertness to analytical minds, being lucky, having a kind of personal magnetism, immunity to a narrow field or being brilliant beyond one’s time. What about clairvoyance, spirit guides or pyrokinesis. Finally, akin to Shadowrun’s connections, we determine the NPC contacts of the respective survivor.

Survivors advance by typically gaining +5 life after an adventure…but also -5 luck…sooner or later EVERYONE’s luck runs out. Alternatively, the life increase can be foregone in favor of gaining a new contact or replacing a lost contact…or negate lingering physical or mental trauma.

The next chapter illustrates how the Master Table is utilized – with play examples that illustrate the process rather well. Considering the simplicity of the matter and the fact that I covered that aspect before, let’s take a look at combat, which works as follows: The director determines the actions for all NPCs under his control; then, the Players announce the actions for the Survivors. All declared defensive maneuvers are taken; then, all beings act in order of their Awareness trait, from highest to lowest. Coordination or Menace (mostly BBEG-material) ratings are using to break ties. Players may spend luck to act sooner – 5 Luck lets them jump ahead by one step…but only for one round and then, the precious luck is GONE.

The use of defensive maneuvers in combat, whether blocking, hitting or escaping, is pretty simple in theory and practice: They use RS, the color-coded results of the Master Table and still allow for meaningful options. A full day’s rest regains Fortitude score Life, though lethal damage only heals after other damage has healed and require Medicine to heal properly. Similarly damaged Measured Traits only heal slowly.

Sometimes, the strength of substances is required to determine successes, which is why a handy table features just that. Weapons have a damage-bonus, a skill type used in conjunction and weapons have a rate of fire and a shot number before reloading is required. Armor is also covered…and yes, the book covers archaic and modern weapons and shields – so whether you prefer the medieval or contemporary context, the game’s got you covered.

Directors will also appreciate hazards being noted (thankfully for us Europeans, Heat etc. also come with Celsius-ratings…Fahrenheit makes no sense to me and is a pain to convert) – from falling to poison, the basics we have come to expect are covered…but how is fear covered? Well, once again, we employ the Master Table and the surprising simplicity of the system works well in conjunction with the fear roll – the higher a Menace score is, though, the harder it will be to actually resist the respective threat. You may spend a TON of luck to remain in scenes…but do you?

Anyways, the book also provides several sample menaces, from the classic grey aliens, to parasitic infiltrators, hell beasts, seducer demons, ghosts, chupacabras, mad cultists, vampires, werewolves – you know, basically the classics, though several sample NPCs/stock characters and animals similarly are compiled for your convenience. Considering that horror is the trickiest genre to pull off in roleplaying games, the pdf does provide some pieces of advice for the director/GM.

The pdf also provides two introductory scenarios – both of them feature nice b/w-maps and even a handout…oh, and there’s another thing you may note: Both are actually…*drumroll* INTERESTING. They don’t suck. One focuses on a fateful trip and provides menaces of a distinctly supernatural bent, whereas the second, themed around sleep, feels very much less action-centric and closer to the investigative horror side of things, with a more subtle bent…at least, for a while. For introductory scenarios, these do their job rather well.

The pdf concludes with a handy index and a nice character sheet.

Editing and formatting are excellent, I noticed no significant issues. Layout adheres to a printer-friendly two-column standard in b/w and the pdf sports nice b/w-artworks. The cartography’s neat as well, though I would have loved player-versions. The pdf comes fully bookmarked for your convenience.

Don Walsh, with additional input from Mark Gedak and August Hahn and fiction by Perry Fehr, Anthony Torretti and Dan Newton, deliver a book I didn’t realize I wanted. You see, I love GUMSHOE, but am not always sold on the failing forward aesthetic or the simplicity of resource management, in spite of the cool tricks the engine provides; similarly, I adore being butchered in Call of Cthulhu, but find myself wanting, at least for longer campaigns, for a bit of more staying power. This system falls pretty neatly in the middle: Your characters will be pretty capable, but luck still plays a crucial factor regarding results garnered. The cool thing, at least for me, lies in the middle ground: The RS-mechanic on the Master Table makes translating GUMSHOE scenarios pretty easy; similarly, CoC-modules are relatively easy to adapt, both being d%-based, which opens a huge array of awesome material if you’re willing to do some minimal work. The system, as a whole, generates characters with a minor, fighting chance, but still vulnerable enough.

The one issue I see here is somewhat akin to most such systems I encounter – there are some components of horror gameplay I’d love to see expanded; the obvious first would be sanity and luck-development over time, the second would simply pertain more supernatural tricks and hazards to throw at the survivors. This is NOT intended as criticism, mind you, but rather as an expression that I’d like to see this RPG expanded – there is some serious potential here and while it will not (yet) replace my horror-favorites, I definitely can see myself playing this. Moreover, much like aforementioned systems, this system is easy to learn – reading the rules once was sufficient to grasp EVERYTHING, making this a viable option for less experienced players and GMs, particularly thanks to the didactically smart presentation, which undoubtedly shows some of the experience of Mark Gedak in the teaching circuit.

All in all, this is a nice, inexpensive, simple to grasp RPG and well worth a final verdict of 5 stars, just short of my seal of approval…I’m looking forward to seeing more material for 4Saken!

You can get this nice, inexpensive horror-game here on OBS!
Endzeitgeist out.