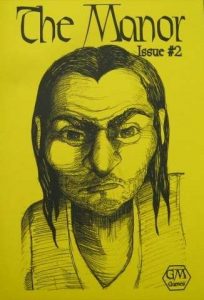 The second installment of the OSR-zine The Manor clocks in at 24 pages, 1 page editorial/ToC, leaving us with 23 pages of content. Front cover and advertisement/back cover are its own pdf; additionally, we get an alternate layout to print this out in booklet form: You know, first and last page on the same page, etc. – that is pretty damn cool!

Now, it should be noted that this pdf does assume a silver standard and does not subscribe to a particular OSR rules-set. AC is provided both for ascending and descending paradigms and HD and HP are noted, melee damage types are generally not differentiated. Similarly, it is not defined which type of saving throw to employ, which can be a bit inconvenient.

Now, as in #1 of the magazine, we do get a nice 12-entry-strong dressing/treasure table by Jason Sholtis, this time things that may be found left behind under the cot in the second location depicted herein. It should be noted that this is the only part of the pdf where magic items are properly formatted.

The second location sports a total of 8 magic items that can potentially be found; rules-wise, they are problematic: The second locale can’t seem to decide whether “cold damage” or “frost damage” (misspelled as “front damage”) would be the proper term; formatting doesn’t adhere to the standards and there are big problems here: The dirk of healing is a sucky weapon, but can be heated and pressed to a wound to heal 1d6 damage. There is no limit. This item provided, RAW, infinite healing. The shield of entanglement notes this: “…acts as a +3 medium shield and once per day the it can entangle one hex/square. The vines from the shield reach out and wrap around its target.” I did not modify this sentence. So…what size of hex are we talking about? Hexcrawl hex?? What effect does “wrap around the target” have? Like entangle?

The artifact killer presumes the existence of a global order of potent beings (more on them in my upcoming review of Knowledge Illuminates): The item is basically a scorpion statuette that can destroy any item, including artifacts. While the GM retains control over the duration, this can wreck many a plot and contradicts pretty much how artifacts work in every setting I know. Not a fan. Leather armor or regeneration sports another infinite healing issue: The armor grants infinite healing. Worse, it fails to understand how regeneration works, rules-wise. You see, the current owner of the armor is in a situation where he regains HP, then immediately dies, again and again. I like the nightmarish nature of this fate, mind you, but the matter of fact remains that this is not how regeneration works in any OSR-game I am familiar with, not even starting with chances to be raised…

So yeah, the magic items herein fail pretty much across the board, which may also be due to the fact that they are part of the second half of the magazine…but to elaborate that, I need to go into SPOILERS pertaining the two set-pieces herein.

All right, only GMs around? Great! So, the first location herein is really, really cool: We are introduced to Hugo’s Potion Shop, owned by the grumpy, nasty mage-school/guild drop-out, the place has a pawn-shop-like atmosphere, with an angry dwarven bouncer and a nasty attitude. How can he stay in business? He sells healing potions by the bulk, at half price. Sure, a precious few of them don’t work properly, but who cares when the vast majority does work, at this price? After all, chances are pretty high that customers that stumble over one such potion may not be able to return anyway. So yeah, Hugo is not a nice man; his shop also sports a workshop, where three similarly interesting characters toil away at the behalf of their nasty master: We have Clanton, a man with a sweet-tooth who doesn’t mind the monotony of churning out healing potions day after day. There would be a lady with a nasty temper with a facial tattoo that marks her as a convicted criminal and indentured servant…and there is a goblin who actually is the only true professional in outlook and work ethics. 3 of the characters here get really cool, unique b/w-artworks that surprised me in a positive way. The map of the potion shop and quarters here is also really detailed, b/w and nice, noting a scale etc. It would have been nice to get a player-friendly map, but oh well.

After the detailed notes on the NPCs (sans stats), we get detailed entries on all rooms of the location. Better yet, we get extensive notes on 20 random customers/encounters, all of which can act as either encounters or be developed into full-blown adventures: Between tragically poor people trying to keep their girl pain-free, a noble patron, unhappy customers and ties to the thieves’ guild, there is a lot of adventure potential here…even before the 7 rather detailed “proper” adventure hooks. This location can most certainly yield weeks of adventure and is a perfect example of my claim that tim Shorts gets old-school aesthetics and mood. Really nice.

…and then, the issue suddenly exhibits a baffling drop in formal writing quality. The second location has potential ties with Hugo’s, is hard to find and interesting: Smuggler’s Inn is a subterranean hideout (fully mapped – sans grid, sans scale): At a dock, you can use a lantern to attract a blind ferryman; the ice-cold Ten Killer Lake houses a massive, nasty and timorous fish called Lord John…and beyond the lake, there is the fully mapped Inn kept by Halla – who is a disguised night hag, with her own larder of Larvae. Bad people that rest here are liable to never wake up again. The Inn gets its own map (no player-friendly version) and exploration of the ice-cold lake (with help of the hag’s potions) could yield aforementioned, problematic items.

Sounds not too bad, right? You’d be right. The location, like the ones in #1 and Hugo’s, does offer some nice visuals; it sports this neat old-school aesthetic I enjoy…and it is littered with glitches. Sentences with words missing, typos, homophone errors (devise vs. device, etc.), malapropisms – even a cursory proofreading check should have gotten rid of at least a couple of them. #1’s editing wasn’t particularly tight and I noticed glitches in Hugo’s as well, but this one? There are so many in this entry that it utterly sinks the location for me. It wrecks any atmosphere created as you stumble, time and again, over a glitch.

Editing and formatting are weird: In the first section of the magazine, I’d call them passable; the second location, though, is an utter mess, both formally and rules-wise, sinking what would otherwise be a cool location. Layout adheres to a 1-column b/w-standard and the b/w-artworks are really nice for the low price point. The cartography is similarly solid, though Hugo’s is far better than the one employed for the second location. The pdf comes without any bookmarks, which constitutes a comfort detriment. Kudos for the make-your-own-booklet-version, though.

Tim Shorts’ prose has a weird fascination for me: There is an elegance to the crisp and relatively brief, almost minimalist sentence structure he employs – the style appeals t me more than it should. He gets his old-school vibe right, big time, and Hugo’s is a truly inspiring place with surprisingly well-rounded characters. I loved this place; the first half of the pdf is really, really cool and worth the fair asking price.

…as a reviewer, though, I do have to rate this in its entirety. And the rules-issues and inconsistencies as well as the really bad accumulation of glitches in the second half managed to utterly sink the second location for me. If you don’t mind rules-issues and glitches galore, you amy well enjoy this section as well, but frankly, it looked to me almost like another person wrote it, so massive is the difference in quality.

Sooo, is this worth getting? Thanks t the low price, I’d reply in the affirmative, but with the caveat that you should be very careful with the problematic second location. And yes, in case you’re wondering, later issues of the e-zine improve regarding the rules aspect and the glaringly inconsistent formatting of rules-components, but I’m getting ahead of myself. How to rate this, then? Well, while I really enjoyed the first location, the glitches really sink a large part of this pdf for me, which is why my final verdict will clock in at 2.5 stars, rounded up by a tiny margin due to in dubio pro reo, the low asking price and the fact that this pdf does manage to convey the author’s passion for the respective places depicted.

You can get this inexpensive e-zine here on OBS!