Letters from the Flaming Crab: Her Story

Letters from the Flaming Crab: Her Story 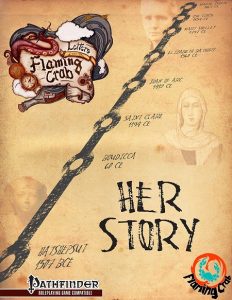 This installment of the Letters from the Flaming Crab clocks in at 16 pages, 1 page front cover, 1 page editorial, 2 pages of SRD, leaving us with 12 pages of content, so let’s take a look!

So, what is the theme here? Well, beyond the obligatory letter from our favorite plane-hopping ship, the book covers historical women and translates components associated with their lives into PFRPG-mechanics – but we also are introduced to the basics of their respective stories, as the eponymous title suggests.

The first of these women would be none other than Countess Elizabeth Báthory and the pdf begins with a thematically appropriate inquisition that allows the inquisitor to drain blood from helpless victims, collecting up to 3+ 1/2 class level vials of blood that way; consuming a blood vial heals the inquisitor…and yes, while you can use kittens, you can’t abuse the ability: The stronger the citim, the more healing. No complaints whatsoever here! 6th level nets a slightly improved touch of bloodletting as an SP. So far, so nice, even though I think the countess (and quite a few other females here) could carry their own Letter from the Flaming Crab!

Next up would be famous Queen Boudicca, whose supplemental material would be a magical item, The War Queen’s Chariot, a little figurine that can be called forth to become a proper chariot, complete with team and horses…oh, and it helps owners that have the Leadership feat. Thematically sound.

Saint Claire of Assisi has a more complex piece of crunch to support her: We get the cenobite inquisitor archetype (no, has nothing to do with the Hellraiser Cenobites) -the archetype receives a modified list of class skills and gain proficiency with teh battle aspergillum (YEAH!), club, light mace, quarterstaff and sling, but neither armor or shields. The archetype gets basically a monk’s AC/CMD bonus +1/2 class level to Diplomacy and Sense Motive instead of stern gaze. They may add Wis-mod on all Knowledge checks instead of gaining monster lore – while I’m not the biggest fan of two attributes to a skill, particularly at low levels, I can live with that. A cenobite loses the destruction, justice and smite judgments, but gains scaling bardic performance. At 2nd level, cenobites may forage in urban environments and gain class level to Survival checks. Bonus feats are modified so cenobites may take metamagic, item creation or bardic performance-influencing feats or the Virtuous Creed feat, replacing teamwork feats. At 5th level, they may make their weapon merciful as a swift action, at 12th level compassionate and 14th level allows the cenobite to use Diplomacy to stun foes via her words of peaceful intent Wis-mod times per day. As a capstone, the archetype gains a super judgment that may cause targets to surrender immediately.

There also are 4 new creeds for use with the Virtuous Creed feat – Abstinence, Chastity, Obedience, Peace and Poverty, all with their respective boons. I know. Usually I’m all about the bloody, evil, tentacle-studded stuff…but I really like this archetype. I would have switched some components around a bit, but generally, this offers a different and flavorful playing experience. Kudos!

We had religion, so now we get SCIENCE! Doctor Marie Curie comes with no less than6 discoveries and a grand discovery pertaining radioactive bombs – which can be upgraded to have a half-life or fire damage via Alpha Decay, The attribute damage causing Beta and Gamma Decay may be a bit strong for 8th level prerequisite and 12th level prerequisite and the grand discovery is the massive culmination of the discovery tree. Weapons and armor may now be radioactive and deal radiation damage, which is slightly problematic, considering there is no such standard damage type or means to negate it. While the book provides means to resist radiation damage via spells or lead and leaded glass as a material and the like, slightly more extended notes for introducing radiation damage on a more wholesale level would have been appreciated – are constructs affected? What about crocodiles and similar notoriously radiation resistant creatures? I like the idea, but consider the implementation a bit too ambitious for the scale it has here. We also get a new trait here.

Hatshepsut, one of the famous female pharaohs, gets a paladin archetype, who replaces divine grace with 1/2 class level to Bluff, Intimidate, Diplomacy and Perform checks. At 4th level, the archetype replaces channel positive energy with a 60-ft radius aura for a bonus to saving throws and a bonus to atk as part of a charge. At 10th level, the bonuses increase and if the ally worships the same deity, weapons are treated as magical for the purposes of overcoming DR. While not bad and concept-wise nice, the magical benefit at 10th level is pretty weak; the archetype could use some serious signature tricks.

Joan of Arc does probably not need an introduction – she gets a paladin archetype as well, the visionary, who replaces lay on hands and mercies with a mystery, codifying bonus spells gained properly within the paladin class’ frame work and a revelation at 3rd level and every 6 levels thereafter. 3rd level also nets an oracle’s curse and codifies spells gained properly as well. 4th level provides the divine messenger ability for a 1/day trance that can duplicate progressively better divination tricks, replacing channel energy thus. Also intriguing: The visionary gets the bloodrager’s spell allotment, but not spell list and the archetype also has a solid apotheosis capstone.

Osh-Tisch would be up next and her material would be the order of the crow cavalier order – generally, the order is nice and focuses on retributive challenges and demoralizing foes. On a nitpick, one ability substitutes her charging bonus for an attempt at an Intimidate check – charging bonus is not proper rules language, and while the intent is pretty clear, I still felt this could be slightly more precise. The high level ability features the option to call forth spiritual allies that can be sacrificed as breath of life effects – which is a great visual! The write-up also features a nice magical club and three teamwork feats (which, while designated as such in the header, lack the type in brackets behind the name): Covering Charge and its Improved version, who allow for nice synergy between ranged and melee weapon using allies; the final feat in the chain, Opportunistic Charge, requires a ton of prereqs, but is beautiful -it allows for allied ranged weapon users with the feat who are nearby to shoot targets with AoOs if you get an AoO against an enemy. This can provide some seriously cool tactical tricks.

The final famous lady of legend we cover would be none other than visionary queen of horror Mary Shelley. We receive a statblock of Frakenstein’s monster here at CR 11, but honestly, I am severely underwhelmed by it. No truly unique ability, no hearkening to the modern Prometheus mythology or the book’s message – instead, we gain a slightly upgraded flesh golem when the subject matter deserves so much more.

Editing and formatting are good, though not as tight as in some of the Letters. Layout adheres to Flaming Crab Games’ two-column full-color standard with historic renditions of the famous woman who inspired the material. The pdf comes fully bookmarked for your convenience.

June Bordas, Jennifer R. Povey, Lindsey Shanks and Margherita Tramontano with J Gray as developer provide a fun array of options; honestly, I expected to be underwhelmed or find at least one glaring glitch in the rendition/information provided for the women herein. While this is no encyclopedia, it is indeed a great way to take a look and become interested in these famous women. Beyond that, the pdf has managed to grab my interest in several ways I did not expect; I for example did not expect to like the blood inquisition (much less find it cheese-resistant!) and the same holds true for the Joan of Arc and Saint Assisi archetypes – I’ve seen so many of them thematically, but these actually provide a novel playing experience. I similarly liked the teamwork-feat chain, which provides some cool tactical options. While I’m not sold to the same extent regarding other options and consider the Hatshepsut-archetype to be too bare-bones and filler, as a whole, this is well worth the low asking price. My final verdict will clock in at 3.5 stars, rounded up to 4 for the purpose of this platform. Can we have full installments on some of these themes?

You can get this interesting installment in the series here on OBS!

This is also part of a charity bundle for J Gray and his family – you can find that bundle here!
Endzeitgeist out.