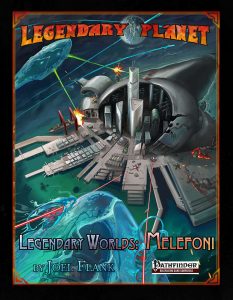 I was a backer of the Legendary Planet AP-kickstarter, but had no hand in the creation of this pdf. My review is based on the PFRPG-version.

Melefoni was once a pristine, aquatic world, far from major traffic routes through the vast infinity of space – all of this changed when the colony-ship Trailblazer crashed into Melefoni after a catastrophic hyperdrive malfunction. This, as it turned out, would have far-reaching consequences for the world: The human colonists made the best out of the situation of being stranded, but they brought with them microbes; the hyperdrive leaked, the impact changed weather patterns – and the consequences of The Corruption thus brought required adaption – or extinction. The native asquenti did not understand the changes to their eco system – and thus, when they encountered the human aliens, conflict was always an option, though a misunderstanding ultimately was the cause of the hostilities erupting, resulting in a 12-year war waged between the high-tech wielding alien colonists and the asquenti’s sonic tech.

The war only ended when the asquenti were nearly annihilated by a kraken assault, while the colonists were hit by Hundoon, the wandering typhoon, and almost sunk – which would have been catastrophic for the floating city. This turned the hot war cold – but the colonist’s attempts to stop the typhoon proved fruitless, until the humans managed to strike a deal with hags. For the “low” price of a few individuals a year, the hags would blunt the force of the storm…and only a few would return from them, with females giving birth to changelings.

Thus, Melefoni (fully mapped, but no player-friendly version is included of the map) is currently existing in a rather tenuous state of tense ceasefire, and hostilities, catastrophic climate change and worse continue to threaten everyone. The colony-city gets full settlement statblocks (with a special quality that allows for easier technology perusal), and we learn about the different parties championing other priorities. Currently, the Warhawk party is in control, though there are alos those seeking co-existence. The pdf also presents three local deities, with notes on domains and subdomains, favored weapons, etc., though, honestly, I don’t know why these are here – they don’t really contribute a lot. That being said, the 4 points of interest once more are interesting – an arena of hard water? Cool!

We get stats for the humanoid crustacean asquenti – they are CR 2, have an incredible sight, and can fire lances of sonic energy with their claws. The statblock has a pretty massive formatting glitch: The Sonic Pincer ability is not properly bolded and isn’t even its own line – we just suddenly have the text start right in the middle of the previous ability. We do have some notes for a few variant asquenti.

The race can also choose from a selection of 4 different feats for them – but since they’re not playable, I think I’d have gone a different route here. The  pdf also has the envy subdomain for Charm, with a gaze that lets you force targets on a failed save to hand you possessions. It’s okay, but not mind-blowing. There also is a focused water elemental school – hydraulic. This one is actually pretty nice, with hydraulic blasts that have properly codified damage output, etc.

As you have probably surmised, this pdf uses the Technology Guide, and presents two new weapons – the sonic cannon siege engine and the pressurized water cannon – both of which are used by the asquenti supermersibles, inverted submersibles that allow the asquenti to emerge from the waves – courtesy of their sonic resonance propulsion, which is properly codified. Two supermersibles are fully stated for your convenience – awesome! Two new pieces of technological gear are provided, with the first being the sonic grip, which allows for fine manipulation of objects etc. – this allows the claw-using asquenti to execute fine manipulation, as they can use their abilities to recharge the item. An issue here: the sonic grip has no formatting beyond the header. The second piece of gear is the water sheath, which creates a DR-granting shield of water that also allows the aquatic asquenti to work above the waves.

The pdf concludes with an array of different adventure hooks – these are pretty neat and feature a couple of cool angles to develop.

Editing is good on a formal level, and precise regarding rules-language; formatting, however, is pretty rushed – there are a couple of instances of pretty obvious glitches there. Layout adheres to the series’ two-column full-color standard, and the pdf sports neat, full-color artworks and great cartography of the planet’s surface, though there is no key-less version of the map provided. The pdf comes with a few bookmarks that have been copy-pasted from The Scavenged Codex; as such, their names are incorrect.

Joel Flank’s Melefoni is a per se cool world, though one that didn’t excite me as much as I hoped it would: The climate catastrophe/colonial angle is cool, and I like the asquenti, how their sonic tech makes sense and explains how they could build their supermersibles. There is logic here. The subdomain, deities and arcane school feel a bit like filler to me, and like space that could have been used to further develop the interesting materials here: For example, rules for the effects of the Corruption, for the typhoon, you know for components unique to Melefoni. All in all, I consider this to be a super-cool set-up that doesn’t live up to its potential, mainly due to not prioritizing its strengths. My final verdict will hence be 3.5 stars, rounded up due to in dubio pro reo.

You can get this conceptually cool world here on OBS!

While my review is based on the PFRPG-version, you can also get this for other systems:

You can get the SFRPG-version here on OBS!