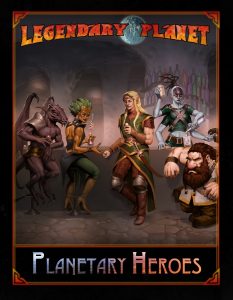 Wait, before we do, let us make one thing clear: The characters presented herein are pretty much in line with the Player’s Guide – this means that the awesome fish-out-of-water-style alternate introduction championed in the optional prequel “The Assimilation Strain” is not considered to be the default for these guys…just so you know. This also means that the characters herein will begin play at 2nd level. From a formal point of view, the characters herein would be 20 pt.-buy characters, though each of the entries does provide scaling information for those of us who, like yours truly, prefer the grit and increased challenge of 15 pt.-buy characters.

The characters themselves make, just so you know, use of the material presented in the Legendary Planet Player’s Guide. This means that the new races presented are employed in the builds. The pdf also follows the format of Legendary Games’ pregens in that it very much has the goal of presenting mechanically-relevant character options that still feature options, skills etc. that make them feel organic. Formatting-wise, each of the characters comes with a one-page full-color artwork supplemented by a quote pertaining the world-view of the respective character. Beyond the statblock, each of the pregens comes with a detailed background story, physical description and personality. Advancement notes are presented as well and considering the mythic nature of the AP, the advancement notes also cover the most likely mythic path to follow. The entries also come with helpful and flavorful roleplaying ideas – so that would be the structural set-up.

But what about the characters? Well, the first would be Spinser Zayne, an auttaine fighter/gunslinger, who has used his construct-y build points for a hidden storage, low-light vision, natural armor and sprinting. Born into a clan of vagabonding smugglers and turned into a powerful gladiator, he is defined by his need for survival, for maintaining his existence. His build is pretty open and the presence of Disable Device among his class skills (via a trait) adds some magic-using capabilities in the future of this guy. Zayne is powerful, but evocative and his disbelief pertaining an afterlife makes for an interesting angle to RP.

Floreisley Avergreen, a chlorvian sorceress with the verdant bloodline, would be next – and her attitude is a far cry from Spinser’s pragmatism: Floreisley is an idealist who sees that the world is cruel and full of suffering, yes…but at the same time, she vehemently believes that helping the totality of beings, that supporting everyone and being helpful, will ultimate improve the fate of all. Her infinite optimism and charitable nature makes her a strong candidate for the face of the group, for a leader with a vision that is actually a joy to portray. And yes, I *am* inclined towards playing idealists with a vision, in spite of my cynicism – and I’d play her. Perhaps because her wide-eyed wonder regarding natural beauty and sights and her morals reflect pretty much what I aspire to be.

Kanor Delfina would be a tretharri cleric with the knowledge and healing domains; being tretharri, he has 4-arms and I welcome this series not focusing in the class-choice on making a shredder-type of character, instead focusing on a powerful build, yes, but one that does represent the fact that the race does not consist solely of melee monsters. In fact, he is guided by something I very much can relate to – the true wonder of seeing the stars for the first time; of truly grasping their significance and meaning, the infinite vastness, the infinite possibilities provide a clerical angle that is relatively novel and unconventional.

Girrun Snik would be a zvarr rogue – and is a mathematical prodigy, which also, with his get-rich-quick-schemes, account for his less than reputable past and class choice. As a unique angle, his conviction lies in the belief that the universe is ultimately a game of numbers, stochastic probabilities…and the meta-joke is that he’s right. So the one player who likes breaking character, doing the numbers, making observations over the likelihood of the outcome? Yep, this guy is perfect for you…and the angle should actually make that type of behavior more acceptable for the other players! Very cool.

Rhydis Kolmainsus would be a human bloodrager with the draconic bloodline, jagladine experiment #1407, his number forever burned into his shoulder. Once a happy-go-lucky man, the pain and suffering inflicted upon him has changed his very nature, his outlook…but also granted him the means to triumph over the monstrous captors.

Omik “The Clever” Jetruk would be another multiclass option: We have a dwarven alchemist (chirurgeon)/gunslinger (musket master) here. Omik, a foundling of mysterious circumstances, slim and smart, is young for a dwarf – but he does already have some impressive (mis-)adventures under his belt. Equipped with an erratic curiosity, engineering knowledge, capable of driving vehicles and still holding his own in battle, Omik provides a cool option for players that enjoy the versatility that the class combo brings.

Tialua Re’duoth, an elven oracle of life, is somewhat different: As life-affirming as you’d expect someone of her occupation to be, she also makes for another good candidate for the party face/leader role. The theme of the stars and their impact upon our lives similarly establishes the leitmotif of wonder that is present in many of these pregens, though her intense dislike of liars makes for a solid angle to include some righteous anger in an otherwise very positive woman.

Finally, Kato Njalembe would be a human psychic with the rapport discipline. Coming from a quasi-African background, at least regarding the nomenclature, he and his brothers were inseparable…until the fateful day a strange elven client who has taken his brother…as a result, he remains with half-finished inside jokes and a lingering sense of sadness as well as a duality of quietude and rambunctious laughter. Well, perhaps he’ll one day find his brother…and the reason for his ever expanding psychic powers…

The pdf concludes with a page containing the artworks of the characters as miniature cut-outs.

Editing and formatting are excellent, I noticed no significant glitches. Layout adheres to Legendary Games’ 2-column full-color standard for the Legendary Planet-books. The pdf comes fully bookmarked for your convenience. The artworks provided for the pregens are awesome and full-color, though some have been featured before in the Player’s guide for the races.

Neil Spicer and Jeff Provine’s pregens for Legendary Planet are significantly cooler than I expected them to be, to be quite frank. Their damage output and general strength is well on a line, with none outshining the others as better minmaxed or worse built than their compatriots – the characters, in short, provide a concise array of characters that work well as an adventuring party. More than that, the characters actually feel like…well, characters. Not just accumulations of stats, but actual, fully-rounded people that are more than the sum of their stats and tropes. Now, I’ve been pretty vocal in the fact that I prefer the fish-out-of-water approach that includes “The Assimilation Strain”. In fact, I’m still honestly baffled a bit how the whole prologue-introduction into the AP is handled, with both this and the PG basically ignoring it. So yeah, I’m probably not going to use these, unless some PCs die in “To Worlds Unknown” and if you wish to run the prologue, this will probably not be too useful for you.

That being said, if you do want to dive right in, this is a perfect array of pregens for the AP: Read #1, hand these to your player’s and voilà, Sword & Planet action from the get-go! As such, this does its job very well and my final verdict will hence clock in at 5 stars…and though I won’t use these probably, I really enjoyed the characters…which is why this also gets my seal of approval.

You can get these great pregens here on OBS!
Endzeitgeist out.