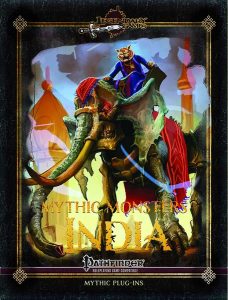 The pdf’s supplemental material this time around contains magic items – greater and lesser offerings of placation, which can be used to attract and place outsiders and undead that subsist on flesh, making them lethargic for a while. We know the concept from mythology and the representation via the rules works well – two thumbs up! We don’t stop there, though – we get brief and concise rules for creating warding manadalas of varying effects, which can be used as optional foci for spells – kudos, though I frankly wished we got more: The concept deserves further exploration. Speaking of which – while similarly brief, I found myself smiling from ear to ear while reading the section called “Cooking Encounters” – you probably know it from our own legends, but quite often, a carefully prepared meal can be the way to defeat a monster. A quick and easy break-down of these rules is included herein. Solid, but once again, an aspect that may deserve further space allotted to it.

All right, as always, we get a variety of mythic creatures, the first of which would be the Aghasura at CR 13/MR 5 learns a whole set of abilities that centers on creating an illusion and camouflaging itself, making the unfortunates it digests potentially not even aware of their grisly fate – nice one! The CR 3/MR 1 triparasura (should be tripurasura, right?) gains a suggestion SP that can be enhanced via mythic power. One of its abilities is missing an italicization. Decent one, but LG has done low CR/MR-critters better. At the same CR/MR, the ratavarna rakshasa is permanently hidden and may generate vicious delusions. Really cool

The CR 11/MR 4 Upasunda gets a whole slew of cool new tricks – not counting as grappled when grappling, ki-based counters and several monk-like abilities – rather nice one! At the same CR/MR, the mythic kabandha gains several bardic abilities – and a unique way to dispatch it, straight out of the lore of legends. Very nice! Once again at this power-level, the CR 11/MR 4 garuda now have abilities that represent their hostility towards naga, the power to emit powerful gales as well as the option to assume a primordial form. Oh, and they can generate healing amrita. Nice one!

The next one is the Bhuta at CR 13/MR 5 and I have not seen that one’s amazing artwork before. It is an amazing example of how to make a mythic creature closer to myths: These guys can generate bhuta milk, which may heal…but also generate rather horrific effects and they can use lesser geas and geas to force others to kill.

Let’s move on to naga-kind, with guardian nagas at CR 12/MR 5 being the first: These fellows gain a stalwart defense-boost and can bellow forth fear-based challenges and defend their domain versus intruders. At 1 CR and MR less, the spirit naga may lace its spells with poison and becoems basically a magical ambush predator via the new abilities gained. The water naga (CR 8/MR 3) gains a level of control over water and all mythic naga-builds gain a level of shapeshifting capabilities.

The Rajput Ambari is amazing: CR 8/MR 3, cool flexibility upgrade to the war stomp and gets a spectral howdah-like entourage of spirits as well as an appropriately frightening trumpet. And the artwork is amazing!

The perhaps most well-known (at least in gaming circles) of creatures is next, the rakshasa, and we begin with the mighty CR 25/MR 10 maharja rakshasa. Vorpal crits. Illusrory doubles. Full enslavements. An ability called “orgiastic revel” (no, it’s not explicit, but oh boy, cool!) and the ability to psychically enslave others as well as an array of SPs – a deadly and amazing beauty of a boss!

The new creature herein would be the CR 5/MR 2 pisacha an outsider that can feed on the anguish of dominated victims being forced to commit horrific acts. Oh, and nasty: Creatures thus forced to act against their convictions actually generate an effect that makes others want to attack them, beginning a vicious cycle of hatred and violence. However, at least they are pretty susceptible to positive energy… The artwork depicting these things is pretty glorious!

Editing and formatting are very good – apart from a few minor hiccups, I noticed no problems. Layout adheres to Legendary Games’ two-column full-color standard and the artworks included are amazing. The pdf comes fully bookmarked for your convenience. Kudos!

Jason Nelson, Loren Sieg and Jeff Lee have created a cool array of critters herein – in particular the maharaja and the rajput ambari are pure awesomeness and may validate getting this on its own. At the same time, I was slightly underwhelmed by a few from the creatures herein, spoiled as I am by the constant excellence of the series. Note that this would still have the creatures stand out in pretty much any other monster-series, so consider this to just be me complaining at a very high level. Still, I couldn’t really shake that feeling, when compared to e.g. the North America or Mesoamerica-installment, that some of these have untapped potential left.

Anyways, I’m rambling – this is a very good offering of monsters, well worth 4.5 stars, rounded up for the purpose of this platform.