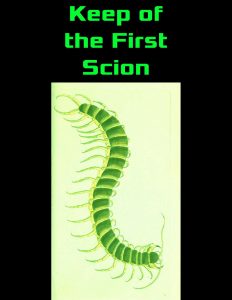 The publisher has responded on OBS (in an kind and professional manner!) to my review with an explanation:

“That being said. Each design choice, down to the atrocious handwriting and over all roughness of this module is deliberate, and at its core a response to the consistent and overwhelming laments of new GMs unfairly comparing themselves to professional APs, like Critical Role to say to these new folk where the bar is for starting out.”

I consider this to be an admirable goal! That being said, this is nowhere evident within the module, its description, etc. – it doesn’t change my review, but it contextualizes the author’s intent rather nicely. So if you think that going DIY might be for you, then this may warrant taking a look at!

This zine-style 2-page dungeon clocks in at 2 pages; these can theoretically be folded, with 1/3 of the first page being devoted to the front cover.

So, there is one thing you need to know about this, and it can be a deal-breaker for you: while the text that explains the premise and background on the first page is properly printed, and so is the explanation of the NPCs, the actual stats of the adversaries faced herein are depicted in a scan of hand-written notebook pages; the map of the complex to be explored also is hand-drawn and scanned in.

Why is this relevant? Well, the handwriting was REALLY hard for me to decipher, and I’m grading a lot of student papers and see quite a lot different handwriting styles. Even after quite a bit of puzzling. And there is really no reason for either choice – you could just type the material, and the map could be drawn pretty easily in free software like explain everything whiteboard and pasted in, making it easier to read and parse. The map also sports no scale.

That being said, what’s the module about? Well, in order to discuss this, we need to go into SPOILERS. Potential players should jump ahead to the conclusion.

All right, only GMs around? Great! So, the premise is simple: The village’s sheep are slaughtered in the night by some horrors, and the sphere-traveling PCs are obviously blamed, which necessitates closer inspection of the eponymous keep. The pdf briefly talks about priest, mayor and constable, and how they interact with the PC’s task.

Inside, a small clique of goblins has been drawn to the resting place of one of the “Creepy God’s eyes” – I genuinely liked this notion of a “Creepy God”; it straddles the line between puerile and evocative; who’d worship such a god? The notion of the deity fits Troika well. The goblins are led by a self-styled priest of the Great Dragon, who believes to eb chosen by “the this God”[sic!]. The Great Dragon is btw. not a dragon per se – it is an insectoid thing nesting around the eye, which also created it. Its “Children.” The remainder of the module is pretty simple – the PCs have to enter the keep (which smells of feces and rotten meat), and gather 4 keys in outlying rooms, while dealing with goblins. While they do that, there’s a chance for interaction with a traumatized Knight of the Road, and fight both goblins and the properly statted (if you can decipher the handwriting) children of the dragon. With the keys, the PCs can open the central, locked door and vanquish the centipede-ish monstrosity.

Interesting complication: Until the place is cleansed, the goblins constantly reanimate as zombies. Okay, cool, how long does it take? Is that immediate, or should it take a bit of time? Considering that the centipede-ish monstrous “Great Dragon” and its ilk have a poison that damages Skill, this could render the module into a bit of a survival experience, which I generally like. The theme of feces is btw. also represented in the pit traps featured in the complex, but no depth or guidance is provided for the effects here. Now, I don’t want high-complexity RPG-levels of detail here, but a brief note about depth at least would have been nice.

Editing and formatting are not very good, particularly considering the brevity of the offering. Layout adheres to a three-column horizontal standard, and we get public domain centipede-images as art. The hand-drawn cartography genuinely looks worse than mine, and I SUCK at cartography; whipping something up via a free program would have taken perhaps 5 minutes – the map’s that simple. The pdf has no bookmarks, but does come with one version optimized for the A5, and one for letterpack (US) paper sizes. Kudos for that – I wish more authors would do this.

Ian Woolley’s little module kinda surprised me; I do admit to having a serious kneejerk reaction of WTF-proportions when I saw the hard-to-decipher handwriting. The set-up is basic, and in contrast to all of his offerings I’ve read so far, this feels like the author didn’t care, or at least not as much. In contrast to e.g. his lovingly-crafted Ætherjack’s Almanac-zini I recently reviewed, this one is, well, is not something I can recommend. It has plenty of white space on the first page that could have been used to explain further, add details or cool ideas – and instead, we get what clearly feels like either a joke I don’t get, or a minimum effort offering. It’s not per se atrocious, and you *can* run it if you can decipher the handwriting, but it’s rough, unpolished, and ultimately not as interesting as many comparable, more polished system-neutral or system-agnostic offerings. As such, my final rating can’t exceed 1.5 stars, rounded up, as unlike some material I reviewed, you can potentially have fun with this. But then again, you can also probably improvise something more compelling.

You can get this little adventure here on OBS.

If you’d like to see a better representation of the author’s craft, I’d suggest Ætherjack’s Almanac I, available here!

If you consider my reviews to be useful, please consider leaving a donation, or joining my patreon. Every bit helps.