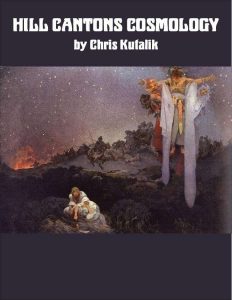 This brief cosmology clocks in at 8 pages, 1 page front cover, 1 page editorial, leaving us with 6 pages of content, so let’s take a look!

So, this pdf is exactly what is says on the tin – a description of the cosmology of the Hill Cantons, which serve as a backdrop for several of the modules put out by the Hydra Collective. But it is frankly more than that.

The world described here would be called Zěm, and after the header, which explains how the world came to be, we begin with a dialog-like frame-narrative that is hilariously irreverent. In the beginning, there was void (or has world-matter existed before?) and all Void was divided in 3 parts – the space of demons, the transitional zone haunted by the Uquitani and the sector inhabited by the mortals, the “Insufferable Void.”

A somewhat doofy Overgod toiled…and then created drink, in order to stop caring. He got horrible drunk, danced upon a gas giant shouted (with a curse) and slipped from it, sleeping for aeons. His spilled drink would become the oceans and when he awoke, he watched. Before inventing Drink. Again. And so he languishes in drunken stupor, while petty demons and gods rage and fight, and below that, the mortals toil.

The world itself has a strong law-chaos leitmotif, realized in a rather intriuing manner: The world is separated in roughly three regions: The corelands, which are akin to our medieval age; no magic, rigid structure, no weird stuff. Contrasted with that would be the Weird, basically pure chaos and your excuse as a GM to throw anything at players. Planar instabilities? Temporal rifts? Every creature you can dream off, from the heaves to the realms of fey….it can just stumble out of the highly magical Weird.

Between the realms of Gonzo weirdness exemplified by the Weird and the rigid Corelands, there lie the Borderlands, where the fantastic exists, but is still beholden to at least some natural laws; it is in this hazy, dream-like in-between-realm that the Hill Cantons and the vast amount of adventure they offer, can be found.

Have I mentioned that this pdf actually managed to make me laugh? Let me quote from the section “On Alignment”: “In his famous treatise Annals of the Fold-Fold Path, Gaxx the Jerk-King teaches us that five-fold alignment (LG, CG, N, LE, CE) is humanity’s limited, warped, half-right theoretical view (or ontology, if you want to get really high-falutin’) of how Zěm’s cosmos works.”

Regarding religion, we have Solarity (Praise the sun!…Dark Souls fans got a chuckle out of that…) and the ancient space gods. Gods are not beholden to mortal alignments and and the pdf goes on to explain various solarist sects, including the “official” one. We are told about the orders that serve the church and the other deities – Hebeka, the Celestial Lady, Ha-Vul the antagonist and also the Old Gods of Pahr.

Similarly, the first beasts, quasi-deific beings created by the grand god – these include the Regimental Goat Koza and Vlenosh, the angry sloth…and beyond these entities, there are the atrophied gods, for all things must wane and perish, even the deities. Finally, the silent god exists, enigmatically, a divine wildcard, whose endgame is yet to be understood.

Editing and formatting are very good, though a few typo-level glitches can be found, most notably that the “cosmology”-header on each pages reads “cosnology”[sic!]. Layout adheres to a printer-friendly 2-column b/w-standard with solid stock art. The pdf has no bookmarks, but needs none at this length.

Chris Kutalik’s cosmology is an irreverent, fun short pdf that made me smile more than once. It is creative, weird and at times even funny. The cosmology presented features several components I consider to be rather enticing and helps illustrate a creative and intriguing world. In short: This is a very fun read. Now, this also is PWYW, which should be considered to be an excellent reason to get this gem right now. It is fun,a good read and even inspiring – whether for scavenging purposes, as a mythology or to add further facets to Hill Canton-modules, this is very much worth getting and leaving a tip for. 5 stars + seal of approval.

You can get this hilarious little cosmology for PWYW here on OBS!