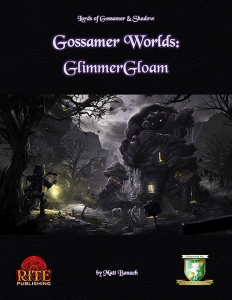 So what is GlimmerGloam? The easiest way to describe it, would be to call it a realm of dark, dualistic whimsy – somewhere between the narratives of the realm of the fey and classic tales of Alice, albeit more akin to American McGee’s interpretation. It is a world, where different species of fey abound and the Umbra rules – where counting steps or latent attempts at cartography only result in the very land thwarting your attempts. It is also a place, where the only influence of eidolon manifests in groundhog-dayish repetitions of feuds, where adversaries conveniently killed the night before suddenly exhibit an improbable twin or downright ignore death or decapitation (and it’s rude to point that out, mind you!) – GlimmerGloam, in a nutshell, is insane and you better know what you’re in for.

Thank the stair, there is this nice BungleCat – not akin our classic Cheshire friend, but oh so much worse – much akin to Rite’s classic Smiles-under-the-Bed NPC, this beast may be nice, but seeing things in a different light, more often than not can be taken literally in GlimmerGloam – the realm is defined by a plethora of meanings being assigned in alternating and even simultaneous patterns to EVERYTHING, with lighting conditions often triggering a flux. Hence, the friendly cat may pretty quickly turn into a xenophobic stalker or even a dragon-sized demon-being trying to murder you and everyone that crosses its path – all in good fun, of course. For reliable information, you may instead wish to consult the jabberwock’s severed head, now employed as the realm’s most deadly jack-in-the-box. Much can be gleaned, if you can survive the deadly eye-rays, madness-inducing aura…you know, all in good fun.

Oh, and if you thought the red queen was bad – GlimmerGloam’s fully statted ruler, the white Rabbit Queen, is nothing to sneeze at – with various forms, an intelligent mirror aptly named delirium and a vorpal needle-cum-sword, she makes for a fearsome ruler – in spite of the half-crashed supposed-to-be-floating castle and similar oddities. Oh yeah, have I mentioned that the oddity of the realm also results in actually unique special properties for the realm?

Matt Banach has a gift for providing environments, in which the imagination is incited, runs rampant and his experience with the realm of dreams (as in his Lost in Dream-novel and in the work for Coliseum Morpheuon-related products) and the odd, irrational logic which applies there. This can easily and perfectly be seen in this installment of Gossamer Worlds – when each character and locale not only resounds with literary quotations, but also with symbolic gravitas, we receive a rather interesting supplement full of entwined meanings, evocative connotations conjured forth by clever use of nomenclature and symbols. It’s also a nod towards one of the most influential, creative and complex myths in literature and I love it for that. So do yourself a favor, get this, use it, and if you have it, get your Norton Critical Edition Annotated Alice – with the latter, you can further amp up the already impressive content herein by at least a factor of threleven hundsand! My final verdict will clock in at 5 stars + seal of approval.