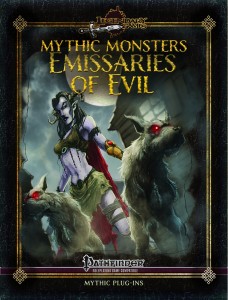 As always, we kick off this installment of the Mythic Monsters-series with a supplemental piece of content – which this time around turns out to be nothing less than an awesome, disturbing piece of prose – really liked this flavorful introduction!

After getting thus in the mood for all kinds of nastiness, we dive in head first with the CR 6/MR 2 Achaierai – flinging bites and nigh impenetrable legs enhance this creature in just the right way – so we’re off to a good start. And it does not become worse – or it does, at least from a PC’s point of view. The Ankou (CR 17/MR 7) now is a true force to be reckoned with – in the careful hands of a sadistic DM like yours truly these guys can be rendered nigh-unkillable, thanks to the awesome new shadow double-related trickery they can pull off. The build also utilizes two mythic variants of feats provided for your perusal. Indeed, that is a tendency, for the next creature, the CR 13/MR 5 Dorvae also utilizes such a feat. With an aura of psychic poison and grappling/poison-bite synergy, these beings receive an appropriate lethality upgrade over their non-mythic brethren.

One of my favorite creatures ever, the CR 8/MR 3 hellcat not only receives deadly telepathy to coordinate attacks, they also get a menacing purr – and yes, the imagery is glorious: What is worse than an invisible extraplanar predator seeking to tear you asunder? A group of them, always present and coordinating the attacks launched on the unsuspecting mortal fools…and always, there’s this purring. There’s a classic gothic novel/horror adventure just begging to be constructed around this creature.

Mythic Immortal Ichor (at CR 21/ MR 8) can squeeze through the tiniest of spots, cause acid damage and charm effects…oh, and it can use mythic power to actually friggin’ drown foes. NASTY!!! And yeah, their swarms are nastier as well. The Night Hag (CR 11/MR 4) can use mythic power to make the curse inflicted by her claws permanent and has infectious, carnivorous maggots in her mouth. Yeah! But that is NOT where these gals stop – beyond summoning mythic mounts (with synergy of exactly that installment of this very series), they actually can come back to haunt (and potentially kill!) you in your dreams, forcefully reincarnating into you, killing you in the process. And you thought Freddy was bad news…

Okay, at Cr 6/MR 2, the Shadow Mastiff is just one of what my group calls the “hellhound-wannabe-clan” – i.e. low CR, canine evil outsiders. Thankfully, the mastiff finally receives some distinct, unique tricks – namely shadowporting and becoming a cold-based incorporeal shadowy form – thank you for finally making these poor puppies stand out a bit! At CR 4/MR 1, the Yeth Hounds also belong to this club – and with the stunning, potentially madness-causing cursed critical, they also finally receive some tricks to make them stand out and not feel like “hell Hound minus fire, plus lame fear.”

At the same CR/MR, the Urdefhan with their suicide blasts and lethal swords can also be considered a well-made upgrade of the basic creature. The lowest end of the spectrum, CR and MR-wise, is provided for by the Vargouille at CR 3/MR 1 – which may now execute kisses via mythic power at range – nice idea and a kiss you definitely don’t want to catch! Another, even better example for great low level mythic monster upgrades would be the Soulshriver at the same rating – these guys can attack reflections to cause cha-damage, mirror hop, etc. – and a perfect candidate to show some overly cocky adventurers who’s the boss. A classic example of a creature, which now, even more so than before, can drive whole plots and cut down foes beyond its usual CR when played smart. Superb one!

At CR 15/MR 6, the mythic version of the shining child provides a nice example of a mythic upgrade that can be considered a numerical escalation, an increase in power and flexibility, but at the same time, I felt as though the awesome concept of the base-creature could have provided for some more disturbing abilities than those provided – yes, using mythic power for massive bonus damage is nice and all…but still. Then again, that may just be the fan of the creature speaking.

The original creature of this installment could have been taken, at least from the neat one-page artwork, right from the Fatal Frame/Project Zero-games. The CR 6/MR 2 Maldonado is the discorporate remnant of a fallen angel, forever depending on the bodies of mortals, whose faces it may change. And it IS deadly – I’ve never seen a build so consequently focused on possessing beings – from being able to perform the deed via multiple abilities, sans touch and with various action-types, these guys will be pretty hard to keep out…oh, and yes, it can force rerolls. It can also potentially bypass protection from evil and similar tricks. And its compelling, cool write-up and prose make what otherwise would be another possessing incorporeal creature a) distinct and b) awesome beyond the narrow mechanic focus on being the master-possessor.

This installment is the work of more than the core-team for the series, a quick glimpse at the author-line among the credits-lists reads like this: Jason Nelson, Alistair Rigg, Tom Philips, Mike Welham, Todd Stewart and Sean K. Reynolds. If you’re halfway familiar with designers, you won’t wonder anymore why this installment of the Mythic Monsters-series is literally all-killer, no filler. Even creatures I personally loathe in their original iterations have received a couple of cool tricks that set them distinctly apart from their mundane, lamer brethren. My special applause, though, is reserved for night hag and soul shriver – these two are so inspired, so infinitely cooler, I absolutely adore them – they are the stand-out beasts in an excellent installment that truly deserves the moniker “Legendary” – 5 stars + seal of approval.

You can get this stand-out supplement, even in this great product-line, here on OBS and here on d20pfsrd.com’s shop!