The Genius Guide to the Shadow Warrior

The Genius Guide to the Shadow Warrior 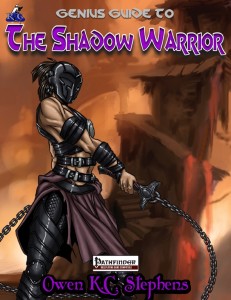 This pdf clocks in at 14 pages, 1 page front cover, 1 page editorial, 1 page SRD, leaving us with 11 pages of content, so let’s take a look, shall we?

Shadow Warriors are master of fighting with exotic weapons – beyond their proficiency in simple and martial weapons and light and medium armors and shields and in one exotic weapon of the shadow warrior’s choice. The class also receives weapon focus in said exotic death-dealing implement and at 2nd level and every level thereafter, the shadow warrior may select an additional exotic weapon to master – and weapon focus applies to these as well, allowing you to easily play a master of an arsenal of weird weapons. Speaking of bonus feats – at 3rd level and every 3 thereafter, the class receives one.

Now beyond these, the class receives d10, 4+Int skills per level, full BAB-progression and good ref and will-saves – not fort-saves. Unusual decision, but personally…I like it. Speaking of which – to represent the “shadow” component, fighting in darkness via Blind Fight and scaling sensory benefits that even end in seeing across planar boundaries to the coexisting Plane of Shadow as a part of the capstone. This affinity also translates into a scaling bonus to skills and initiative in dim illuminations.

Of course, this would be no Rogue Genius Games-class sans a copious amount of talents – the shadow warrior receives one at 2nd level and every 3 levels thereafter, but before I give you a brief overview of these, let me mention Dread Tactics – at 4th level, shadow warriors using weapons for which they have weapon focus (i.e. exotic weapons, most likely) deal additional damage that scales from +1d6 to +4d6. Now some shadow talents replace the effect of this damage-increase – a total of 15 such talents are provided and range from passive benefits like evasion to dread tactics dice DR, dread tactics dice as bonus to AoOs and skill checks as a kind of even better mobility, etc. Low-light vision and darkvision, adding damage when using a weapon matching the executed combat maneuver and better two-handed weapon fighting – solid array.

Improved stealth even in broad daylight and better skills in the dark – solid. Starting 10th level, the class receives kind of supernatural tricks -shadow style. The first is granted at 10th level, the second at 19th and they tend to scale either by ability or by ability-type. The shadow styles include calling forth shadow servants, attacking touch attack AC when completely concealed from the target greater invisibility and similar darkness-themed spell-like effects to a small array of proper low level spells, firing str-damaging bolts of shadow or conjuring forth blades of shadow. The capstone allows the shadow warrior to ethereal jaunt or plane shift a limited amount of times per day.

Extensive advice for using these guys in one’s game is provided, as are two archetypes – the deathstalker, who replaces the shadow warrior’s bonus feats with a limited selection of inquisitions and receives a very limited array of death/necromancy/repose-themed spells of up to 4th level in lieu of dread tactics. The second archetype, the shadowsinger, receives more skills and can conjure forth the shadow of a perished skald to deliver bardic style performances – at the cost of all shadow talents – think of this one essentially as the shadow bard, as dread tactics are postponed to 14th level in favor of more bardic themed options.

Editing and formatting are very good, I noticed no significant glitches. Layout adheres to Rogue Genius Games’ two-column full-color standard and the pdf comes fully bookmarked and hyperlinked for your convenience. The pdf comes with thematically-fitting stock-art apart from the cover, though this time around the particular artworks have been used in a lot of 3pp publications. That does not make them bad, I just felt obliged to mention that.

Owen K.C. Stephens delivers an interesting take on the master of exotic weapons and his trademark genius does shine within these pages – the mechanics to make the exotic weapon focus work is awesome and tying mechanics to dread tactics makes for one damn cool design approach. I also enjoy the move away from the full-BAB-fort-save combination and the sample characters I made, went over well and efficient. But it felt like it was missing something. After some careful deliberation, I realized what that was – the class has all those cool design-decisions and then doesn’t make that much of them – the respective talents more often than not come over as rather conservative, which is by no means a bad thing – but in a class that has these cool, intricate parts that could be tied closer together, they feel a bit like they belonged to a less inspired version of the class.

Now this will read more harsh on paper than it is intended, so I apologize in advance – but this class to me felt half experimental (in the best way), awesome, cool…and half bland. Now don’t get me wrong, I *do* like many components here and I *love* what has been done with exotic weapons and dread tactics, but the class does feel a bit like it went half way, then opted for a more conservative, less awesome rest of material. This reads very much like two completely different design-philosophies had been blended and the result is slightly less than it could have been.

A capable DM willing to design additional talents will have a field day here, but those unwilling to add to the selections may make the class feel restricted – the 2 okay, but not particularly inspired multiclass-ish archetypes just don’t fill the void that these cool design options have left open, especially since they take away/cripple the most iconic features of the class. Another oversight in my book would be the lack of synergy with the shadow assassin class, which could have yielded some damn cool combinations – focus/dread tactics? Yeah! What about allowing these guys to switch around weapon qualities? The ideas are lurking beneath the lines, but I can’t rate the potential – which is exceedingly high. Hence, I can only settle on a final verdict of 4 stars. If you want to tinker with this, design yourself or don’t mind more conservative designs that do not realize their full awesome potential, be sure to pick this up right now – for you, this scores even higher.

You can get this neat class here on OBS and here on d20pfsrd.com’s shop!