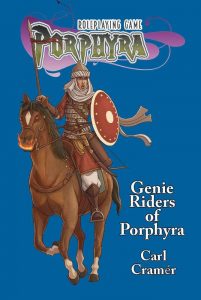 The genie rider class gets d10 HD, 4 + Int skills per level, full BAB-progression, good Fort-saves, and proficiency with simple and martial weapons as well as all armors and shields, excluding tower shields.

The class also comes with a so-called genie mount, which begins play with 1 bonus trick and increases these to up to 7 over the course of the class progression. Nitpick here – the write-up of bonus tricks erroneously references the druid class instead of the genie rider class in an obvious cut-copy-paste glitch. The mount gets full BAB-progression and good Fort- and Ref-saves; starting at third level, it gets a +2 natural AC bonus, and increases this to up to +12 in increments of +2. Also at third level, we have a +1 increase to both Strength and Dexterity, which also increases in increments of 3 levels to up to +6. Additionally, 4th level and every 4 thereafter net a +2 ability score increase. The mount begins with 1 skill, and starts play with a feat and increases that to a total of 10 feats over the course of the 20 levels of progression.

The mount may be handled as a free action, and the rider gets +4 circumstance bonus regarding her mount, courtesy of evasion. 3rd level nets evasion, 15th level improved evasion, and 6th level provides Devotion, +4 to saves vs. mind-affecting spells and effects. 9th level nets Multiattack. The table of the mount is flipped 90°, which while understandable, can be slightly awkward when using this on a non-phone screen – not a major complaint, mind you, as most folks using this electronically will indubitably do so on phones, tablets, etc. The pdf comes with 6 mount choices: Camel, lion, horse, mawgriff, pony and wolf, with Medium genie riders restricted to horse/camel and the other options being exclusives for Small genie riders. Genie riders do not take armor check penalty when riding their mount, and the mounts are considered to be combat trained and start play with Armor Training. Minor nitpick: The pdf doesn’t mention anything regarding the means to replenish mounts after one has fallen in battle.

Genie riders begin play with the camaraderie ability, which allows the rider to use aid another to help allies within 30 feet, and the bonus granted increases by 1. Both 7th and 14th level provide a further +1 increase to the bonus. The class begins with the challenge ability: 1/day, activated as a swift action, and the bonus damage caused is equal to the genie rider’s level. The ability gets an additional daily use at 4th level and every 3 levels thereafter. At 12th level, challenges also penalize the AC of the challenge target versus attacks from other foes.

At 2nd level, a genie rider damaging a target prevents that target from providing a flanking for 1 round. 3rd level nets controlled charge, which increases the attack bonus granted by charging and negates the AC lost when charging. 5th level nets ½ class level thunderous charges per day as a full-round action. This works as a charge, and the end point of the charge is rocked, with nearby targets risking falling prone, and the option to exclude targets at higher levels. The radius of these quakes increases at higher levels as well. 9th level nets the mount the trample universal monster ability, but this does require, as a nice balancing tool, being properly commanded – at least until 18th level, where this restriction is lost, and damage further increases.

6th level provides symbol of courage, which means immunity to fear for mount and rider, and an aura that nets nearby allies a bonus to saves vs. fear effects.  13th level nets the ability to inspire allies as a move action, which nets all allies within 60 feet the rider’s Charisma bonus as a bonus to attack and damage rolls with weapons for one round (so not mount buff). This may be used 3/day, plus 1/day for every level beyond 13th and the effect is properly codified. 15th level nets “All Eyes On Me”, a supernatural ability usable 3/day as a swift action. Each foe within 30 ft. must succeed on a Will-save or become flat-footed and suffer a -2 penalty to AC against attacks from the rider’s allies.

At 4th level and every 4 levels thereafter, the genie rider’s mount receives a genie tribe’s blessing, chosen from a list of 5. This means, ultimately, that all genie riders at 20th level will have all of the blessing benefits, which is a bit of a bummer. Djinni blessing enhances speed and later nets feather falk/air walk. Efreeti nets fire resistance and fire bonus damage; the blessing of the janni enhances saves and allows the mount to alter/disguise self at will, culminating in rerolls at 20th level. Marid’s Blessing helps retain concentration and allows for better Stealth, Ref-saves and swim speed/water breathing at higher levels. Finally, the shaitan’s blessing negates penalties incurred from armor, DR, an improved devotion and the ability to carry more.

The pdf concludes with a sample zendiqi genie rider, including mount stats and a brief story.

Editing and formatting are very good on a rules language level, and apart from minor cosmetic snafus, I noticed no issues on a formal level either. Kudos! Layout adheres to a 1-column b/w-standard with purple highlights, and the artwork on the cover is nice. The pdf comes fully bookmarked, which is a nice plus.

Carl Cramér’s genie rider is basically a variant cavalier, for better or worse. It doesn’t address the linearity of the class that inspired it, and replaces the one choice we had, order…with nothing. The supplemental abilities are nice – the quaking angle? Heck yeah! Why don’t we have abilities for unique attacks, depending on genie blessings? Indeed, further enhancing the meaningfulness of genie blessing would be a huge step to make this class more compelling. Smoke charges, drowning attacks, aerial acrobatics – the awesome concept has its work cut out for it, but as presented, this does not capitalize on the cool idea, at least not to the extent that it imho should. All in all, if you’re looking for an Arabian nights-style cavalier variant, this is certainly worth getting for the low asking price. My final verdict will be 3.5 stars, but I can’t round up for this fellow.

You can find the Porphyra RPG here!