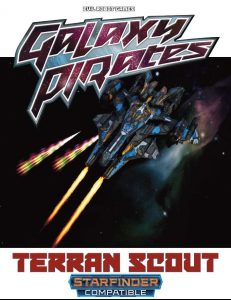 This installment of the Galaxy Pirates series of Ship-supplements clocks in at 10 pages, 1 page front cover, 1 page editorial/SRD, leaving us with 8 pages of content, so let’s take a look!

The tier 1 ship is armed with linked gyrolasers on the front, and is powered by a pulse brown power core. With signal basic drift/hyperdrive, and basic medium-range sensors as well as a basic computer, it has a pretty normal loadout that is enhanced by the thrusters. The ship has S10 thrusters, a crew of 5 and mk 3 armor and mk 3 defenses, as well as evenly-distributed basic 40 shields and a good maneuverability. Upon reverse-engineering the ship, I arrived at a very efficient build that makes use of all build points, as well as almost all of the power core units. Nice!

The tier 2 iteration shares some characteristics with the tier 1 version, but very much is its own ship – we also have basic 40 shields that are evenly distributed, S10 thrusters, signal basic hyperdrive/drift basic computer and basic medium-range sensors as well as mk 3 defenses. However, the ship has a pulse gray power core, and uses it well – we have an upgrade to mk 4 armor here, and the expansion bays are not simply cargo holds – instead, we have escape pods and a trivid den recreation area. Additionally, the crew has a better time, with quarters upgraded to good quarters. Additionally, the advanced scout has a turret featuring a coilgun in addition to the fire-linked gyrolasers. Once more, the ship manages to be exceedingly efficient in its design, making full use of the 75 build points it has, as well as almost using all power core units

Much to my pleasure, the ship’s maps (2 provided) not only show the rooms, but also the ship itself, making it clear where the rooms are. You can btw. see the computers and steering devices here – awesome! Speaking of awesome: We get two massive one-page artworks that depict these kickass ships – one from the front, and one from the back. I absolutely love this! A page of paper mini-like stand-ins is included, and the supplement also follows the tradition of the series, in that it does offer fully filled out ship-sheets for both ships provided. Nice touch that I should also point out – make/ model/class  are also noted on these sheets. It’s a small thing, but I felt that I should for once point this out.

Editing and formatting are very good on a formal and rules language level – I noticed no snafus. Layout adheres to the series’ two-column full-color standard, and the artworks of the ship, as well as the cartography, both presented in full color, are absolutely stunning. The pdf has no bookmarks, but needs none at this length.

Paul Fields and Jim Milligan deliver an excellent array of ships here – well-built, cool and absolutely gorgeous, I adored both of the ships. The great supplemental material further adds to this, making my final verdict 5 stars + seal of approval. An excellent, cool ship-pdf.

You can get these cool scout ships here on OBS!

You can directly support one of the authors here on patreon!