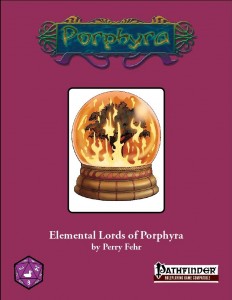 This supplement is 21 pages long, 1 page front cover and combined editorial/SRD, though on different pages, constitute together about 1 page, so we actually get approximately 19 pages of content – quite a bunch, so let’s take a look!

Elemental lords? Yes – these powerful beings tend to get the short end of the stick when compared to archdevils, gods etc. – and in Porphyra, they are exceedingly important. You see, the patchwork planet was once the domain of the elemental lords before the arrival of the gods from throughout the planes and the resulting NewGod wars. Somewhat analogue to the legendary Scarred Lands (though more extreme in several cases), the elemental lords thus represent the olden beliefs and still have a lot of worshippers that aren’t necessarily on good terms with the extensive pantheon of this planet. Whether they are gone for good or resurgent, though…only time will tell.

We are introduced to no less than 12 elemental lords herein and I honestly expected rehashes of tried and true tropes. Let’s make that clear from the get-go: I was wrong. We get write-ups for domains/subdomains, favored weapons/animals, unique spell preparation rituals and 2 religion traits per lord/lady. But let me give you an example: Ashamar Shining, the Lady of Aish, the Glass Queen, cruel and beautiful as a searing ember’s flow cherishes the fragility of beauty, while her scorn and malice cut as deep as the splinters that are part and result of her beauty. As patron of glass-workers, her divine assassins kill with poisoned glass. It should also be mentioned that the religion traits provided represent maxims of the teaching of the respective lord/lady, adding yet another dimension to the vivid prose of the supplement.

From the Ice Tyrant to the master of vines and grapes, the elemental lords make for harsh masters and mistresses and generally, they surprisingly uniformly transcend the lame old clichés – take for example Kurofu, the Shadow, master of Oni, samsaran and tengu – Dark wings, dark words indeed.

Najim, the hidden god, born from the dark tapestry, sought to crash his body/moon into the world, now lying hidden beneath Purple Duck Games’ super-dungeon-series Purple Mountain, allowing us a glimpse of the possible things to come and offering yet another highly uncommon take on what one would expect from an elemental lord. Have I mentioned Poison Wave? The empress of naga?

We also are introduced to 3 new subdomains with the oni, naga and retaliation subdomains. While the wording of these could be slightly more precise, the respective abilities are concise enough to prevent misunderstandings. We also get 12 new magic items, one allowing you to positively influence targets as if via diplomacy (sans save…). Another would be the ashglobe – a combined holy symbol with a SL and a means of adding a metamagic effect to a specific spell. Rather nice.

Finally, we get 12 new spells that are exclusive for the respective lords and ladies. levitating massive amounts of weight (flying castles!), ice-only minor earthquakes, detecting gems – the spells are mostly okay regarding their wording, if not always perfect. They work best when taking iconic concepts like creating a flying carpet made of FIRE or amplifying penalizing properties of light exposure in a small area.

Editing and formatting aren’t in any way bad, but the wordings, especially in the crunchy sections could use a tad bit more precision. While not falling into the bad category, some refinement in this area could have made this pdf shine even more. Layout adheres to a beautiful two-column full-color standard with awesome holy symbol-style artworks for all the symbols of the lords and ladies. The pdf comes fully bookmarked for your convenience.

Perry Fehr is one of the authors I never know what to expect of – he has written some of the best modules I’ve read, some cool crunchy pdfs…and some not so great ones. In part, one of his tendencies seems to be to allow for ambiguities in crunch – a tendency that, while not completely absent, is by far not that pronounced here.

Perry Fehr is also a gifted weaver of words and his strengths come triumphantly to the fore herein – imaginative and unique, the elemental lords herein are thoroughly compelling beings, with intriguing backgrounds and awesome tenets – the write-ups of these beings, which constitutes the majority of this book, is completely and utterly AWESOME. To the point, where I actually want to know more about churches, planet, cosmology… and that, ladies and gentlemen, is the hallmark of great prose.

While the supplemental rules aren’t necessarily flawed, they could have used some polish, though that should not deter you from taking a look here. If elemental lords with PERSONALITY beyond “I am fire guy” interest you, then this ought to be a must-purchase recommendation due to the ridiculously low, fair price-point. My final verdict will hence clock in at 4.5 stars, rounded up to 5 UNLESS you get this primarily for the crunch; Then round down instead, though I think the truly inspired fluff will adequately spark your imagination.

Worship the elemental lords and delve into their dark lore here on OBS and here on d20pfsrd.com’s shop!