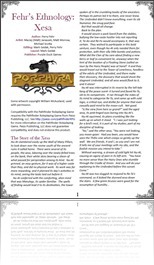 This installment of the Fehr’s Ethnology-series from Purple Duck Games is 12 pages long with about 3 pages being used for editorial, SRD and advertisement, leaving thus about 9 pages of content, so let’s check this out!

As has become the tradition of the series, this installment kicks off with IC-prose before getting into the racial traits: Xesa get +4 to Int, -2 to Wis and Str, are plant-like humanoids (can be affected as plants and humanoids, bur are immune to paralysis, polymorph and poison), are medium-sized, slow, get low-light vision, get +50% damage from cold effects, don’t generate any scent, can duplicate eagle’s splendour and sanctuary 1/day via pheromones and use continually speak with plants.

Spawned from men that got addicted to the pheromones of a carnivorous magic plant, the Xesa have evolved into a strange hybrid people: They have a dividing line at which they break asunder to become new entities and then there are the undivided – a ruling-class sans the means to reproduce. In spite of this peculiarity, age, height and weight tables and explaining notes make it rather simple to grasp the way the race works.

The race also comes with 4 well-balanced race traits and 6 alternate racial traits that enable you to become a cultist of sun or kmoon (including spell-like abilities), focus more on arcane glyphs rather than plants or even belong to the ruling caste of undivided. The pdf also provides 4 racial feats, enabling Xesa to draw HP from sunlight (but sickening you for a short time), use plants to enhance your bardic performance and two feats that help one survive (skill-bonuses) and gain bonuses to knowledge.

A discussion of all classes (CORE, APG, UM, UC + PDG’s Rook) and the Xesa’s take on them (mini-hooks) are provided before we get the supplemental material for Xesa Druids in a reprint of the plant bond ability of the Treesinger as well 4 plant “animal”-companions: Carnivorous flowers, crawling vines, puffballs (Floating fungi, baby!) and sapling treants.

The pdf also provides favoured class alternatives for alchemist, druid, fighter, magus, ranger, witch and wizard. Also included in the deal is Po-Ta, a Xesa witch and 3 new spells: One to make animals mad, one that makes gear more vulnerable and a spell that may let one seem undead with regards to detect spells – cool to finally see a low-level counter-measure for the annoying detect undead spell.

Editing and formatting are top-notch, I didn’t notice any glitches. Layout adheres to PDG’s 2-column standard and the one piece of artwork, a full page showing off a Xesa is mind-boggling in its disturbing beauty and something I definitely wouldn’t have expected to see at that low of a price-point. The pdf comes with full nested bookmarks. When I saw the Xesa attribute modifiers and immunities I groaned. Seriously. I thought: Oh now, a race geared towards power-gaming in a specific direction, certainly much more powerful that other races. Well, turns out that the Xesa are actually neatly balanced – slow speed, vulnerability to either cold or fire and the ability to be hit by both plant and humanoid spells offset the bonuses they receive in a precarious balance. Add to that the fact that the none of the supplemental material felt unbalancing to me and we get a race that is geared towards the thinking classes and comes with a very strong feeling of alien creepiness. Due to the balancing being solid and me enjoying the race and its uncommon premise and execution, I’ll settle for a final verdict of 5 stars.

Fehr’s Ethnology: Xesa is available from: