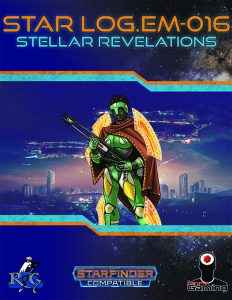 This expansion for the Solarian-class clocks in at 6 pages, 1 page front cover, 1 page editorial, 1.5 pages of SRD, leaving us with 2.5 pages of content, so let’s take a look!

After the introduction, which also discusses the dualistic nature of the class, we move straight into the new stellar revelations of the class, with graviton and pulsar revelations both sporting a “G” or “P” to denote their respective type. We begin with 2nd level, where 3 revelations are provided, 2 of which are proton revelations: Proton blast lets you fire plasma as a laser small arm, with an item level no greater than one below your solarian level. This cannot have autofire, does not require charges, and inflicts E& F damage. Solar weapon and manifestation apply their benefits to this blast. Proton lash acts similarly, using a taclash as a basis, using Charisma bonus instead of Strength bonus, with the tweaks otherwise being similar. The Graviton defender revelation, alas, is slightly wonky: Whenever an ally within 60 ft. of you makes an attack, you can use your reaction to divert the attack, making it behave as covering fire sans requiring an attack roll, with the penalty being -2 or Charisma modifier, whichever is higher. Covering fire, as per SFRPG, requires that you designate a selected ally, something that this ability does not mention; I assume that the affected ally is the one whose attack you diverted.

At 6th level, 3 new revelations are provided as well: The plasma flare proton revelation makes it possible for enemies hit with plasma weapons while in proton mode to get the burning condition on a failed save,a s you tap into solar armor’s power, which acts as a prerequisite. One of the two graviton revelations also requires solar armor: Graviton impact allows you, while attuned to graviton mode and taking a full attack, attack or charge t spend 1 Resolve Point. If you do, the next time you hit a target before the start of your next turn, you may use a free sunder attempt versus that enemy’s weaponry or armor, using attack roll as the combat maneuver, applying all usual bonuses. When fully attuned, you add the penetrating special weapon quality. The second graviton revelation lets you, as a standard action, target a foe within 30 ft., who must succeed a Fort-save or suffer temporarily as though carrying additional bulk. When fully attuned, you also impose a penalty based on Charisma to determine the amount of bulk the target can carry thus.

The pdf also sports two 10th level revelations. Graviton fluctuations lets you, when in graviton mode and using defy gravity to gain a fly speed, leave fluctuations in your wake that may render targets off-kilter on a failed save, with 12th level allowing for the extension of durations. Damn cool! Nitpick: The ability does not specify that it requires defy gravity, which it probably should. The proton burst revelation builds on the proton blast/lash or solarian weapon: When making a single attack with these as a standard action, you can adopt proton mode until the start of your next turn. You may choose explosion or line mode, adding explode (5 ft.) for melee (should probably note “melee” explicitly, even though that aspect is evident from context), acting as a grenade at range. In line mode, proton burst counts as having the unwieldy and line properties, but no benefits for the other options are provided here.

The pdf closes with a nice section that talks about solarians in the Xa-Osoro system.

Editing and formatting are very good on a formal level. On a rules-language level, there were a few minor nitpicks for me to note. Layout adheres to the 2-column full-color standard of the series, and the pdf has a nice artwork. The pdf has no bookmarks, but needs none at this length.

The solarian is one of the most interesting classes in SFRPG, and easily one aspects of the game that sets it apart from other Scifi games. I really enjoy the flavor and ideas inherent in the Solarian options, and the mode-based playstyle is intriguing. The added options presented here allow for some intriguing tweaks to the chassis and generally are components that I enjoy. However, at the same time, the rules are a tad bit less refined than what I’m accustomed to see from Alexander Augunas, and at this length, minor flaws weigh heavier than in larger files. If you can look past aforementioned nitpicks, then consider this to be worth rounding up; as a reviewer, I can’t round up from my final verdict of 3.5 stars.