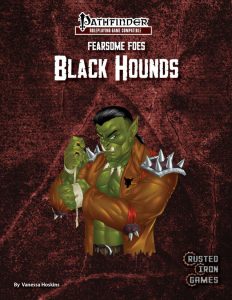 The story of the Black Hounds begins with Belik Hammerfist, born to loving half-orc parents, and subsequently orphaned at the tender age of 7 in peacekeeping riots that, including arcane police fireballing buildings, seems surprisingly topical when thinking about the world in general. Anyway, this incident did spawn a massive riot that burned half the city down, but Bellik? He survived the next 10 years on the streets, going through the school of hard knocks, if you will. With his renown growing, he struck a deal with the local magic shop proprietor Audrey Vim – she’d be the grey eminence, he’d be the face of the new mercenary outfit. And thus, the Black Hounds were born – a mercenary company not concerned with the ethics of their employers, with one exception – no killing if possible, even when a reward of securing  target dead is worth just as much as a target that’s alive.

The narrative was surprisingly compelling here, and this extends to the adventure hooks, which are MUCH more detailed than usual – and more interesting. They do contain rules-relevant components, including DCs, and some can be considered to be closer to adventure outlines than simple hooks. The Black Hounds themselves are not simply background flavor – instead, they are depicted as a full-blown organization, including a logo, notes on good and challenging classes, headquarters, and resources! Yep, full-blown organization rules! For 1 TPA, you can e.g. get a tattoo or brand that nets you a +2 circumstance bonus to Diplomacy with other Black Hounds members. Discounts, retraining, hired specialists, merciful (not italicized properly) weapons at a discount and more – huge kudos here!

The pdf, obviously, also contains stats – the rank-and file member is a level 6 bounty hunter slayer (including bolas etc.!), and Ms. Vim? She is a capable occultist, with focus allocated etc. – minor nitpick: Spell-references in her tactics are not italicized. Belik himself is a capable barbarian/slayer multiclass, and surprisingly not as straight-forward a build as I expected. The pdf also provides prefabricated encounter-information, with individual teams for CRs ranging from 5 to 11. Cool here: One of these ties in with the adventure hooks, namely Audrey’s vindictive ex-girlfriend – the stats of that lady and her bodyguard are from the NPC Codex, but personally? Loved this extra touch.

Editing and formatting are very good on a rules-language level, and almost as good on a formal level. Layout adheres to the series’ two-column full-color standard, with multiple full-color artworks – one for the named NPCs each, and one for the rank and file bounty hunter. The pdf comes fully bookmarked for your convenience.

Vanessa Hoskins is a trooper of a designer, and she knows how to write compelling characters. The concept of the Black Hounds should not elicit as much excitement from me as it does; the angle of the professional “bring ‘em back alive”-group is not new; and yet, its implementation made me smile time and again; it’s the little tidbits that render this compelling, both mechanically and from a narrative point of view: The “loving” parents, the tragedy, the inclusion of organization information, the Ex-girlfriend-angle – this feels like a book the designer obviously CARED about. Considering this and the low price-point, my final verdict will be 4.5 stars, rounded up.

You can get this handy little organization here on OBS!

If you value my contribution to the community, please consider leaving a donation, or joining my patreon.