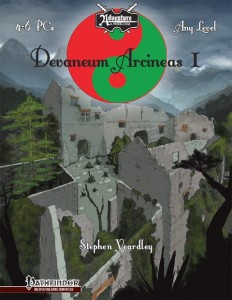 The third part of the “Dire, Devilish Deeds”-saga clocks in at 41 pages, 1 page front cover, 1 page editorial, 1 page ToC, 1 page SRD, 1 page back cover, leaving us with 36 pages of content, so let’s take a look, shall we?

Still here? All right! At this point, I do assume you are familiar with the premise of this series of modules – if not, please consult my review of the first 2 books. Now the second installment saw the PCs vanquish (hopefully) the first gauntlet of challenges and thus, if the inversion of the eponymous titles was not ample clue, this time around, we enter the second gauntlet. Now this warrants some explanation -this series could actually be considered a 2-part series in my book: Dire, Devilish Deeds I and II (collectively the Arcineum Devaneas-parts) covered the first gauntlet, III and IV (collectively the Devaneum Arcineas-parts) cover the second. Now, as before, the puzzles and challenges can definitely be scavenged from the books, should you choose to – but you could also easily run just one gauntlet – imho both halves can stand on their own without the second gauntlet. And indeed, the module does sport an introduction similar to the one sported in the first module of the series, thus allowing for the second gauntlet to stand alone – e.g. the tree of the worlds has been replaced by the cave of the worlds – we get essentially a kind of reskin of the intro..

The sorceror’s gauntlet, which the PCs are about to enter, is obviously not a labyrinthine forest and instead takes the shape of a dungeon, which, of course, comes with a full-color map and a player-friendly version, though, as far as AAW Games-maps are concerned, this one is nothing special -it does its job, but do not expect something mind-boggling.

All right, so the premise is similar to the first gauntlet – each test herein provides first a puzzle with visual representations (including the solutions) before providing a combat challenge that can be likened to a puzzle itself, for the PCs are transformed stat-wise into creatures (apart from Intelligence and the option to communicate) – percentile HP are carried over between forms, which still require the somewhat clunky math to determine properly. Additionally, each of the combat challenges nets one letter that, collectively, makes up the final puzzle of the gauntlet.

The first puzzle already is pretty much different from the first two installments – we receive a grid with a blue and a red warrior on it, the blue representing water, the red fire. The players receive tokens that represent fire, water, earth and air-warriors – the goal, then, is to place as many warriors of non-identical elements on the board as possible – straight lines drawn through the warriors of the elements should yield no more than two warriors fighting one another, essentially avoiding a “flanking” position. Combat-wise, the PCs are transformed into celestial fire beetles that have to square off against dire rats, showing another difference – this time around, the PCs take the forms on magical creatures in their transformed shapes. If the puzzle above wasn’t ample clue – in a subtle way, the puzzles of this second half of the series have a different style, working less via intuition and being based more on logic – nice to see such an example of indirect storytelling and differentiation.

Challenge number two also works this way, with an archway requiring the PCs to decipher a sentence, wheel of fortune-style (sans wheel) -perhaps it’s the language-nerd, but yes, I considered this puzzle exceedingly easy. The combat challenge here would be an example wherein imho, the sorcerous creatures the PCs turn into aren’t perfectly chosen – pitting celestial giant bees vs. dire bats does not feel that iconic as “arcane vs. natural” as I would have liked.

Okay, the third puzzle is kind of awesome – plates of a lot of strange combinations of arrows, plusses and the like need to be deciphered, with some symbol-combinations actually amounting to different letters. It’s pretty much a nice glyph-deciphering puzzle here. The combat challenge, once again pits celestial animal PCs, here, dire badgers, against dire weasels. My previous criticism remains – celestial animals do not make interesting magical creatures for me, when there are so many intriguing options.

After this, we have a glorious puzzle – set within the earth, we can perceive a cross of massive emeralds – the task here is one of logical thinking and visual, geographic capacity – determine the amount of squares hidden in the shape of the emerald cross – neato! The combat challenge pits celestial lions versus dire boars.

Editing and formatting are very good, I noticed no significant glitches. Layout adheres to a beautiful 2-column full-color standard. The full-color artwork is neat indeed and the map of the gauntlet is also provided as a player-friendly version. The puzzles and solutions come in handy full-color and can easily be printed out.

Okay, so this one has me somewhat torn regarding direct comparison to its predecessors – it obviously inherits the necessity to tackle Stephen Yeardley’s saga on its own ground. So no change there. What I adore, though, would be the change in focus of the puzzles – somewhat away from intuition towards puzzles that are more logical and thus, feel more arcane, at least to me. The puzzles itself, universally, surpassed the predecessors for me – I really loved these. At the same time, though, the choices of which creatures the PCs transform into felt mind-boggling to me – with so many awesome magical, arcane creatures, which choose the blandest of the bland, celestial animals? Seriously, that’s just not awesome. Why not use archons, outsiders, etc. and provide some more unique set-ups for puzzle-combats? Instead, the celestial animal vs. animal dichotomy, at least to me, felt blander than in the previous installments, which saw animals and elemental creatures challenge fiendish creatures and devils. To me, these pairings do fall woefully short of the premise of “arcane” vs. “nature”, especially when compared to the first two installments. That being said, this is still a superb and innovative module, but one that falls behind the previous installments in combat diversity, while upping the ante regarding the execution of the puzzles.

How to rate this, then? Well, obviously, I love this saga – if you’ve read my first two reviews of the modules in this line, you know how much I adore the unique premise and challenges of this series. This same love extends to this pdf, but it is a love with more trepidation than before – while the puzzles render this installment in this regard my favorite one in the series, the combat challenges fall far behind regarding my enjoyment of them. In the end, this made this installment somewhat less superb for me. Also, as mentioned above, unless you only wish to scavenge content, you need Part IV, for this is only half of the gauntlet, though this, at least, will not influence my final verdict.

My final verdict will, in the end, clock in at 4.5 stars, rounded down to 4 – still, if you like the premise and enjoy the saga’s great puzzles, this should be considered a must-buy.

You can get this cool, innovative puzzle-gauntlet here on OBS!