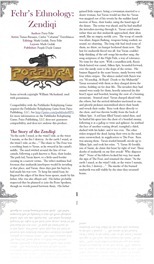 This installment of the Fehr’s Ethnology-series from Purple Duck Games is 11 pages long, 1 page SRD, 1 page advertisement and combined logo/editorial/etc 1/2 a page, leaving us with approximately 8.5 pages of content, so let’s check these out!

The Zendiqi, as becomes readily apparent from the short, aptly-written fluffy introduction, are a sub-breed of humans influenced by their very distinct culture: The Zendiqi were actually the native population of the now-patchwork-world Porphyra before the NewGod-war that forever changed the setting. Culturally, they are atheists worshipping the elemental forces and fighting against the agents of the divine ad the incursions of the humanoids that have invaded and conquered and forever changed their lands.

Zendiqi get + 2 to an ability-score of their choice, + 1 to atk vs. gnomes and dwarves, +4 on con-checks and fort-saves to avoid fatigue, exhaustion and ill effects from environments, running, forced marches, starvation and thirst, +2 to AC and grapple checks vs. divine spellcasters, can detect the auras of divine spellcasters as per detect evil/good/law/chaos, +2 to saves vs. divine spells and apply -2 per character level to healing gained by positive or negative energy and gain resistance 5 against a chosen element. The race comes with full age, height and weight tables and 4 race traits for improved bone weapon handling, camel-riding, +1 to confirm crits and damage on crits and access to knowledge religion as a class skill and +1 to it. They also get 6 different alternate racial characteristics to make Zendiqi abandon their philosophy, a trait that helps sorcerers of specific bloodlines, +1 to disable device check and knowledge (engineering)-check, traits that allow the Zendiqi to focus their racial hatred towards elves or green-skins instead of the short folk as well as a characteristic that allows for more accepting Zendiqi that seek a path of acceptance.

There also are new feats for Zendiqi: One that allows the race to improve its resistance against elements, one that gets rid of bone-weapon drawbacks and improves intimidation, a feat for a devastating mounted charge, a dervish-feat that lets you add dex-mod to atk and damage when 1-hand-wielding scimitars, more resistance vs. the desert and the ability to heal yourself via godless meditation techniques. The feats also include a 3-feat mini-feat tree based on the sidewinder style feat, which increases the reach of your 5-foot-step to 10 feet and allow the practitioner to kick up dirt and sand to get +1 to AC and impose -1 to hit on opponents. The style also grants 1/2 class-level to bluff and improves your feinting capabilities and finally also dealing 1 point of dex-damage vs. feinted opponents.

After these rules, we are introduced to the race’s take on the respective classes, favoured class options for alchemists, barbarians, cavaliers, fighters, sorcerers and wizards as well as two new class options: The wildblooded Malahna Bloodline, that changed the elemental sorcerer bloodline by replacing elemental resistance and allows the sorcerer to emit rays that damage aura-bearing characters and heals non-aura-bearing casters. There also is a new cavalier-order herein, the order of the Sirocco, which represents the camel-riding elite chargers of the Zendiqi.

We also get a sample level 1 fighter.

Editing and formatting are very good, I didn’t notice any significant glitches. Layout adheres to a 2-column standard that is generally printer-friendly and the 1-page artwork of the Zendiqi is awesome. The pdf is fully bookmarked with nested bookmarks. The fluff, the abilities, the well-balanced unique racial feats – while entwined with the background of Porphyra, are simply awesome and could easily be transported to other settings. let me spell it out: The unique culture of the Zendiqi hinted at in this book actually makes me SO want to include these interesting xenophobic beings with their ideologies and struggles into my game and that is something that only very rarely happens. Balancing between being easy to insert and unique, this is one of the very best installments of the series so far and gains my full recommendation at 5 stars + seal of approval.

Fehr’s Ethnology: Zendiqi is available from: