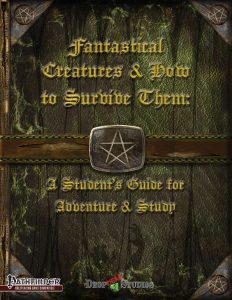 We begin this supplement, true to its premise, with an in-character introduction – this book is very much crafted as a kind of field notebook of creatures, with prose featured as a framing device and Winterlynn Graysun, graduate of Windfell Academy, as the narrative voice framing the content herein.

Which brings me to something to bear in mind: This bestiary is actually included in the massive “Wizard’s Academy”-adventure, also released by Drop Dead Studios. If you want to get the adventure, skip this book – its contents are included in the module! This stand-alone file is provided, properly designated, for all those of you who are interested in these critters, but not the adventure.

Now the next thing you need to know is that this bestiary makes ample use of the Spheres of Power-rules. While usable without them in a somewhat restricted manner, to get all out of this, you need that book. D’unh. I know. It’s like saying “Beware, the psionics bestiary requires psionics!” – Still, if I don’t say such things in the preface, someone is bound to complain.

All right, that out of the way, the creatures herein range, CR-wise, from a lowly CR 1/4 all the way up to an impressive CR 25, with particularly the higher levels sporting quite a few nasty adversaries – due to the adventure being highly modular and the bosses…well being plentiful.

But let us get back to the matter at hand, namely the framing device of the narrator, which does a rather nice job at rendering this book a better read than you’d honestly expect it to be – it does not read like simple a massive collection of stats, which, to me, is a big plus. The first array of creatures herein deals with the wonderfully twisted abominations, failed, dangerous experiments of the academy’s experiments: In this section, we find the mighty, alteration-sphere using dragon horror, which can use it to grant itself lethal enhancements to its already potent physical attacks.

Abominations are indeed interesting creatures – horror #9, for example, is significantly more tactical than you’d expect – it can eat foes, sure – but it is immune to two of the physical damage types: Damage from one of these types causes it to split! And yes, we actually do get stats for the smaller, split versions. I really like this callback to old-school gaming and splitting foes. Horror #17, a plant-like golem-thing with access to both plant and dark spheres makes for another dangerous foe…but it pales before…Mr. Mouth!

Perfect example of “wizards doing horrible things”, it is a mindless, ever-hungry thing of mouths, an aberrant, lunging, roughly humanoid mouth-thing. In spite of the sketch-like artwork…this thing is seriously creepy! On the celestial side, we are introduced to the avenger archon in various statblock iterations as well as the choir and herald angel variant with their potent sound-abilities. The virtuous, caring counterpart to the succubae, the caring primary also makes for an angel that seriously should probably have been made much sooner – and the wife of Gideon makes for a cool high-level variant of said being. Speaking of angels – yep, there is a version of the solar here. Yes, he will END you.

While we’re at the subject of “end” – the book does cover a nice version of the psychopomp and adds some seriously nice lore via the meta-narrative here. Did you know that it makes a difference if they come with hoods raised or lowered? From here, we move towards the construct chapter, where we are introduced to the colossus subtype, which is defined, among others, by being REALLY BIG…and by having an elemental soul. No less than three variants of Mark I are provided (CR 7, 10 and 15), while the smaller, spider-like Mark II can alter its physical composition…and then there is Mark V. CR 24, dubbed “God-killer” it has cannon-fingers, is very, very strong…and outside of combat it brews a mean cup of tea and is fond of riddles…yeah. Did not see that coming, did you? I told you the pdf’s creatures gain a lot by the well-written prose!

There also are cyborgs, though these do not use the Technology Guide rules, instead using the spheres system to represent their abilities. The book also contains a selection of synthetic lifeforms. Experimental golems made of shadow, telekinetic force or raw magic can also be found…but weirder would be time toys. Which self-replicate, ostensibly by stealing time!

The book also covers fey, providing takes on leprechauns (in 3 variants), nymphs (in 5 variants – including star nymphs!!), 6 satyr variants (including the NASTY demi-god satyr-king)…and the book does feature an array of different infernals as well, ranging from the nightmare-themed alp to variant cambions to corrupters, dealmakers, imps, the mighty Cr 19 merchants of hell, CR 23 Charon…and succubae – including some interesting notes on the nature of incubi.

In the section on magical beasts, we learn about echo bats, the GIM (Giant Invisible Mantis), unicorns and the planar-fabric manipulating warp spiders. Among the monstrous humanoids, we can find embodiments of the ID and the merps (heads with arms sticking out and nasty magical might), which are presented in a wide variety of power-levels.

At CR 20, the mighty bodhisattva comes with unique talents and a magic item associated with these semi-divine native outsiders, and two oni, 2 rakshasa, 2 yaksha and 2 yaoguai complement the exotic array of these folks.

Among the plants, things get weird – with clockwork vines that work not unlike machinery…and something that made me laugh incredibly hard. The Gazebo. (If you’re not familiar with why this is hilarious, google it – it’s a classic in-joke of roleplaying games…) The book also contains variants of guardian plants, the disturbing venus fisher (talking about nightmare-fuel there…)…that plant is NASTY. And it’s smart.

On the undead-side, we get death knights and 3 variants of draugr…oh, and there is Janus, god of portals. CR 25. Don’t mess with him. We also get variants of skeletal students…and from there, we move on to the mighty teachers of Windfell Academy.

They are worthy of being big bosses, one and all, and come with detailed notes. These guys include a lich in charge of healing and necromancy (who also tried to take over the world once, but that’s long past…). Professor Clik, a clockwork automaton, claims she built herself…and she is no less powerful than the mighty lich. Oh, and yes, these guys and gals have unique artifacts and tricks galore up their sleeves.. There also would be a mighty black unicorn professor…and Fexmet. Professor fexmet is a ferret and was once a wizard’s pet. It’s a frickin’ CR 20 ferret. The caretaker of the academy would btw. be Geemet, the goblin unchained rogue (including a living, intelligent dagger). The headmaster was once the hierophant druid…of the whole world. Professor Meeda would be the teacher of shapeshifting and battlemagic, and hence, her artwork depicts her as a winged, 4-armed reptilian. She also is LG. Oh, and there would be Savesha – a reformed succubus, who has managed to actually change her own TYPE. Yeah, she is one amazing character – and the presentation of her as a strong female character, all sans resorting to the seduction-trope, is pretty nice to see! There also would be a Tiny, venerable gnome Toc (don’t ask about either height or age…) and professor windjina. A weremantis – and perhaps a former queen…and she is pretty much dangerous…the inverse of the reformed succubus, if you will.

The  book closes with a list of universal monster rules and a handy appendix that groups the statblocks by CR.

Editing and formatting are very good, I noticed no undue hiccups or issues. Layout adheres to a two-column full-color standard with a blend of sketch-like pencil-style drawings that actually first felt a bit jarring, but grew on me fast – the illusion of a field guide is enhanced by teh style. The pdf comes fully bookmarked for your convenience, with detailed, nested bookmarks.

Adam Meyers, with contributions from Andrew Stoeckle, Derfael Oliveira, Michael Uhland, Douglas Schaub, John Little and Casey Hayes, has created a bestiary that is much, much better than I hoped it would be. I expected this to be basically: “Let’s convert critters to Spheres of power-the bestiary”. It is so much more than that.

While there are conversions in this book that cover the basics, this stands out due to two things: 1) The unique creatures are absolutely amazing and evocative. 2) The book is a joy to read due to the framing device employed. I really had fun dissecting this tome of critters and more than once, I was inspired by the commentary. Oh, and the staff of the wizard’s academy is inspired indeed. High-powered, mighty and creative, they are amazing, cool NPCs that ooze creativity and flavor. What more can you ask from a book like this? It should also be noted that the dangerous, whimsical and at the same time distinctly far-out nature of a Wizard’s Academy is perfectly encompassed by the mighty NPCs herein – better than in pretty much any supplement on the subject matter I’ve read.

This is well worth a final verdict of 5 stars + seal of approval and every campaign using Spheres of Power should at the very least get this bestiary, even if you don’t want to run the module.

You can get this cool bestiary here on OBS!