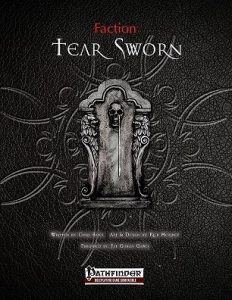 Death in itself is a tragedy; it is one of our defining forces, in many cases our greatest fear and the finality of its force, the inevitability makes it impossible to come to terms easily with. In real life, I can recommend Julian Barnes’ “Nothing to be frightened of” as perhaps the most touching and well-written book on the subject matter I know, but the matter of fact is that, in a fantasy world, not even death is necessarily final, with the abomination of undeath lurking around every corner, with each necromancer having the potential to send the fallen back to haunt those they once cherished. In a way, this corruption of memory and spirit, much like the experience of those of us left behind by a premature death, can be only considered to be utterly gut-wrenching. A brief tangent – I do not wish to insult anyone’s beliefs with this statement, but I am an atheist and ultimately, believe that death is, literally, the end. In such a context, undeath holds a more striking resonance, feels even more existentially wrong and twisted, amplifying the loss experienced by those left behind a hundredfold.

It is from such an experience, though not atheism (considerably harder to maintain in a world where gods grant magic…) that the Tear Sworn have sprung forth, founded by a paladin and a survivor of a horrid massacre (which is detailed in an extensive piece of introductory prose), they are unified in the experience of having had to witness a loved one rise again. They are the guardians of the sanctity of the dead, an order of Lawful good hunters of the undead and stewards of the grieving., led by paladin/holy vindicator Gabriel Stoddard, the write-up provides information on good (and less common) class choices for members before going into the details of their headquarters (a church in a graveyard, obviously), information on joining the faction, etc. The ceremony and secrecy requirements are comparatively lax, considering that the faction operates in the open and three sample missions, provided as brief sketches, can guide an enterprising GM in the creation of thematically-appropriate adventures.

The pdf also features a detailed page that sums up varying prestige awards and conditions for losing prestige , before going into the details regarding the services and benefits provided for the tear sworn, ranging from 1 TPA, 1 CPA to 30 TPA, 20 CPA, covering a whole career devoted to the faction and allowing successful PCs to command hunt teams at higher levels and gain the assistance of the powerful leaders. These benefits generally are well-crafted and fall generally in line with the options provided for similar factions.

The pdf also features 5 faction traits- these allow for better +atk when fighting with other tear sworn and also covers better initiative. While the bonus type if properly codified here, this section nonetheless has a couple of formal glitches “1 time per day” deviates from default rules language; Knowledge (Religion) lacks the brackets around “Religion” and I also noticed typos – this section could have used another editing pass. The pdf also sports 6 faction-exclusive feats and range from the okay to the problematic: When a feat explicitly allows for bonuses to the save versus the effects and abilities of undead, I can get behind that. When the “undead” caveat is suddenly missing from the 1/round reroll-clause that is part of the feat, things can be misread in pretty nasty ways. The rules-language here could have used some capable development, sporting, beyond minor hiccups like that quite a few deviations from the standard. And yes, SP 1/day detect undead is standing right next to aforementioned, powerful feat – internal balancing could use a bit fine-tuning as well. And the SP’s name is not italicized. A feat to be better at using holy water is awesome in concepts… but imho would have required better holy water as a new item to warrant the feat-expenditure.

The pdf also sports an assortment of new/collected mundane items, from classics like powdered silver to silver stakes, the ideas are cool – but, once again – development required. Reinforced chainmail weighs +50% sans increasing the ACP, but does grant DR 3/-; and that for a measly 300 gp. This should a) probably be more expansive, b) a magic item and c) lacks part of the required information. Similarly, I love the idea of having a blade you can break off mid attack to stake vampires – cool. But the pdf never comments on how losing 1/3 of the blade thus affects the weapon, whether it receives the broken condition, whether it can be sundered easier..or what kind of action breaking of the tip of the blade actually is. Similarly, an underpriced, 5 gp +5-bonus-granting piece of equipment grants a bonus vs. odors. Okay, does this include inhaled toxins? The stench quality? Spells like stinking cloud? No idea. The pdf ends with a brief note on allies of the Tear Sworn.

Editing and formatting of this book doe show that it is a remnant of the old Fat Goblin Games – they frankly need work and are significantly less refined than the pdf deserves. Layout adheres to a beautiful two-column full-color standard and the pdf comes fully bookmarked for your convenience. Art-wise, we get glorious pieces by Rick Hershey, though they have been taken from his backlog – I have seen all pieces herein in other publications and particularly the horned fellow as a stand-in for the leader Gabriel (who is human, not a tiefling) kinda irritated me.

Chris Bayes’ tear sworn are a faction-book. This, in itself, is already pretty cool. There frankly are none out there, apart from some for the Vathak-setting. And I *like* using new factions in my game. The idea behind the tear sworn, while not necessarily novel, is similarly a concise and fun one and generally, the ideas behind everything herein can be considered neat. I *like* the idea of disposable staking swords. It’s awesome. This, however, does not change the sad matter that the tear sworn’s crunch, ironically, isn’t up to the promise the great beginning and nice benefit-array promised. As concepts, the respective pieces herein are worthwhile, but the execution in many instances is flawed to a degree where a GM has to do too much to make them work – particularly considering the relative brevity of the book, the glitch-density in the crunch is not something I can ignore. Make no mistake – as a person, I have drawn some nice ideas from this pdf that I will stat out myself. But if you’re not in it for the ideas or simply the TPA/CPA-benefits, then this will probably disappoint you. As much as my impulse as a person is to rate this at least 3 stars to pay my respects to the ideas, as a reviewer, I can’t and thus am forced to sadly rate this 2 stars.

You can get this evocative, if flawed pdf here on OBS!