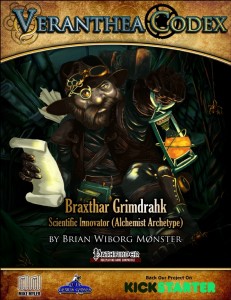 This free preview of the Veranthea Codex clocks in at 8 pages, 1 page front cover, 1 page editorial/ToC, 2 pages of SRD, 1 page advertisement, leaving us with 3 pages of content so let’s take a look, shall we?

Without much ado and aplomb, we dive into the new Scientific Innovator archetype. Instead of extracts, these fellows generate serums – which become extraordinary effects at 10th level! Instead of mutagens and the Hyde-style that accompanies these fellows, they instead turn to dabbling in gunslinging and thus also may elect to choose grit feats in lieu of discoveries – this is optional, mind you! At 11th level, the class even receives a limited grit pool based on int (as opposed to amateur gunslinging) and as a capstone, the class may generate antimagic devices. But before I get to these, wait a second – the archetype receives its own serum-list, yes, but in a smart move, spells not on the list can stlll be included – at VERY high costs.

Now I’ve mentioned devices – the scientific innovator can make essentially the non-magical equivalent of magical items with this feat, the archetype mastering these tricks even more thanother characters taking the feat.

The eponymous Braxthar Grimdrahk turns btw. out to be a dwarven alcemist 6 (scientific innovator) and comes with full-blown statblock and background, as well as two devices – an invisibility purging lantern and snares and pits and traps detecting array of lenses that can reproduce the effects of the two spells.

Conclusion:
Editing and formatting are top-notch, I noticed no glitches. Layout adheres to the drop-dead-gorgeous full-color standard of Veranthea and the pdf sports beautiful full-color artwork. The pdf has no bookmarks, but needs none.

Brian Wiborg Mønster delivers a cool character and nice supplemental material – the serums are a unique take on alchemy and the idea of devices can easily be further expanded. Oh, and this is FREE. You quite literally have no reason not to get this fellow to use or scavenge for pieces – and as a free preview, as something given away, this is 5 stars + seal of approval.

You can download this pdf for FREE here on OBS!

If you like him, drop by the kickstarter that ends this week-end – right now, every backer of $25 and above receives an at-cost voucher for the PoD! So even people who need paper like yours truly have no reason to hold back!