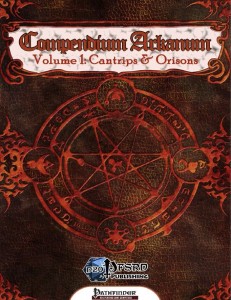 This pdf clocks in at 19 pages, 1 page front cover, 1 page editorial, 2 pages SRD, 1 page “Thank you for buying note”, leaving us with 14 pages of content, so what is this actually about?

Yet another spellbook? No, actually, this is something different. Remember Monte Cook’s Arcana Evolved? One of the better d20-systems and variants of Dungeons & Dragons released in the 3.X days of old, its spells had a particular, rather rewarding mechanic- they could be cast in two additional ways – one heightened and one diminished way, each modifying the spell’s level by +1/-1 respectively. The effects were modified thus and the overall result was a more interesting spellcasting system, especially with regards to counterspelling. Fast forward to Pathfinder.

In this book’s pages, we are introduced to an array of cantrips and orisons (which have no diminished effects, already being 0-level spells), which can thus be upgraded to 1st level. The pdf contains all cantrips and orisons from the core rules, the APG, Ultimate Magic and Ultimate Combat, all upgraded and studded with the heightened effects. Now the respective spells are organized by letters and the heightened effects per se are interesting – take acid splash: Its heightened version allows you to hold the orb of acid for exactly 1 round – any longer, and its blows up in your face. However, if you hold it for 1 round, it instead deals 1d4 points of damage AND 1 point of str-damage. While usually I’d complain about low level attribute damage, the cost of holding the orb and planning make this a valid option. Killing word-count/space-limitations, dealing damage to elemental/ [fire]-subtype creatures via create water, rolling a faster detect magic into one spell with identify, ability to detect poison behind thin barriers… Have I mentioned programming ghost sounds? Or affecting magical objects with mage hand?

It is rather surprising, really, to see so many small options adding rather than detracting from story-telling potential, with just about every option making the respective cantrip/orison MUCH more interesting and versatile.

D20pfsrd.com Publishing has in my opinion a great series at their fingertips here – in contrast to some of the more problematic first products of the company, this one looks professional, has solid rules-language and sports a lack of glitches I consider the hallmark of a good pdf. Author Timothy Wallace delivers a pdf that is humble, yes, and its premise looks boring, doesn’t it? Well, it’s not. Contrary to what one would expect, namely to pay for miniscule new content and double for the spells, the modifications enrich the respective cantrips and orisons to an extent that is more than awesome and enriches one’s game. My only gripe with this book would be that it’s not a massive tome of all spells, including 3pp-spells…Hey, one may dream, may one not? ;P Seriously, this is one of those little, humble pdfs that just are cool and fun and it made me rather excited about future installments of the series. Not all is perfect, though: I do think that the pdf ought to explicitly spell out how counterspelling, CL, metamagic etc. works with heightened/diminished spells for those not familiar with Arcana Evolved et al. My final verdict will clock in at 4.5 stars, rounded down by a margin to 4.

You can get this nice take on more versatile spells here on OBS and here on d20pfsrd.com’s shop.
Endzeitgeist out.