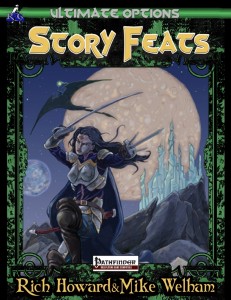 This pdf clocks in at 21 pages, 1 page front cover, 1 page editorial, 1 page SRD, leaving us with 18 pages of content, so let’s take a look!

After one page of aptly-written prose, we dive into the basic recaps of what constitutes a story feat, how to read them and common rules terms like “challenging foe”, “Decisively Defeat” etc. this is important, for within this context the wordings carry meaning and if you happen to not own perhaps one of the best books Paizo has ever made (Ultimate Campaign), in which these feats were introduced, well then here you have it explained.

The pdf also provides a massive table of story feats with appropriate backgrounds in case you also use these. Now why are story feats awesome in my book? Know all those stories where a hero vows to accomplish something, then succeeds and transcends his former capabilities? That#s what sory feats are – they are essentially rewards for making a compelling, interesting character the DM has an easier time to work with. As such, and I feel obliged to mention this, players should work together and with the DM to ensure that a good yarn can be woven that potentially offers fulfillment for all those story feats – for yes, they increase in power when their built-in goal has been reached.

Got that? Awesome, so let’s take a look at what we get herein! Take Armchair General as the first story feat – representing a formal, theoretical military training, it requires you to select a teamwork feat you have. 1/day, as a standard action, you may grant said feat for cha-mod rounds to all allies within 30 ft, whether they fulfill the prereqs or not. To unleash the feat’s true potential, though, you have to be in charge of a large military unit of at least 500 and lead them to a decisive victory, getting some practical experience in the field of war. if you manage to do this, you can designate a limited amount of so-called field-leaders, who then may disperse the teamwork feat as if they had the base armchair general feat sans its completion bonus, allowing for an epic spread of temporary teamwork.

On a more mundane and easier to fulfill level, Blow the Joint nets you 2 Knowledge class skills and skill bonuses that increase once you’ve been to a bunch of truly big towns. Additionally, people like “one of their own making it in the big city”, making the townies more favorable toward you. Likewise, obsession with an obscure artist and collecting said artist’s works may allow you upon completion to use appraise in lieu of spellcraft for item identification purposes. Characters that are Cryptohunters r Conspiracy Nuts, even those brainwashed by cult indoctrination or devoted to one of the deadly sins – all get their proper and cool options here. It should also be noted that the cardinal virtues also are an option, not just the runelord centric deadly sins…

Or perhaps a certain creature has traumatized your character and slaying it by facing down his/her fear is what you’re going for? What about preventing the death of the last of a creature’s kind? Paying a karmic debt? Devoting yourself to a familial quest handed down over the generations? Go where no one has gone before? Or perhaps you want to run the big con, reconnect with your heritage after being estranged from it, act as a mentor for another (player) character? Be a warrior that eschews brutality? Perhaps you have survived a dread plague or are possessed, blacking out? Perhaps your character is the only one believing in one person’s innocence or perhaps, you seek to stem the uprisings in your home country, believing in your nation’s ideals and values.

Even characters seeking true independence or those that, in their hubris, seek to summon an avatar or follows an unknown deity no one else knows or believes in – the options are often pure narrative gold – specific, yet not too specific and the benefits generally are interesting, especially when tying in with the story in less crunchy benefits, weaving the story of their respective feat further.

Editing and formatting are very good, I noticed no obvious glitches that would have impeded my ability to understand the content herein. Layout adheres to Rogue Genius Games’ printer-friendly two-column standard and the pdf comes with nice full-color stock art. The pdf comes fully bookmarked.

Rick Howard and Mike Welham deliver an array of feats that manage to not bore me, which, at this point, is quite a feat. get it. Ouch. Yeah, I know, I’ll put a buck in the bad joke jar. Kidding aside – I like the basic premise of story feats and the story feats provided herein greatly expand the cool concept by filling the gaps left by the original introduction in Ultimate Campaign. Generally, I would have enjoyed it if some of the story feats herein had been a bit braver – there are quite a few that do some combination skill-bonus stuff, which, while nice to have, has been done before. Some more synergy with perhaps Downtime, other feats, perhaps even, dare I say it, Story Feat-trees, would have made this pdf even better. As written, it is an enjoyable read that has crunch for once properly support the story and not vice versa, which is a good thing in my book. At least if DM and player have agreed upon story feats, which they should. Communication here is necessary and valuable, but this basic good provided as a prerequisite, I think these feats will have something to add to the campaigns. My final verdict will hence clock in at 4.5 stars, rounded up to 5 for the purpose of this platform.

Invest in some story and get this pdf here on OBS and here on d20pfsrd.com’s shop!