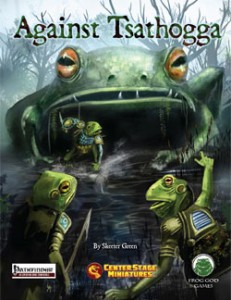 This module is 15 pages long, 1 page front cover, 1 page editorial, 1 page ToC, 2 pages of SRD and 1 page advertisement, leaving us with 9 pages of content, so let’s take a look, shall we?

All right, still here? Well, DMs, this is one of the modules that can work well as a one-shot or a campaign’s end/darkest moment prior to the epic final stretch Intended for PCs of level 16+. Why? Because the module unabashedly states that it’s intended as a pretense to use the massive Center Stage Tsathogga-mini. so yeah, the climax of this module may see the Demon-Frog-God actually making an appearance. Yes. That one. recall the CR? Yeah.

But though this module is a pretense, it is not bar its story – the frog-men of the Tsathar have been making sacrifices to Tsathogga in their desolate wasteland for ages – never have their pleas been answered. Now, they have an ancient statue – which turned out to be one of the Ranan, dread progenitors of the vile frog-people. The Ranan, awake, has started a summoning, one that will be crowned with success, lest the PCs intervene! In the desolate, vile marshlands, mankind’s doom draws near…and it’s up to the PCs to travel there and stop the impending catastrophe.

The marshland Tumulus, while not rich in creatures, does feature one deadly disease that suffuses the bog, potentially weakening the PCs even before the slaughter begins – the PCs have to enter Tsathogga’s Maw, a deadly cavernous complex with Tarteran Viruses, poisonous frog excrement, Custodians of Tsathogga and vast arrays of tsathar – all waiting to annihilate your PCs. Oh yeah, have I mentioned that the Ranan is CR 20, has over 400 hp and more than half have to be inflicted to interrupt the ritual? Oh, deadline, btw. – 3 rounds. 3 ROUNDS. Against waves upon waves of high-level tsathar and the dread progenitor. Otherwise, frickin’ CR 30 Tsathogga is here and PAIN begins – which would make for a furious final for a campaign, especially if the PCs manage to escape (by e.g. shoving tsathar aside so tsathogga eats them instead) – a kind of frog-pocalypse that would make for an exceedingly awesome climax over the last couple of levels for any campaign.

We also get teh Filth-Priest of Tsathoggua archetype as well as three new high-level threats, though Tsathoggua’s stats are not included – you’ll need the Tome of Horrors Complete for those, which I consider the one flaw of this otherwise fun, apocalyptic high-level romp.

Editing and formatting are top-notch, I didn’t notice any glitches. Layout adheres to FGG’s concise, printer-friendly two-column standard and the pdf comes fully bookmarked. The b/w-artworks are superb and the cartography deserves special mentioning – not only is it great, it is provided in a delightfully old-school isometric viewpoint – and personally, I’ve ALWAYS loved these – while not perfect for battle-mats, they just feel more alive, more vivid to me. I would have loved a player-friendly version, though.

This module could have been a simple pretense, a module to phone in – instead, PFRPG-conversion expert Skeeter Green provides us with a superb example that shows he can write great modules (and should do so more often – his contribution to Rappan Athuk was glorious!) that breathe a sense of filth, decay and desolation, a module that manages to instill an almost Call of Cthulhu-level sense of desperation, which is anything but easy to do at this level. Apocalyptic, fun and a chance to whip out a huge monster-mini (or simply a statblock you’d otherwise probably never use), this module is exceedingly fun and misses my seal of approval only due to the lack of player-friendly maps and the fact that Tsathogga’s stats have not been included. Final verdict: 5 stars, in spite of its brevity.

You can currently get this module exclusively on the Grog God Games hompage, here.