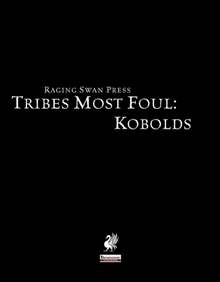 This installment of Raging Swan’s Tribes Most Foul-series is 14 pages long, 1 page front cover, 1 page advertisement, 2 pages editorial, 1 page ToC/foreword, 1 page advice on how to read statblocks for novice DMs, 1 page SRD and 1 page back cover, leaving us with 6 pages of content, so let’s take a look at what we get in this particular installment, shall we?

Now if this is your first TMF-supplement, here’s what they’re basically about – you get 3 tribes of the respective species, each tribe coming with advice on how to integrate the respective tribe in your campaign, a full history (including customs) and a tribal roster to give you an overview of the tribal forces. We also get knowledge DC-information and a list of fluffy info on notable personas as well as a write-up of the tactics employed by the respective tribe. Furthermore, each tribe comes with its own glorious b/w-crest/banner and at least one sample statblock, usually of one of the notable persons of the tribe.

All right, the first tribe herein would be the Brightlander Kobolds, which essentially are the strike-force/eugenics experiment of a blue dragon, who has managed to create kobolds not sensitive to light. Led since over 200 years by the half-dragon kobold ranger (skirmisher) 11 Nezzit (fully statted), they are a formidable desert ambush predators that also have a fully statted half-dragon behir as a clean-up/secret weapon to annihilate particularly nasty threats.

Now the matriarchal, forest-dwelling Green Mother’s Scales also worship a dragon – a great green wyrm. Ruthlessly exiling any kobolds without green scales, these woodland-bandits come with a  half-dragon kobold sorceror 5 (the leader Lareen) and her lieutenant Kaxal, a crossbow sniper 7.

The final new tribe would be the Kobolds of the Diabolical Trap Guild, who had their territory swallowed by a massive, sprawling metropolis. Adaptable, the kobolds struck a deal with the thieves’ guild and now are the foremost authority for traps. Statblock-wise, we get a level 9 charlatan rogue as well as a chameleon 4 – after all, these kobolds have to be stealthy/fit in…

Editing and formatting, as I’ve come to expect from Raging Swan press, is top-notch. Layout adheres to RSP’s crisp 2-column b/w-standard and the pdf comes fully bookmarked for your convenience as well as in two versions, one optimized for print-use and one for screen-use. The banners/crests are awesome, as mentioned.

Usually, author Mike Welham delivers superbly-crafted supplements and on the mechanics-side, this is no different – the statblocks are solid and the Tribes coming with different immunities/crunch is rather neat. However, I was also a bit disappointed: The tactics/combat strategies mentioned are somewhat bland and the tribal customs per se also are not that special – worshiping dragons (TWICE!) and creating traps is more or less what one would expect, which isn’t bad – still, I would have liked e.g. the tactics using their respective immunities: Thirst and Lightning for the Brightlanders, for example, or acid-bombs for the Green mothers – something to make them stand a bit more out. Now don’t get me wrong – these are well-crafted tribes with more than solid statblocks, but fall a bit short of what they easily could have been. My final verdict hence will clock in as 4 stars for a good, though not superb supplement.

You can get these kobold-tribes here on OBS and here on d20pfsrd.com’s shop!