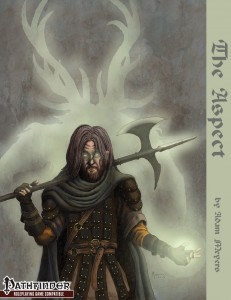 After a well-written page of prose, we delve into the mechanics of the aspect – direct servants of their deities and outsider lords. Aspects need to be within one step of their patron’s alignment on one axis, get d8, 2+Int skills per level, proficiency with light and medium armor and shields as well as simple weapons and his deity’s favored weapon. The class gets good will-saves, 3/4 BAB-progression and spontaneous spellcasting of up to 9th spell level via cha, which they also use in lieu of wis to determine their effective cleric level. Aspects begin the game with 3 domains , which double as the spells s/he knows. At 5th and 11th level, aspects gain access to a forth and fifth’s domain’s spells respectively, but not their powers. Only two of the starting domains need to be taken from the patron deity’s portfolio – all further domains are free and represent an aspect’s own growth/ideology.

At first level, Aspects may choose a favored weapon, with which they get exotic weapon proficiency or alternatively, improved unarmed strike. 1/day for a minute as a standard action (+1 time at 5th level +1 for every 4 levels after that) – while in this aspect-form, you are considered a native outsider and get a +1 sacred/or profane bonus to atk, damage, saves, AC and ability and skill-checks. These bonuses also scale up to +5 at 17th level. Aspects also form a godly bond which takes one of two forms -one would be the godly icon. As long as the aspect is in possession of said items/he can cast +1 spell of every spell level per day. Apart from the level restriction, which still applies, the aspect is furthermore treated as having the appropriate item creation feats for the purpose of enchanting said icon. The second option would be the divine companion, but more on that later.

Starting at 3rd level, aspects may grant 1 endowment, + an additional one at 8th level and a 3rd one at level 15. These endowments grant the aspect the power to PERMANENTLY enhance his allies: Either with a +2 bonus to an attribute, +1 to all saves, +2 to AC, make a creature an aligned subtype or net +1 to the blessed creature’s caster level. These endowments may be withdrawn as free actions – the only limit being the number of endowments that can be active at one point. Due to bonus types, stacking them does not work. And… you’d expect an overpowered- rant now, but I actually really like this ability – it is powerful, but limited and feels unique in both mechanics and execution. While personally, I would have loved a limit on the amount of times per day the endowments can be relocated, I think this might still be considered balanced, if on the upper end of the power-scale.

At 3rd level and every 4 levels after that, aspects may also gain a divine boon, essentially this classes talents – over 30 of them are provided to choose from. Beyond boons like some spells added to the spell list, vision 1/week, channeling energy, access to orisons, getting access to the domain powers for a domain you have (relevant for the 5th and 11th level domain) – you get the idea. Most of the different boons deal directly with the aspect-form of the class, adding additional effects when going into aspect form: You might e.g. opt to grow natural claws when in aspect form, emit a frightening aura, become large (and even huge) or diminutive, extend the duration of your aspect-form,  enhance your caster level by +2 or net allies bonuses to will-saves when in aspect-form or add elemental damage to your natural attacks/weapon attacks. Now while I like these options, they also mean that aspects are all about the nova – you have this immensely cool beast of a character for a couple of rounds – and the rest of the adventuring day, you’re a bit mundane. Personally, I’m not a fan of nova-characters that are, per design of their class, geared to such a behavior. Another issue would be the boon Extra Endowment – it nets you +1 endowment to use on your allies. And can be taken multiple times. Where the basic endowment-system barely scraped by my OP-meter, this one is simply too strong, expanding the use of endowments and also somewhat cheapening their effect as a distinct class feature.

Starting at 7th level, an aspect becomes a paragon, which entails two choices: Number one would be to gain the ability to inspire allies 1/day as an immediate action, allowing for the reroll of any d20. The second one nets you the leadership feat and gets a bonus to the leadership score whenever s7he builds a place of worship – nice nod towards the Ultimate Campaign-rules. Where this becomes a tad bit problematic is with the other part of this level 7 ability – you can now grant spells to clerics. As a LEVEL 7 ASPECT. If you can’t see how that will run amok within the internal consistency of your campaign world, let me spell it out: Beyond the extreme possible fragmentation of theologies, the result would mean that deities, if they did not want their portfolios usurped, had to quash those guys – fast. Beyond that, an internal inconsistency also makes this absurd – so an aspect is only level 7, but can grant 9th level spells?? Where’s the scaling/ tradition of power-gain between demi-gods and full-fledged divinities? The idea may be cool, but its implementation is problematic at best.

Less problematic and rather cool is the later ability to get one’s own private demi-plane – on a permanent basis. What’s really problematic in my opinion – 1/day plane shift into said demi-plane, with the only restriction being that the aspect has to return to the place s/he escaped from upon leaving the demi-plane. While rather powerful at 11th level, I can still see that one work. The high-level powers further expand and become full-blown outsider. Honestly, in spite of the classes relatively early abilities to become deity-like, the final capstone rather underwhelmed me.

Now, I’ve mentioned divine companions: These get up to 15 HD, 8 feats, 60 skill points, a max # of attacks up to 7 and up to 26 evolution points as well as two good saves and one bad one. They may also share spells, gain empathic/telepathic links etc., but are overall not as powerful as eidolons. Being intelligent, though, and available as an additional class feature, they still blast the Aspect further off the balance-scale.

We also get a new feat for an extra boon and an archetype with a fixed  icon at first level, a divine companion at 2nd level and a boon at 3rd level and every three levels after that – being EVEN MORE POWERFUL. WHAT? Seriously? How can anyone look at the class and say: “This is not strong enough, let’s make an archetype that sacrifices nothing and is even more op?” Oo

The pdf concludes with some basic advice on integrating aspects into your game world – the thing is: They stipulate premises like the law of petition, which may or may not hold true for your setting – plus, the shoehorned example on how deities can grant spells they don’t know feels lazy and does not answer questions, just pose more of them.

Editing and formatting are top-notch, I didn’t notice any significant glitches. Layout adheres to a gorgeous 2-column full-color standard with thematically-fitting, neat artworks and the pdf comes fully bookmarked and hyperlinked and in 3 versions – the regular one, one without d20pfsrd.com-hyperlinks and one that is more printer-friendly.

I like the idea of this class. I really, really do. I LOATHE the execution. This class is broken for all but the highest of power-levels. First of all, we get a spontaneous casting-class with a limited spell-list, yes, but also 3/4 BAB-progression PLUS the powerful aspect-nova-aura. While I don’t particularly appreciate the focus on aspect-form’s nova-like design, I wouldn’t complain about that one. Neither about the endowment option, which is a unique and interesting mechanic. What I do complain about, is that they all add up. Full divine spellcasting (+channel via boon) – that are TWO powerful class options. Then we add 3/4 BAB-progression – plus a moderately powerful one. And then things get broken. Hardcore. The Divine Companion is one of the worst damn broken pieces of crunch I’ve seen in quite a while. Bear in mind the permanent bonuses by endowments (which can be circled around at will), the aspect-form – and then ADD essentially an eidolon-like companion – stronger than an animal companion, with shared spells and evasion. That’s the ONE DEFINING POWERCOMPONENT of the summoner-class – and the aspect gets it as a BONUS. AS A BONUS. In addition to 3/4 BAB, spellcasting of up to 9th level (weep, puny summoner!), its aspect and its endowment. This component needs to DIE. A fiery death.

I hated this review. Why? Because I like the concept of the class. I like the ideas, the step with endowment – but it falters and fails. Instead of going for something unique, the class essentially steals defining signature abilities from various base-classes and laughs at them – for they only have these components, while the aspect gets them all. This is the most overpowered class I’ve read for Pathfinder so far. The one and only instance where I’d allow this class anywhere near my table would be for a one-on-one campaign – in order to not have to scale the encounters down too much.

And even if you do have an extremely high-powered group with munchkins and hand this class to the one non-powergamer, the result is complicated – because the fluffy abilities like granting spells runs contrary to established canon in EVERY CAMPAIGN SETTING I HAVE EVER READ for any D&D-tradition-rulesset. It also cheapens the achievement of becoming a full-fledged god – why not unlock granted spells over the levels? It would still be very powerful, but at least it would make sense in its own logic.

As written, this class is completely and thoroughly overpowered and definitely needs a major beating with the nerfbat. Beyond that, it is also problematic in its fluff. I like the basic premise of the class and some of its ideas, but with the problematic repercussions for internal logics of campaign worlds coupled with its vastly off-scale power, I am left with only one recourse. While I still like components of this class, I can’t recommend it to anyone as written. Thus, my final verdict will clock in at 1 star, in spite of per se good production values.

If you still want to take a look, you can get this class here on OBS and here on d20pfsrd.com’s shop.