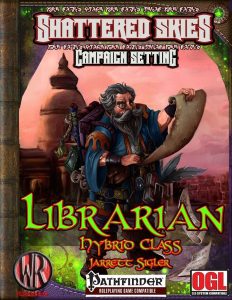 This hybrid class clocks in at 11 pages, 1 page front cover, 1 page editorial, 2 pages of SRD, 1 page back cover, leaving us with 6 pages of content, so let’s take a look!

The librarian is a hybrid class of bard and occultist and, chassis-wise, receives d6 HD, 6 + Int skills per level and proficiency with light armor and bucklers as well as light weapons. Librarians incur no spell failure chance when using light armors and bucklers and cast arcane spells governed by Intelligence. Spells are drawn from exotic books called “libri (singular: “Libris”) – for each libris learned, he can add one spell for each spell level available, from that libri’s school list to his list of spells known. A libris may be chosen multiple times, adding a new spell at every level. Spells do not need to be prepared in advance and casting a spell sans the libris containing it consumes an additional spell of that spell level’s array. The class gets 1/2 BAB-progression and good Will-saves and, as the parent class, spellcasting of up to 6th level.

At 1st level and every 3rd level thereafter, the class can attune an additional libris and once it and its school has been chosen, it cannot be changed. Kudos: The ability gets interaction of spells contained on both bard and occultist spell-lists right. A libris also has a power, but more on that later.

“Athenaeums” (or “Athaneas”, as the table calls it) allows the librarian to use a Knowledge skill check (should be capitalized in the text) or transcription of material in half the time while in a library, sans cost of ink (Does this eliminate scroll cost completely? Probably not, but the ability could be clearer.) Additionally, he may make Knowledge checks untrained. A librarian may invest 1 spell slot of a level he can cast into an athenaeum to add +1 to the DC of a chosen spell. While generally understandable, that part of the rules-language should imho mention choosing a spell beforehand.

Librarians begin play with knacks, determined by libris and they may, with just a minute of uninterrupted study, replace a spell known with another from the libris studied, with the new spell remaining in memory for up to 1 hour per class level, before the original spell returns. The spells have to be of the same level. 2nd level provides the ability to activate a spell completion item after 10 minutes of study – only the knowledge of activating one such item may be kept in mind.

3rd level yields bestow knowledge, usable 3 + Cha-mod times per day – this grants allies a +2 circumstance bonus at atk, damage, CL or saves versus the chosen creature, with the bonus increasing by +1 at 6th level and every 3 levels thereafter. It lasts for 1 round “per intelligence modifier” – that should have a minimum 1-clause and the ability lacks an activation action.

Upon reaching 5th level, the class gains a pool of memory points that may be used for one of 8 effects. Problem: The pdf fails to specify HOW MANY. I *assume* the number in the class table may represent that…or it represents how many such abilities he gets to choose. I have no idea. This core feature of the class does not work RAW. It is also really annoying to note that the respective abilities, even if you houserule them to work, don’t all specify an activation action. So yeah, does not work as written.

At 8th level, he may consume Bestow Knowledge uses to add a d6-surge-like bonus to the skill check – weird: Supplementing other characters this way does not consume the use, which can be pretty weird in game. I also think the benefit of the ability should be a typed bonus, but that as an aside.

Starting at 14th level, the librarian may cast any spell in a libris on hand, provided he consumes 2 spell slots of the required spell level instead. Scrolls may be studied as a move action and may be cast without consuming them by expending a spell slot instead.

A total of 8 libris are provided, all of which come with their own spell-lists and abilities and there are some serious gems here: Recitation for energy resistance, marking targets, reading omens…the tricks here are certainly flavorful. Alas, the rules here do also sport some hiccups: “lightning” instead of “electricity” as an energy type, suddenly using Wisdom as governing attribute and non-capitalized attributes…you get the idea.

Editing and formatting are the things that tear down this class. On a formal level, this isn’t that bad, but rules-language and consistency have issues. Layout adheres to a 2-column full-color standard with really nice full-color pieces. The pdf has no bookmarks, which acts as a comfort detriment, and annoyingly, does not allow for the copying of text – you actually have to copy the text by HAND if you want to use this. Big comfort detriment.

Jarrett Sigler, with additional writing by Robert Gresham, ALMOST gets this right. I was so happy when I started analyzing this class. After slogging through previous hybrids, I so hoped that this would finally deliver…and it seemed like it did. The class catches a lot of the more complex issues and ALMOST works as intended. Almost.

I really like the focus, chassis, balancing of the class – it looks like a well-made hybrid class with a distinct identity…and then, one of its central class features doesn’t work. It’s frustrating, to say the least. So yes, beyond cosmetic hiccups, this does require, once again, cleaning up of the rules. But really, not much. An hour, tops, and you have a nice class. In fact, I really hope this gets cleaned up – the librarian certainly deserves shining properly. I do enjoy the class a s a whole, but with its flaws and hiccups, I can’t go higher than 3 stars; once/if it gets fixed/if you’re willing to work a bit with it, consider this 4 stars instead.