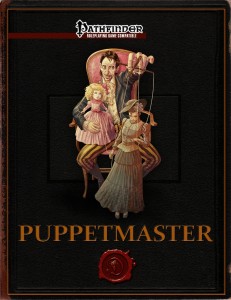 Mechanically, Puppetmasters get d8, 6+Int skills per level, proficiency with blowgun, bolas, daggers, handaxes, nets, whips, light and heavy crossbows and light armor, not incurring any spell failure chance while wearing it. They get 1/2 BAB-progression, ggod ref and will-saves as well as access to arcane spells of up to 6th level, cast spontaneously via Cha. Puppetmaster gain a VERY interesting roleplaying ability – doublespeak allows them to speak class-level minutes per day and have different creatures hear different things, choosing between the two layers his language carries for each creature, allowing him e.g. to parlay with foes while discussing preventive-strike strategies with his allies. He also starts game with a workshop that greatly increases his prowess when creating dolls and puppets when he’s in it. Puppetmasters are also excellent manipulators, gaining bonuses that improve on Bluff, Perform (Puppetry) and other puppet-related skills. The defining characteristic of the Puppetmaster, though, would be his Font of Wonder, a pool that starts off at 6 and goes up to a whopping 215 at 20th level.

These points can be used to specialize in one of three different broad areas of expertise: Animisn, Marionettes, Rod Puppets as well as into miscellaneous areas. Puppetmasters gain access to one of these basic traditions at first level and may later pay 10 wonder point to gain the base access to one of the other areas, with further abilities/specializations costing additional wonder points. Each level, they may reassign one of their powers, though unwise choices may have unpleasant consequences, prerequisites no longer met resulting in a permanent negative level, making careful planning of these points of tantamount importance.

Let’s start with Animism: Upon choosing this path, the Puppetmaster gains int-mod wonder points to be spent exclusively in this category, but more importantly, they gain a doll-companion – Pinoccio gone bad if you will. And yes, that means they could create dolls that could serve as a mount. If such an animated doll is destroyed, it can 1/day be restored to half hit points  via the Craft (Puppet)-skill at 5 x level HP per day, with each HP requiring 1 round of repairs. Furthermore, unlike traditional companions, they require investment of more wonder points to level up, but if you invest up to 118 wonder points at 20th level, you get attributes of 30, 18,14,10, 10 to assign as well as 30 skill points. Animated dolls have up to +5 saves and 3/4 BAB-progression. Beyond these basic ways to advance the prowess of the doll, the dolls are also different depending on the base material they’re crafted from, with textiles being e.g. faster to repair, but resulting in a starting Int of 8 (and one skill point less), while Ivory puppets get more skills per HD, but actually cost 50 sp per point of repair. Bone, clay, horn, plant husks, porcelain, way and wood are also possible materials, all with benefits and flaws – kudos! A total of 45 (!!!) customization options to invest your wonder-points are provided, costing between 1 and 14 points and ranging from minor natural armor and the varying armor proficiencies to pincer, tentacle, talon etc. attacks and even sneak attack, pounce and complete magic immunity, the puppets counting as supernatural beings. Now unlike the often rather creepy summoner eidolons, puppet-customizations often are restricted to themes, making it e.g. impossible for a puppet to get both pincers and tentacles at the same type and requiring a base-form of the puppet that reflects creatures that conceivably could make use of the ability – a imho great way of blending fluff with crunch to ensure balance. By paying Puppetmaster level times 4 points, they may also bring an abandoned (due to refunding of powers etc.) doll back to life, which is a nice idea indeed, as is that the dolls remain active for a short while after the Puppetmaster has died, making room for dramatic roleplaying opportunities and interesting hooks.

The second discipline is completely different and grants dex-modifier wonder points – masters of marionettes. Holding a marionette requires one hand, manipulating it two hands – but what can they do? Essentially, they can force a creature of the type depicted by the marionette to make a will-save or be subject to his machinations: he can force the creature to do make an attack on his behalf, with d20 + Puppetmaster class level + dex-mod being rolled instead of the creature’s own. While conscious actions like power attack, arcanas or vital strike cannot be applied to the attack, passive bonuses like from weapon specialization still apply. Being underwater and its penalties to manipulation are covered, but NOT whether the subjects can be manipulated into attacking themselves. That’s a flaw in my book. Generally, though, these abilities can be put in two categories: Abilities that allow the beneficent manipulation of allies to grant them rerolls, usurp mind-control (or make sleeping characters act as if awake) or offensive, with iterative attacks of controlled creatures, forcing movement (for better or for worse), manipulate allies into casting spells and even make them stronger/grant them the ability to fly or breathe water via his mystic puppets. Overall, a VERY interesting take on an uncommon buff/debuff-focus.

Finally, puppet masters get the option to employ rod puppets to tell stories, some of which require two rod puppets or rod puppets of a specific type. One hand is required per puppet. When taking up this profession, the Puppetmaster gains cha-mod wonder points and the effects of the story target all creatures within 30 ft that can see or hear him. In order for them to work, the puppet master has to succeed at respective story-checks, i.e. d10 + class level + cha-mod. The high teh ten-digit of the check, the greater the respective benefits. Ranging from 4 to 15 points in required wonder points, the myths and stories are perhaps closest to bardic buffs, though e.g. the interesting 1-in-20-chance to not expend spells, spell-like abilities and X/day-abilities that even takes shadow jump and similar abilities into account and some of the others are distinct enough to make these stand out sufficiently.

Finally, there are miscellaneous ways of spending wonder points not aligned with the 3 disciplines, granting enhancements to dolls, more spells known, a backpack to stow and retrieve puppets faster, gain a synergy AoO with his puppets and carry a tiny workshop around that shrinks them – and yes, rules for falling out/being inside while the replica is shaken are covered!

The pdf also covers the Puppetmaster’s spell-list as well as options for having to still learn the craft, stats for non-animated puppets, craft DCs and required materials as well as the option to create puppets that are beyond masterworks, remarkable puppets.

Editing and formatting are very good – though I stumbled across a wording during my lecture of this pdf, the class is mostly concisely phrased and thankfully unambiguous in its rules, though careful reading is admittedly required due to the complex nature of the class. Layout adheres to Dreadfox Games’ parchment-style background in beige with its b/w-thorn-borders and the full color artwork depicted on the cover is neat. We also get 2 b/w-pencil drawings that are original as well. The pdf comes with full bookmarks and e.g. the spells are bookmarked in a nice unobtrusive way to d20pfsrd.com.

Now granted, this class is not for everyone. The Puppetmaster can easily be considered wonky if in the wrong hand – but he could also be creepy as hell, beneficent, tragic – the concepts are wide in scope and the execution rather professional. Make no mistake, this is an advanced class if I’ve ever seen one, making the summoner pale in comparison, not in power, but in options. While the wonder pool could have used a slightly more concise explanation on how it works, after you got the hang of it, it indeed is a cool resource that offers a wide flexibility between pets, manipulation and buffing, making the Puppetmaster a class that will result in widely varying playing experiences. The mechanics and the concepts used by this class are complex, but also rewarding in the benefits they grant as well as in the style of the respective abilities – if you’ve ever played Metal Gear Solid 4 and considered Screaming Mantis creepy – well, here’s the chance to play something akin to that!

Mechanically and balance-wise, this definitely is one of the most interesting classes I’ve seen come out of PFRPG and one that strays quite a bit from established class designs – and is better off for it. The one thing I’d criticize is the lack of true capstone abilities for the respective sub-crafts, but in the end, that is a minor flaw. So, apart from minor complaints about more concise wording all’s great? Yes. Yes, indeed. The Dreadfox lead-designer Reid Stewart has learned to take environmental factors into account (though I would have loved to see these influencing puppets based on material) and as a pdf that introduces the base-class, this works very well. So much so, in fact, that I’m not even missing archetypes or supplemental feats. The class is varied enough to work for now without them and provide a plethora of different gaming experiences. The price point, when compared to e.g. the Ritualist, is also more in line, offering about twice as many options as that one. While still not cheap at 5 bucks, the class is one that should be considered worth the investment if the idea remotely intrigues you. I’ll even go so far as to ignore the minor hick-up that fails to specify whether manipulated creatures may attack themselves and use the default “reroll save at +4-solution” established by enchantments. My final verdict – due to the minor hick-ups here and there and the price-point 4.5 stars, but still gladly rounded up to 5 this time.

Let them dance on your strings and get the Puppetmaster here on OBS!