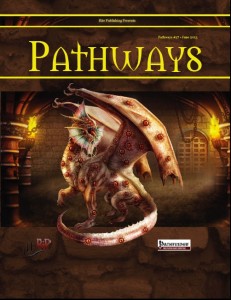 The latest installment of Rite’s free e-zine Pathways is 39 pages long, 1 page front cover, 1 page ToC, 12 pages of advertisements and 1 page of SRD, leaving us with 24 pages of content, so let’s take a look!

This time around, David Paul’s editorial is about cool products (and free, linked spin-offs!), so I encourage you to check it out!

After that, we’re introduced to the Watchman creature template by Steven D. Russell, whose sample CR 19 creature is lavishly illustrated on the cover by Keith Seymore. The template per se is rather cool, blending deadly gazes with vulnerabilities and clocking in at CR +2 – weirdly, though, one table that’s part of the template looks smudged and blurred.

Heroes of the Jade Oath introduced us to the new Feng Shui-skill and Thomas LeBlanc has five feats based on the skill – while the skill per se is reprinted, the table is so tiny I can’t make out a thing, so if you do want to use these, you probably should own HotJO. Using Ch’i to get +2 (or +4) to skills and ability checks, +2 to non-combat social skills, gain +1 to atk for each ally flanking a foe when using Feng Shui as an immediate action, replace Perception-checks with Feng Shui-checks to notice traps or even noticing haunts becomes possible thus. Though honestly, the first 3 feats feel disjointed from Feng Shui for me and overly complicated for the relatively bland benefits they provide. A tighter focus on actually using the skill would have been nice there.

Thomas LeBlanc strikes again after that and delivers an article that is all about Will McCardell’s Apeiron Staves (for an explanation what these are, check my review of the Genius Guide to Apeiron Staves) – we get the new flux field and sickly apeiron staves as well as a short 3-level PrC, the Adept of Staves, who gets d6, 2+Int skills, club and quarterstaff proficiencies, +1 BAB and saves over 3 levels and full spellcasting progression. The class may use magical staves as melee weapons, use charges to power cha-based skill-checks and may convert apeiron charges into spells they had prepared7may spontaneously cast – at spell level x2 charges cost. We also get 2 new feats – one allows the apeiron user to 1/day sacrifice 2 points of con as drain to get spellcasting attribute modifier charges. The second feat allows you to create sentient, intelligent apeiron staves. Neat indeed – though I’d be very careful with making apeiron staves intelligent…The rules for intelligent items and apeiron staves already are complex enough and adding caster level-questions etc. to the fray requires some massive crunch mojo that probably not every DM is willing to do.

After that, we get a preview of 101 Not so random encounters: Winter by Mike Welham – more on that in my upcoming review of that one.

This issue’s interview is with Bradley Crouch, whom some of you may know from his own company, Interjection Games and his rather imaginative take on tinkering. An interesting interview, for sure.

The final part of the pdf, as always, is taken up by reviews, this time by Aaron H., Megan Robertson and humble yours truly.

Editing and formatting are very good, I didn’t notice any significant glitches. Layout adheres to RiP’s two-column standard and the cover artwork is awesome, the rest of the artwork consists of thematically fitting stock art. The tables in this issue are ill-fated – both feature some issue that makes them problematic. Another minor issue would be this issue’s lack of bookmarks – while not glaring, it makes navigating the pdf slightly more work than it should be.

This pdf is FREE and especially Thomas LeBlanc’s supplemental material for the awesome Apeiron Staves makes this well-worth the downloading. That being said, this issue does feel slightly less polished than what I’ve come to expect from Pathways – while still very much worth the space on your HD, it still features some flaws I consider avoidable and thus I’ll settle on a final verdict of 4 stars.

Get this magazine FOR FREE here on OBS and here on d20pfsrd.com’s shop!