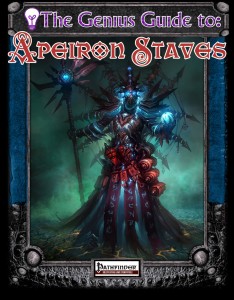 The supplement kicks off with a discussion on the basics of Apeiron Staves, where the word comes from and finally, why Apeiron Staves have been created – a massive design-rationale is given, including a sidebox etc. – but why? Because Apeiron staves are not merely spells in a can, they change the dynamics of combat, but more on that later.

The description of Apeiron Staves e.g. can hint at its functionality and spellcasters may recharge the up to 20 charges these staves can hold by expending spell levels on a one by one basis when a caster prepares spells – i.e. pumping a 2nd level spell into the stave nets 2 charges. Furthermore, Apeiron staves have effects, which can be produced an unlimited amount of times per day, whereas augmentations, if applicable, can also be added to the effect – up to 2 augmentations can be added, though all augmentations cost charges. Finally, the staves get so-called sacrificial powers, which are activated by feeding spell-slots to the staves. It should be noted that each staff comes with full cost to create/construction requirements etc.

That may be abstract for now, so let’s take a look at the sample staves provided, shall we? Take the Apeiron Staff of Defense, the first of the staves – activating (which is btw. a standard action) it allows you to grant an ally within close range +1 to AC or to CMD for one round. This effect may be augmented by expending charges to grant en additional ally the bonus for one charge, cloak the ally in the effects of blur (2 charges) or grant the ally +2 to saves for one charge. The sacrificial power allows to grant the ally a dodge bonus to AC versus AoOs equal to the level of the spell sacrificed.

Essentially, these staves allow magic wielders to do something apart from burning spells when in combat and the staves actually allow for a decent variety of options that don’t require expendable resources – which is cool. But the interesting part, at least for me, starts when taking a look at the Apeiron staves of force – from beginner’s to greater, we get 4 of them. The beginner’s staff has the unlimited effect of shooting force damage missiles (that count as magic missiles) at foes in close range – these only do 1d3 damage, thankfully, though, and have a cooldown of 1d2 rounds, making sure that the unerring missiles do not invalidate regular ranged combat. You can expend charges to eliminate the cooldown or add spellcasting attribute modifier to damage. The lesser staff already deals 1d4 + caster level and gets a 1-round cooldown – again, the cooldown can be ignored by expending charges, but now you alternatively can extend the damage to foes adjacent to the hit creature – which is a bit weird. Huge foes can have much more creatures adjacent to them – does this mean that e.g. targeting a giant in a unit of hobgoblin infantry-men would deal this damage to more creatures than e.g. shooting at a regular creature in the unit?

Honestly, not sold on that one – perhaps a caveat à la “hit additional creatures equal to your spellcasting attribute modifier” or something like that would make the augmentation make more sense. For 4 charges, the bolt may make a bulrush attempt – at range, without fear of repercussion. This is a pet-peeve of mine and while the 4 charges required are a massive investment of resources, I’m not 100% sold on it– a similar design-issue as the one I had with the Battle Scion’s Force Blaster archetype. At least the amount of charges expended plus the fact that only one of the augmentations can be used per activation limit this one’s potential for power gaming. It should be noted that this one and its greater variants can have spells sacrificed to extend the range of the blasts. And while I’d usually start complaining, hard, about unlimited force missiles, the fact that the range is this short and that, when taking the wealth-by-level guidelines into account, these staves are not particularly cheap (the lesser staff already clocking in at 3750 GP), I actually can see them work – and since I happen to have a low level group at the ready, I think I’ll try the beginner’s staff. Though I probably will get rid of that ranged combat maneuver option at higher levels – it’s a particular option I personally consider broken, even at short range.

Buffing allies with Staves of Glory, shortening negative conditions by 1 round via one of the three staves of soothing or healing the allies, summoning a (thankfully weak) spiritual ally, a very limited (350 GP – what do you expect?) beginner’s staff or a commander’s staff that lets you designate squares – allies passing through said square get bonuses. Neat idea for tactical combat!

The pdf also provides us 4 feats: One that allows for the sacrificed spell level to count as +1, one that makes the staves regain charges automatically (though slowly), one that nets you +2 to overcome SR when using them and the item creation feat to make them. The pdf also offers short pieces of advice when combining them with rune staves from SGG.

Editing and formatting are top-notch – I didn’t notice any significant issues apart from the minor naming inconsistency. Layout adheres to SGG’s 3-column full-color standard and the artworks, as we’ve come to expect from SGG, are awesome and while you may know some from other publications, generally this is one neat pdf to look at. The pdf thankfully comes fully bookmarked.

“Unlimited” and “Magic” are two words that usually make me very weary of whatever follows and after reading the concept, I was all but positive that I’d hate this pdf, that I’d rip it a new one and already started thinking about the precise wording of my “This is Op-rant”. Thankfully and surprisingly, though, for the most part I really, really liked this pdf and its staves. For one, the massive range limitation means that the party’s ranged combat sniper/gunslinger/ranger/whatever won’t feel invalidated by the Apeiron staves, one of my primary concerns. Secondly, the pricing means that these staves remain a significant investment – but one that the players will not regret – whereas as wand of magic missile is a fire and forget item, a Beginner’s Apeiron Staff of Force may deal less damage and at closer range, but it is permanent and more versatile – and that is essentially this product’s achievement: Giving casters something to do without necessarily burning through their spells and without outshining e.g. archers and melee characters in their damage output.

I’m honestly and wholeheartedly impressed by this pdf – it provides some elegant staves full of cool options and does so without generating gross inequalities in balancing. So all’s glorious? Almost. Designer Will McCardell has done a great job, but a) I would have liked more of them (sequel???) –though that’s not too significant a complaint and should be taken as a complement instead. What really irks me, though is b) – there are no guidelines to create Apeiron staves yourself and price them properly.  And believe me, you WILL want to create more of them. Here is more potential – what about special tige vierges for Apeiron Staves, for example? Or Legendary Apeiron staves that get new augmentations/sacrificial options with levels? That would be oh so awesome…

So yeah, that’s the one and only fundamental flaw I could find, though I still will not allow ranged combat maneuvers via force blasts in my game. In the end, I can’t hence rate this the full 5 stars. What I can do though, is recommend this as a 4.5 stars, rounded down to 4 + seal of approval-pdf: The concept is AWESOME and I encourage you to check it out and SGG to make more – fast! 😉

Check out these staves here on OBS and here on d20pfsrd.com’s shop!