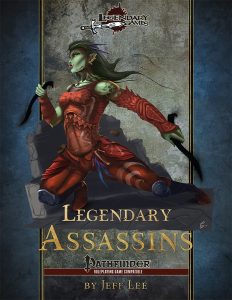 The assassin-PrC has captured the minds of gamers and GMs alike ever since its 2nd edition kit…but, alas, if there is one thing that holds true for the concept, it’s that its rules-representation standard in 3.X and, subsequently, the Pathfinder-iteration, just don’t do the job that well. The pathfinder PrC is hampered by having been released at a very early stage in the system, which rendered it…well, not too captivating, as it inherited the weaknesses of 3.X’s takes on the concept. From Kobold Quarterly’s second issue back in the day to Green Ronin’s highly evocative Assassin’s Handbook back in the day, there have been many attempts of making an assassin base class, but in 2016, we saw not one, but two that stand out: Number one would be Purple Duck Games’ “Assassins of Porphyra“, which created an intriguing prestige archetype concept. Number 2 would be the PHENOMENAL Assassin-class by Interjection Games, which employs an extremely rewarding maneuver-engine that just blew me away. Both, however, do have in common that they represent base-classes.

It is interesting, in this context that this pdf represents the first attempt I know of to salvage the assassin as a PrC. The first step towards this endeavor the pdf undertakes would be that it, after elaborating on the origin of the term and its original usage, to eliminate the nonsense evil-only restriction. In a world where murder-hobo-ism is a driving factor of economy, limiting assassins to be evil only always felt weird. (Heck, that’s probably why the Book of Exalted Deeds back in 3.X had a “good killer”-PrC…). Prerequisite-wise, a BAB of +3 and 3 relevant skills at 5 ranks are what it takes to become an assassin as per this book, with the PrC providing d8 HD, 4 + Int skills per level, 1/2 Ref-save progression and 3/4 BAB-progression. Additionally, the PrC nets proficiency with all standard crossbows (light, hand, heavy), daggers, darts, rapier, sap, shortbow (normal + composite), short sword and light armor. It’s a bit weird to see the garrote missing from the list, but oh well. The class can cast arcane spells while in light armor sans spell failure. At 1st level and every odd level thereafter, the assassin gains sneak attack +1d6, but may forego this progression in favor of spell progression or a bonus combat feat – big plus here, since this means the PrC retains relevance and diversity for more base classes!

Starting at 2nd level, the assassin chooses one type of effect from a list, like disease, divination, etc. – she gains +1 to saves versus such effects, +1 every two levels thereafter – I think that should be class levels, but I may be wrong and in dubio pro reo means that I won’t hold that against the pdf. 2nd level also nets uncanny dodge, with 4th level providing hidden weapons and true death. As a minor nitpick, the spell reference to remove curse in the latter ability has not been properly italicized and the verbiage is fully functional, but slightly nonstandard. 5th level nets improved uncanny dodge, 6th level Quiet death, 8th level Hide in Plain Sight, 9th level swift death and 10th level, angel of death. Death attack and poison use are gained, just fyi, as we’ve come to expect at 1st level of the PrC. The former is modified, though: 3rd and 5th level reduce the amount of study required to execute death attacks by 1 round.

Here is where player-agenda falls into place: At 1st level and every odd level thereafter, the assassin-PrC presented here may select an assassin talent from a list of 27 available selections. These allow for scavenging or further progressing of previous class tricks like the gaining of a rogue talent, a ninja trick, counting as fighter-levels for feat prereqs, continued wild shape progression, etc. Forcing foes to roll Sense Motive twice and take the worse result versus the assassin’s Bluff, increased DCs for poison-based magic, dealing sneak attack versus grappled foes (With the right build, that’s a serious ouch!) – there are some serious tricks here. Characters with channel energy may expend one attempt of the ability as part of a death attack to auto-confirm threats and bypass the target’s DR if he is on the opposite end of one of the alignment axes. I’m right now hearing “God punishes, I kill” by Iron Mask blaring inside my head…powerful, yet circumstantial and thematic. Nice. As a whole, these talents focus on diversifying the PrC and making the multiclassing into it from different backgrounds more rewarding…so yeah, kudos!

Speaking of options: A total of 9 feats have been provided, which should also prove to be useful from Red Mantis killers – while the feats have been stripped of references to that closed Golarion IP, adding temporarily the fiendish template to your mantis form is a nice bit. Summoners can take a feat to lend the benefits of their assassin class features via bond senses to their eidolon, which is very strong and, with minimum level 3rd in the PrC, justifiably reserved for higher level characters. Adding sneak attack to a familiar’s delivered touch spell is pretty potent. Beyond these the usual extra talent, increased DC, etc. numerical upgrades can be found. Making poison stick longer to a blade, assuming mantis swarm shape or increasing death attack DCs via ki-expenditure make for nice tricks.

Now, with the prominence of Game of Thrones (say what you want – I still prefer the books…) in TV, it should come as a pleasant surprise that this pdf contains an archetype for the PrC, namely the Many-faced killer. “This is does not have a name.” These guys have an alternate array of requirements regarding feats and skills – I assume that these are replacements for the regular assassin-prereqs, not additional ones, but I am not sure. Instead of death attack at 1st level, these guys gain class level to Bluff, Disguise and Sense Motive, making them experts at intrigue and social subterfuge. Fret not: Death attack is still unlocked, only at 3rd level, where it replaces the assassin-talent. They can apply disguises in half the time and reduce penalties for other races, with 2nd level providing quick change. 4th level replaces true death with at-will alter self, and 5th level provides untrained skill use of skills pertaining to cover. 8th level replaces HiPS with the option to masking his alignment or emulating others, with 10th level allowing for the at-touch subsuming of a helpless creature’s aura and identity, fooling divinations etc.

The pdf concludes with 3 sample NPCs, which highlight different means of using the PrC – a CR 10 iron-arm enforcer (monk/assassin), a Cr 8 cultic purgaton (necro/assassin) and a CR 12 rogue/many-faced killer build. Each sports a bit of fluff and advice on using them.

Editing and formatting are good, I noticed no glaring issues. Layout adheres to Legendary Games’ two-column full-color standard and the pdf has some nice artworks, though fans of LG will be familiar with some. The pdf comes bookmarked for your convenience, but has no nested bookmarks, only basic ones that point, for example to the feat-section.

Jeff Lee’s take on the assassin-PrC makes it a viable, strong option one certainly can consider from a PC-perspective. From getting rid of the dumb alignment-restriction to the increased multiclassing-support, the pdf significantly improves the PrC. While the slight prereq-confusion with the archetype is a bit of a hassle, that’s not something I’d consider an issue. This pdf certainly achieves its goal and I’d be singing more praises if the aforementioned base-class iterations had not already taken the assassin-concept to a level that surpasses what this pdf can deliver with its improved chassis.

Personally, I enjoy the complex and extremely rewarding maneuver-management of IG’s class to a point where I don’t ever want to play a vanilla assassin again. That being said, this prestige class will still see use in my games, namely whenever I have to pit an NPC with assassin-levels against my group and don’t want to fully redesign the statblock. Due to being pretty much compatible with the original, this is extremely useful even if you’re like me and prefer another, full base-class-take on the assassin. As such, this may not reach the highest echelons of amazement for me, but it will remain a nice and handy tool in my GM-arsenal. As such, my final verdict will clock in at 4.5 stars, rounded up for the purpose of this platform.

You can find Interjection Games’ maneuver-based assassin base class here on OBS!

(Mind you: All 3 do something completely different and coexist pretty well!!)