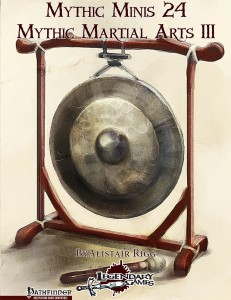 This Mythic Mini about martial arts provides 9 new mythic martial arts, so what do we get?

-Dragon Style: Immunity to sleep, +1/2 tier bonus versus stun/paralyze etc., +5 foot reach for one attack per round, Gain/Improve darkvision and blindsense for mythic power. Solid!

-Dragon Roar: Use Mythic Power instead of stunning fist to deal damage with your roar and impose negative conditions. So friggin’ awesome!!!

-Mantis Style:Target must roll twice, take the lower result and you may add effects via mythic power- lethal!

-Mantis Torment: Use mythic power instead of Stunning Fist for increased DC, duration and fatigue/exhaustion on failed saves. OUCH!

-Snake Style: I hate the base style witha  fiery passion. It’s an example of bad design. That being said, +1/2 mythic tier and quicker activation is okay and my loathing of the base feat is nothing to hold against the mythic version.

-Snake Fang: 1/round Sense Motive versus attackers Bluff if the target misses you. On a success, use Sense Motive for an attack roll. If it misses, expend mythic power for an additional attack roll. Urgh. I *loathe* skill-attacks. It’s not the fault of this pdf, but….urgh.

-Snake Sidewind:+ 4 CMD versus many maneuvers while in snake style. Use Mythic Power to use sense motive in lieu of a save. Also: When criting, you may 5-foot-step as a free action for a mythic power, even if you already have moved this round.

Alistair Rigg delivers some glorious takes on 3 traditional styles here and gaining more content than in part 2 is awesome…but not for me. I consider Snake Style and its whole mechanics a broken, broken mess and think that Paizo botched big time there. I don’t even have to try to break this. Now Alistair Rigg worked with what he got – so I can’t fault him for what he did with the feats, but still, every time I read these, something in me cringes. Hard. That being said, the other styles are awesome enough to still make this a good purchase, even if you loathe Snake Style. My final verdict will hence clock in at 5 stars.

You can get this nice little pdf here on OBS and here on d20pfsrd.com’s shop.