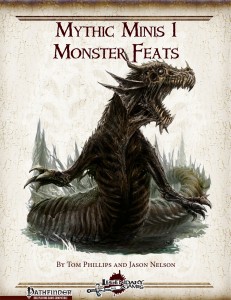 This supplement is 3 pages long, 1 page front cover, 1 page SRD, 1 page content, so let’s take a look, shall we?

So here we get mythic feats for monsters, so what do they do?

-Ability Focus (Mythic): Increased the bonus to the DC granted by ability focus by +2, use mythic power to force targets to roll their save twice, taking the worse result.

-Improved Natural Armor (Mythic): Increases natural armor further (depending on how often the non-mythic feat has been taken) and reduces bleed damage, even attribute bleed. Okay, but feels a bit underwhelming for a feat-slot, particularly for a mythic feat.

-Improved Natural Attack (Mythic): Increase damage for natural attacks enhanced by the non-mythic version of the feat and use a swift action to ignore up to 15 points of DR for mythic rank rounds.

-Multiattack (Mythic): Secondary natural attacks become primary natural attacks. When hitting a creature once with each natural attack in 1 round, spend 2 uses of mythic power for mythic rank times 1d4 damage. I assume this stacks with bonus damage from rend, if available.

-Multiweapon Fighting (Mythic): Gets rid of the -2 TWF-penalty for the primary hand and allows you to make a free non-AoO disarm or sunder attempt at +8 to CMD when hitting with both weapons in the same round for one mythic power.

-Snatch (Mythic): Use 1 use of mythic power as a swift action when making a grapple-check. Upon success of the maneuver, the target is automatically pinned and the penalty to AC is increased by mythic rank of the grappler.

Editing and formatting are top-notch, I didn’t notice any glitches. Layout adheres to a beautiful 2-column full-color standard and the pdf has no bookmarks, but needs none at this length.

Authors Tom Phillips and Jason Nelson have created some Mythic versions of the most common monster feats, of monster feats that see A LOT of use. The variants are generally well-crafted, have solid mechanics and generally are well-worth the taking. That being said, they also are universally predictable and do what you’d expect them to. We get a solid nice little supplement, very useful and well-crafted, but no instance of truly astounding rules – hence my final verdict will clock in at a hearty recommendation for Mythic DMs at 4.5 stars, rounded down to 4 by a margin.

You can get this nice little supplement here on OBS and here on d20pfsrd.com’s shop!